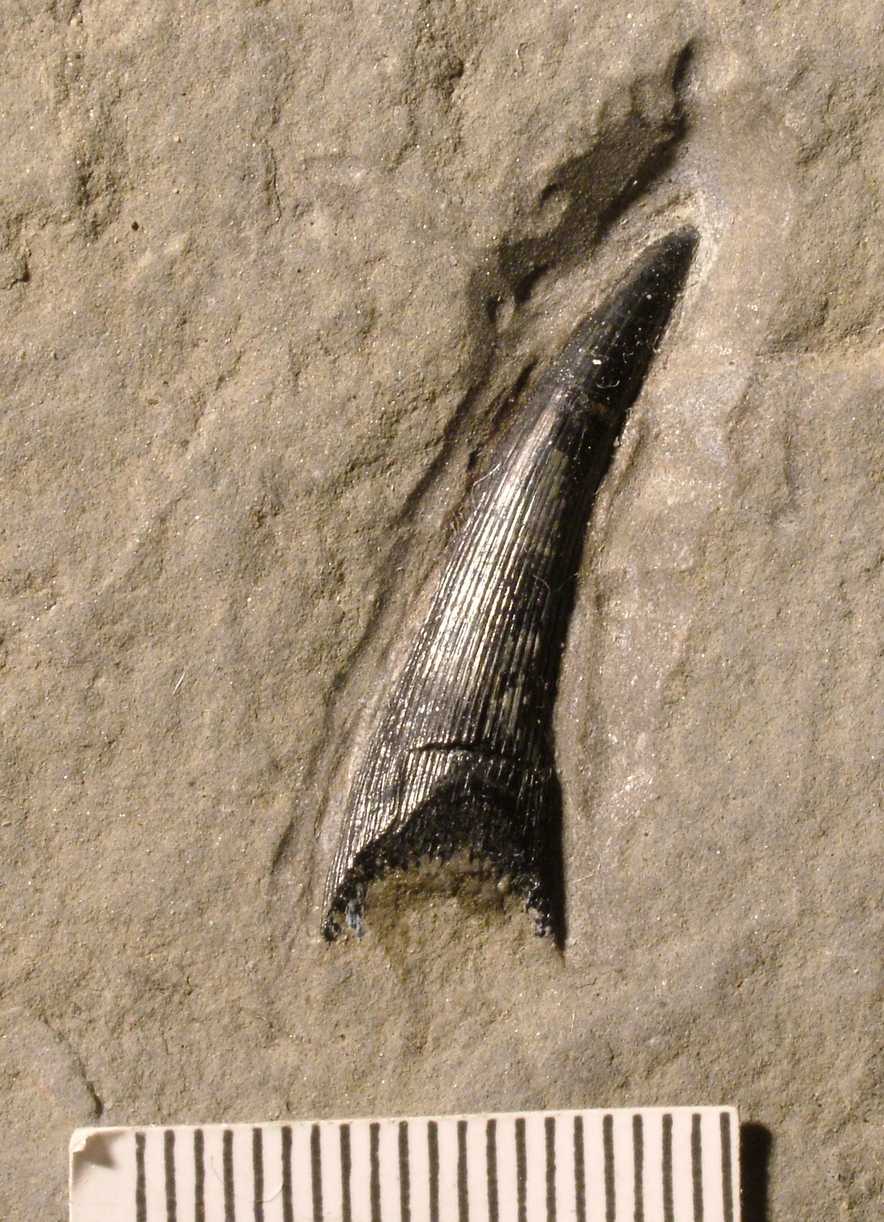 A big tooth from Asperocephalus milleri.

This porolepiform fish, received its new name by Per Ahlberg in his 1989 unpublished thesis on Glyptolepis from Scotland (see references). It is one of the biggest fish in the lake and a fierce predator. The fish is very rare, as is often the case with predators at the top of the food chain. More work needs to be done on this species. This porolepiform can be compared with the genus Laccognathus from Latvia and Estonia and more recently from Canada, (Downs 2011).

In the collections of the NMS an almost complete head of this species is stored. On the ventral side some scales are visible (see one figured below). This head was first described by Thomson in 1966 as Glyptolepis paucidens. Typical for the scales of this species, is that they have only tubercles and no ridges running from the centre to the scale to the edge, like the scales of Glyptolepis. In the general part on porolepiforms, a thin section through a scale (see below) is shown.

Here we show a picture of such a scale. The dermal plates are also covered with tiny tubercles while the plates from Glyptolepis are smooth. 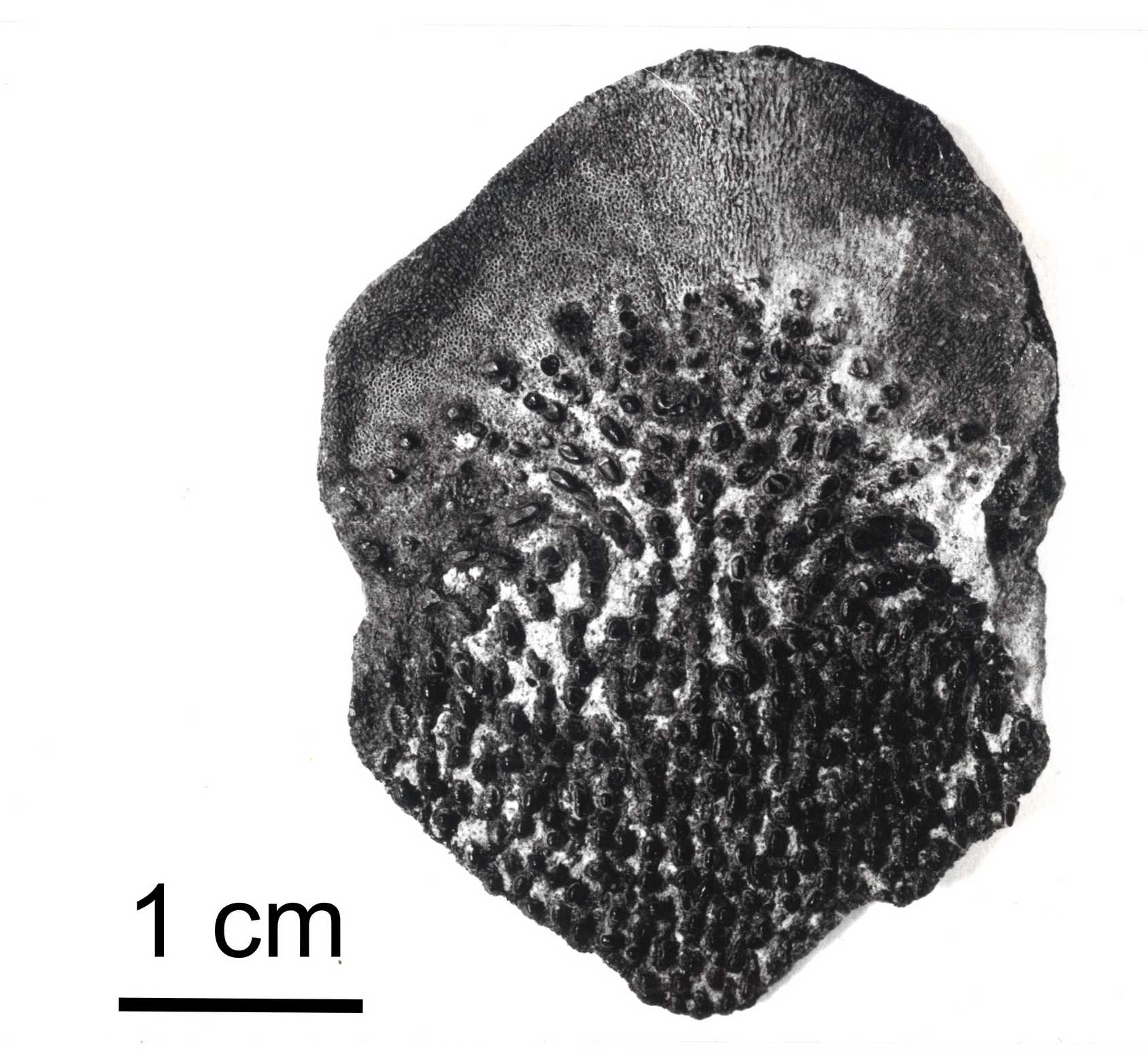 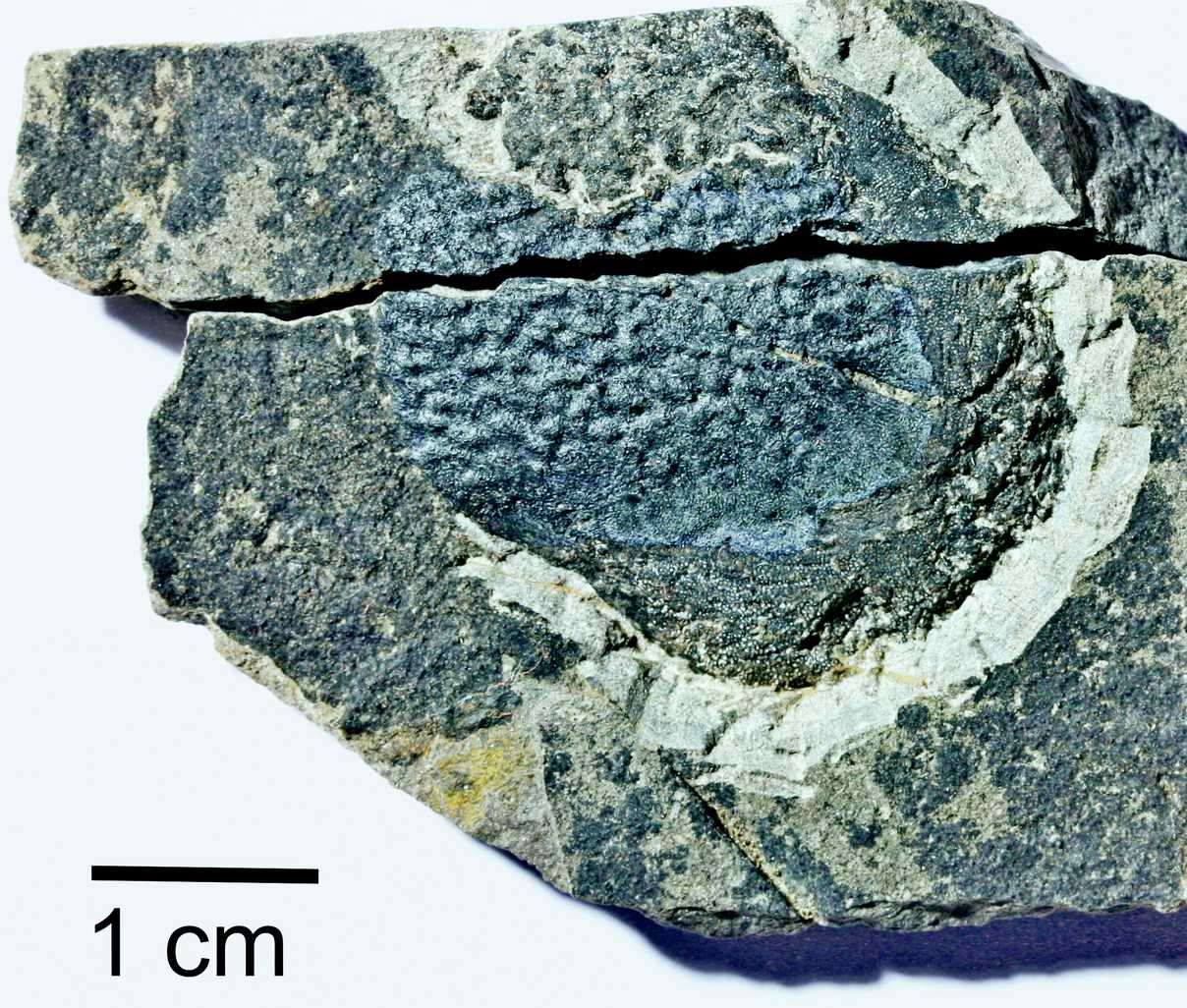 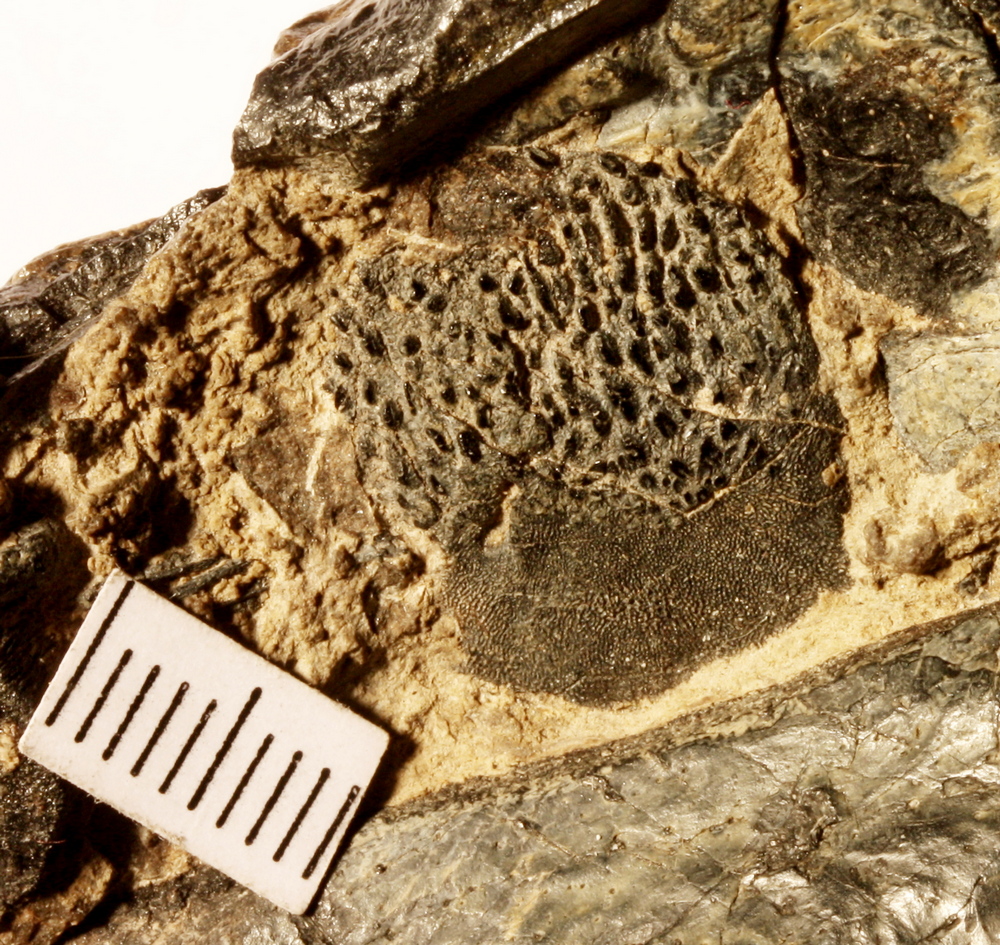 Scale on back of big head described by Thompson 1966, NMS ©.

Incomplete lower jaw seen from the outside, figured by Hugh Miller in 1849, in ‘Footprints of the creator: the Asterolepis of Stromness.’ Hugh Miller found several plates of Homostius, scales of Glyptolepis and the lower jaw figured above and determined they all belonged to the genus Asterolepis. Asterolepis was known from the Old Red Sandstone from Russia and was described by Eichwald in 1840. Probably, Miller did not have access to the papers and books from eastern Europe and Russia. In his book the ‘Asterolepis of Stromness’ he describes three different species as belonging to Asterolepis, but the big dermal plates figured belong to Homostius milleri, the scales to Glyptolepis paucidens and the lower jaw figured (above and below) to Aspherocephalus milleri. See also on this site: page on placoderms, antiarchs and Asterolepis.

Incomplete lower jaw seen from the inside, figured by Hugh Miller in 1849. Miller also figured a lower jaw of Glyptolepis as a jaw of Asterolepis, see below (original drawing and text).

The lower Jaw figured by Hugh Miller in 1849 (collections NMS ©).

Same jaw as above seen from the inside. 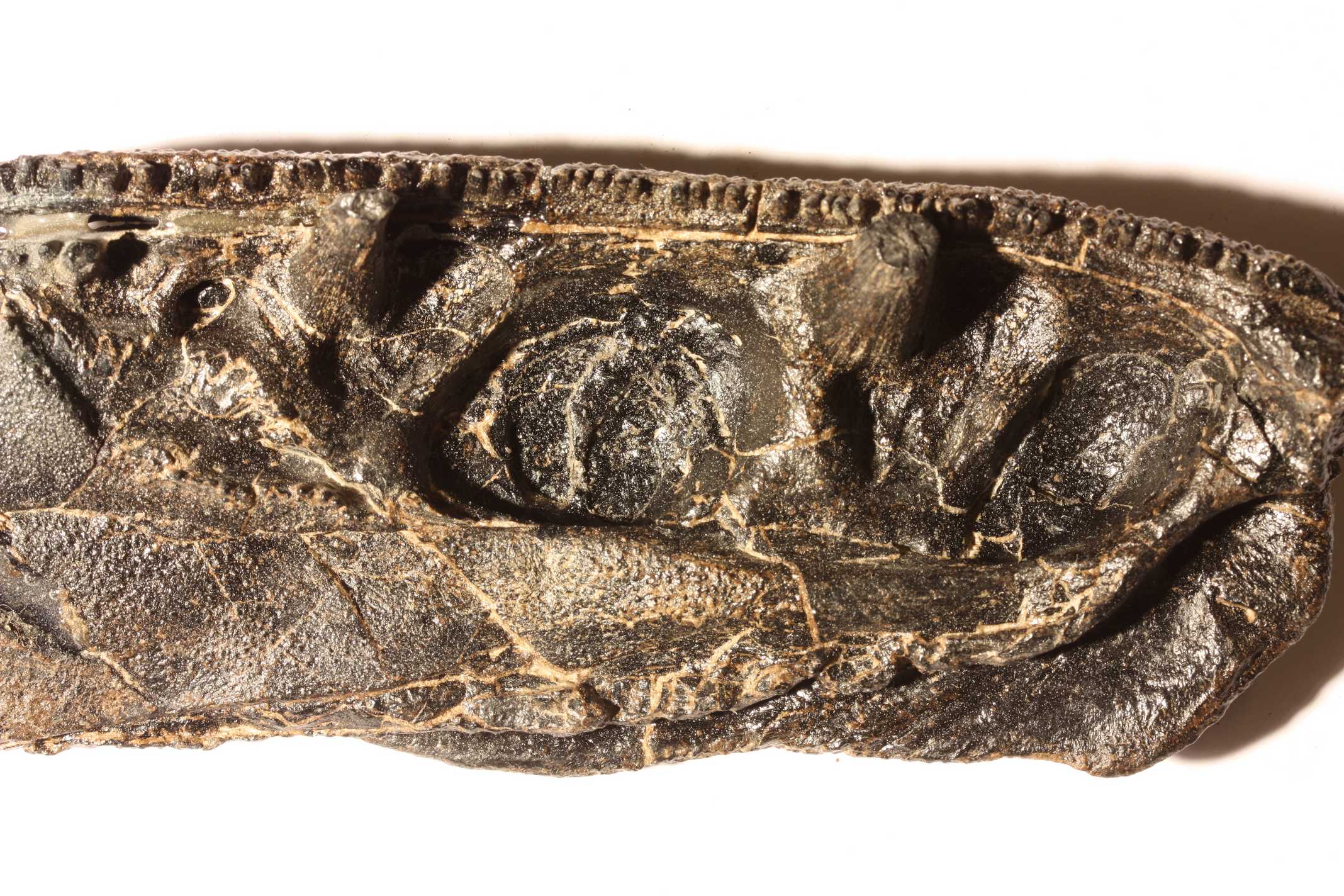 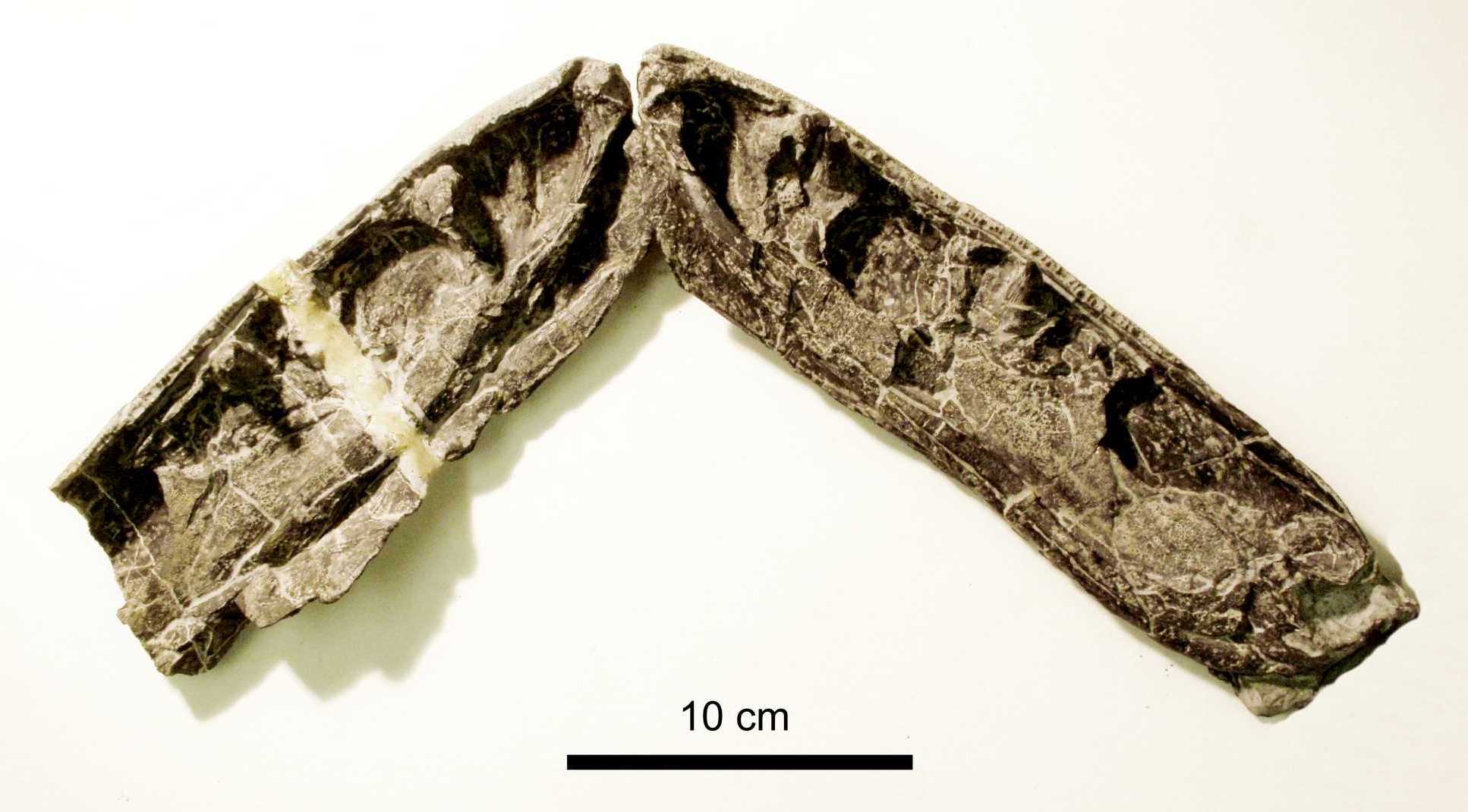 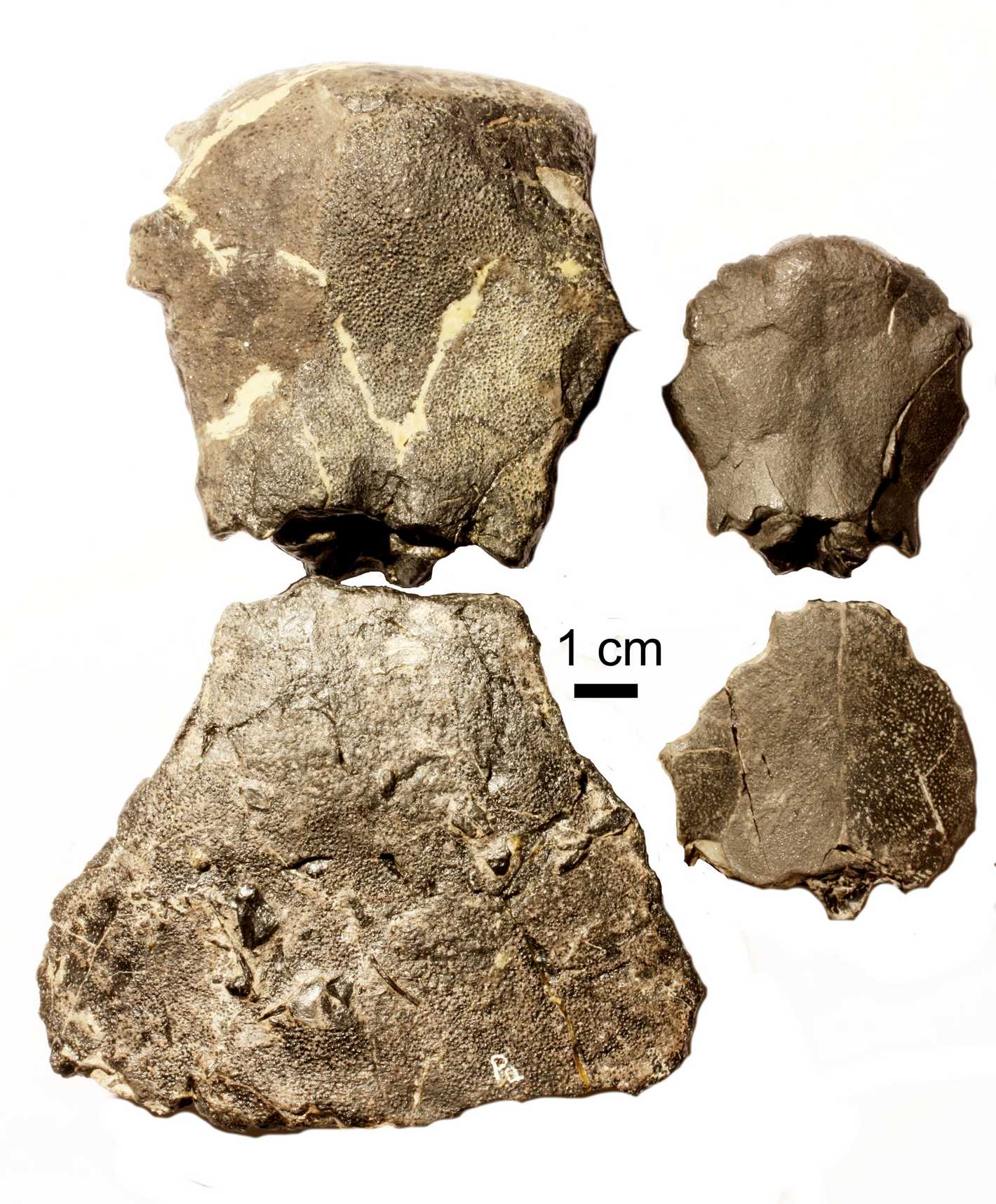 Parietal and post parietal plates seen on the outside, compared between Aspherocephalus milleri on the left and Glyptolepis paucidens on the right. P: parietal, PP: post parietal. (collection NMS ©). 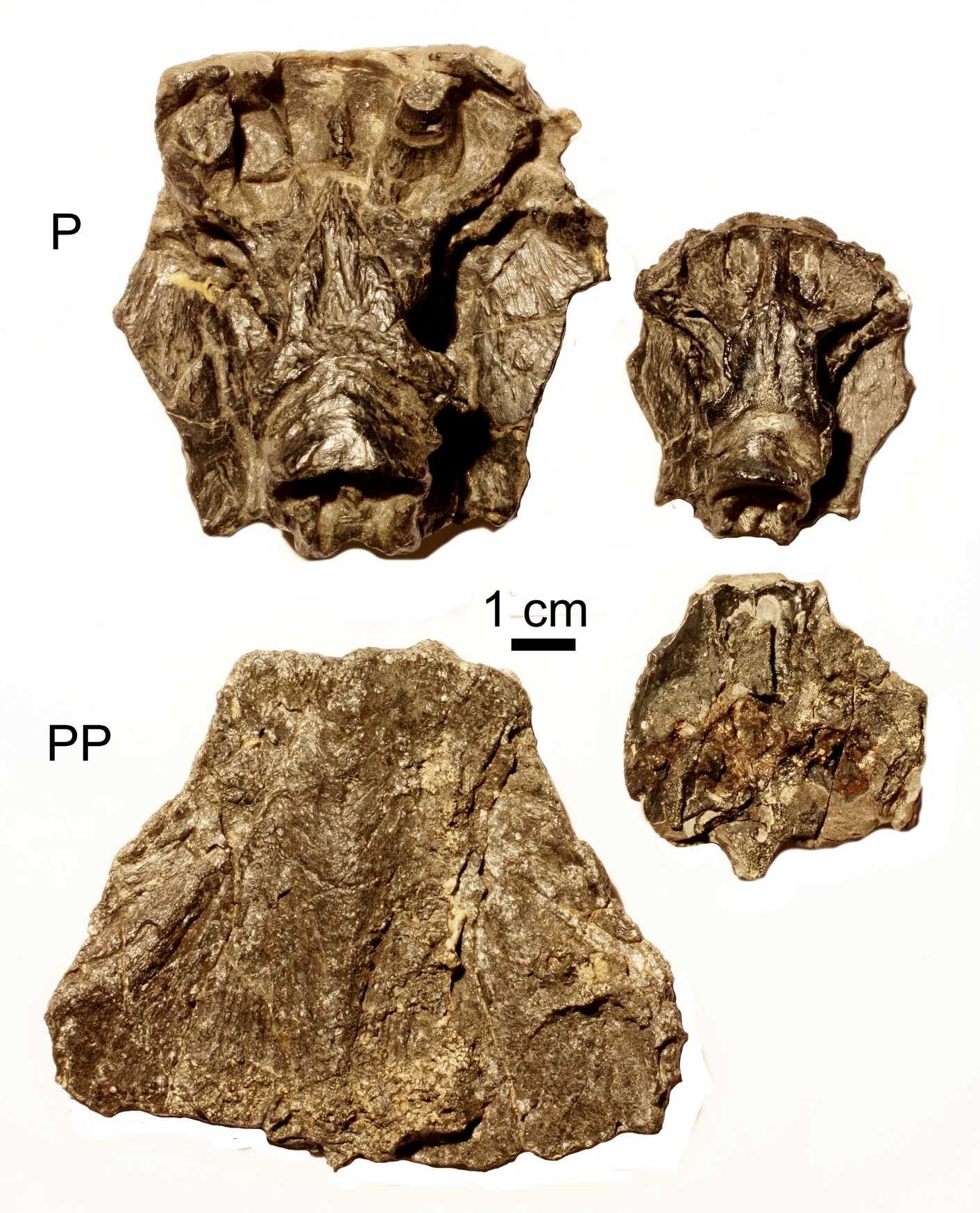 Parietal and post parietal plates seen on the inside, compared between Aspherocephalus milleri on the left and Glyptolepis paucidens on the right. P: parietal, PP: post parietal. (collection NMS ©).