Cliffs are shaped by waves acting on complex rock structures. The nature of wave action varies according to the sea state and to the sea bed topography. Waves may arrive at cliffs breaking, plunging and, in deep water, unchanged and different processes of erosion occur under each condition. The up-rushing water from waves impacting on the cliff itself generates powerful hydraulic forces and the deluge of water on the cliff top washes and removes loose debris to create a scoured zone. During big storms, debris is removed from the edge of the cliff top and washed inland to form spreads or ridges of boulders. These cliff-top storm deposits give way inland to dumps of angular gravel and finally turf littered with pebbles and granules of air thrown debris.

Cliffs also can be regarded as rock walls subject to all the forces of rock mechanics. The cliff is affected by mass movement, especially by processes associated with lithologies with high rock mass strength. The cliff faces above the limit of common wave wash is also subjected to weathering. The influence of salt water spray may be particularly important here.

Definition: subaerial processes of fall, slide, flow and creep that transfer debris to the foot of a slope

On the variably fractured, hard rocks of the outer coast of Orkney, the dominant processes of mass movement are fall and slides. Minor rock falls occur frequently, as shown by the scars left by the fallen blocks that contrast with the black staining of more stable surfaces. Larger slides are rarer but it is surprisingly common to find signs of incipient major rock slope failures on cliff tops. The pulling apart of the rock slopes as it tilts or slips seawards is marked by gulls – deep and narrow gullies above the cliff head.

The till cliffs found on more sheltered shores are susceptible to slumping. Where the base of the till passes below sea level then slope failure can occur along curved slide planes. More generally, till rests of rock terraces and ramps and here the rock acts to support the till face. The rate of cliff retreat is determined by the removal of debris from the base of the till. 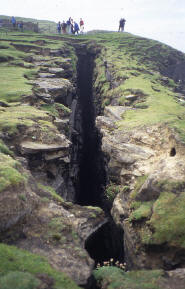 A deep cleft on the west Rousay coast, the site of future cliff face failure