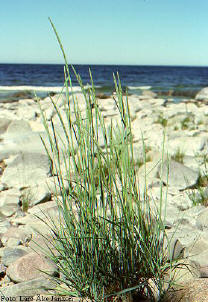 Dunes form when deposition by wind on the upper beach develops low mounds that stand above the limit of wave action. The drift line has annual salt-tolerant plants like Sea Rocket and Oyster Plant. Other pioneer species, notably Sea Lyme Grass (Leymus arenarius), colonise and bind the embryo dunes and allow the retention of moisture. Marram then gains a foothold and its shelter leads to the trapping of more sand and the eventual emergence of fully-developed dunes.

The scale and character of the dune system depends on the combination of physical factors, such as the wind and wave regime, the sand supply from the beach and offshore bars, and biotic controls, such as plant succession and grazing pressure. Unconsolidated sand is highly unstable and the survival of dunes depends on the ability of plants to maintain ground cover and on the constancy of sand supply. Tidal fall exposes the beach to drying and wind action but the bulk of the sand comes from driest, uppermost part of the beach, above the high water mark.

Landward of the active fore-dunes lies the first dune ridge. Older ridges become lower and flatter as fresh sand supplies are usually trapped in the younger dunes and sand is removed from the older dunes to fill the valleys between dune ridges. Older dune systems give way inland to links, where a heavily-grazed turf is developed on stabilised sand sheets. These links have a long history of erosion in rising seas and the recycling of sand may allow the development of new dune systems at adjacent sites. Where dune faces have been eroded, the complexity of dune history may be laid bare, with buried organic layers marking periods of stability, vegetation cover and soil formation and cross-bedded sands representing periods of dune migration.

In Orkney, most beach sand is rich in shell and even when sea salts are removed by rain the sand retains a high pH. Active dune systems are present at Dingieshowe, Aikerness, Scapa, Stronsay and Sanday among others. Dune sands have begun to accumulate on the Churchill Barriers. Along the western seaboard, the Birsay Links, Skaill Bay and Warebeth Beach, the dune ridge systems are less obvious. These subdued dunes and links may relate to sand movement and dune formation from a beach front that lay much further west than today. The links at Skaill show dune sands that overlie fresh water loch peat deposits dated at 6580 ± 80 yrs. A site at Tofts Ness, Sanday was settled from the Neolithic period but was then abandoned in the late Neolithic/early Bronze Age for approximately 1000 years before being resettled in the late Bronze Age and then permanently abandoned in the Iron Age. Sand layers lying above the late Neolithic soils have been dated by OSL to about 4000 BP. The increase in dune-building activity in Orkney may correlate with the Hekla 4 and 3 eruptions in Iceland (Sommerville, et al., 2001).