The single most important factor determining cliff form on the hard rock coasts of Orkney is the structure of the rock – the way that the rocks are lying and the orientation and number of fractures. The effects can be seen in both plan view – on the map and from above – and in cross section – moving from sea level to the cliff top.

The simplest structure is that of horizontally-dipping sedimentary rocks. Here the detail of the cliff face is controlled by differential weathering and erosion of the rock beds and produces a series of ledges, notches and caves. 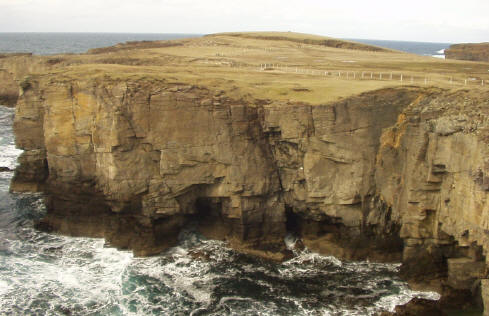 Since both sandstones and flagstones are also extensively cracked and faulted, often in rectangular patterns, the detail of the cliff forms are dominated by blocky shapes, and cut by inlets (geos) and ravines which often bisect headlands. This contributes to the development of an exceptionally rich heritage of caves, arches and stacks. The coast of west Hoy has the finest assemblage in Europe of Old Red Sandstone cliffs (Hansom, 199x).

Where dip or foliation lies to seaward then the cliff face is inherently unstable. Removal or collapse of rock towards the cliff base leads to rock slides. Recent rock slides can often be recognised at the base of these cliffs and the lack of rounding of debris suggest that it is soon removed by the sea. 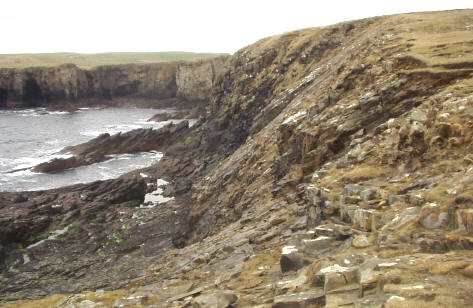 In plan view, the outline of the coast often shows headlands and geos. The geos can usually be traced to lines of weakness provided by trap dykes, faults and master joints. The headlands, as well as showing relatively low fracture densities, often relate to resistant rocks

The detailed cross-sectional form of cliffs is a product of rock structure. Many cliffs drop into deep water and this precludes effective abrasion of the cliff base. The cliff face may be tens or even hundreds of metres high but can be divided into a number of zones according to the influence of waves and spray. At the base is the submerged zone, hidden from view. Close to sea level lies a zone of inundation which is exposed to the air only between waves. Above this lies a wave impact zone, which is pounded by waves under higher sea states. The highest marine influence is in the spray and wash zone, where water from breaking waves shoots upwards as droplets or sheets. All four zones vary in height according to the sea state. Only during conditions of low tide and low swell can the inundation zone be observed easily and at these times wave and spray action will be confined to the lowest parts of the cliff. Under high sea states, where deep water waves up to 15 m high can approach the shore, wave action reaches heights of 25 m on some cliffs, wash strips vegetation and loose debris and spray and air borne debris is carried many tens of metres inland. Rock fragments and granules thrown by the wind may create a depositional zone on cliff tops, a form of machair in which progressive soil thickening incorporates clasts from cobble size downwards.