Definition: steep to vertical or overhanging rock slope at the coast, free of soil and regolith

Around 20% of the Orkney coastline has cliffs more than 15 m high. Marine action plays a dual role in cliff formation. The obvious role is in cliff erosion, undercutting the slope base and thereby forming debris both directly and indirectly due to mass failure of the over-lying rock. The hidden process is the removal of debris by a variety of marine processes including long shore drift.

Cliff formation and erosion traditionally been related to the formation of a notch at the base of the cliff. The development of the cliff notch through time is important as it controls both the rate of cliff recession and the form of the shore platform left behind. Water-line notches and caves occur at numerous localities on Orkney but also at higher levels on the cliff, reflecting the considerable reach of wave action above sea level on these high energy coasts. Long stretches of rock coast also lack notches, indicating that cliff retreat and shore platform development is not controlled primarily by notch excavation and cliff collapse.

Experiments have shown that breaking waves are much more effective than broken waves at notch cutting. When cliffs plunge into deep water, as on western Hoy, waves are reflected and very little other erosion takes place. When waves break some distance offshore, owing to a low beach or shore platform angle, erosion occurs slowly. Cliffs whose base has a relatively narrow steep beach are more likely to experience the maximum erosive forces of breaking waves. The narrow shore platforms that fringe the cliffs of west Hoy may thus promote rapid erosion.

The continued erosion of the coastal slope and the subsequent removal of the debris by near shore currents cause the shoreline to retreat to form a sub-horizontal wave cut or shore platform. In Orkney, the coastal wave cut shore platforms show a relatively steep aspect ending in deep water. This is related to the general rising sea level over the past six millennia. 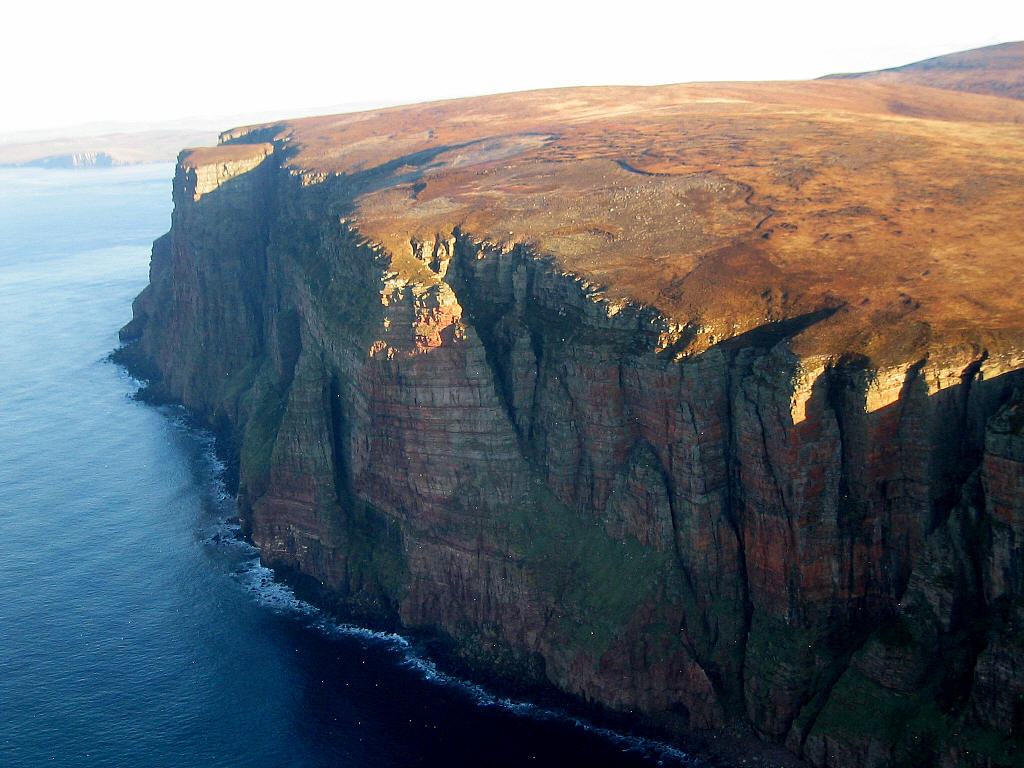 Cliffs of Hoy by Alan Moar 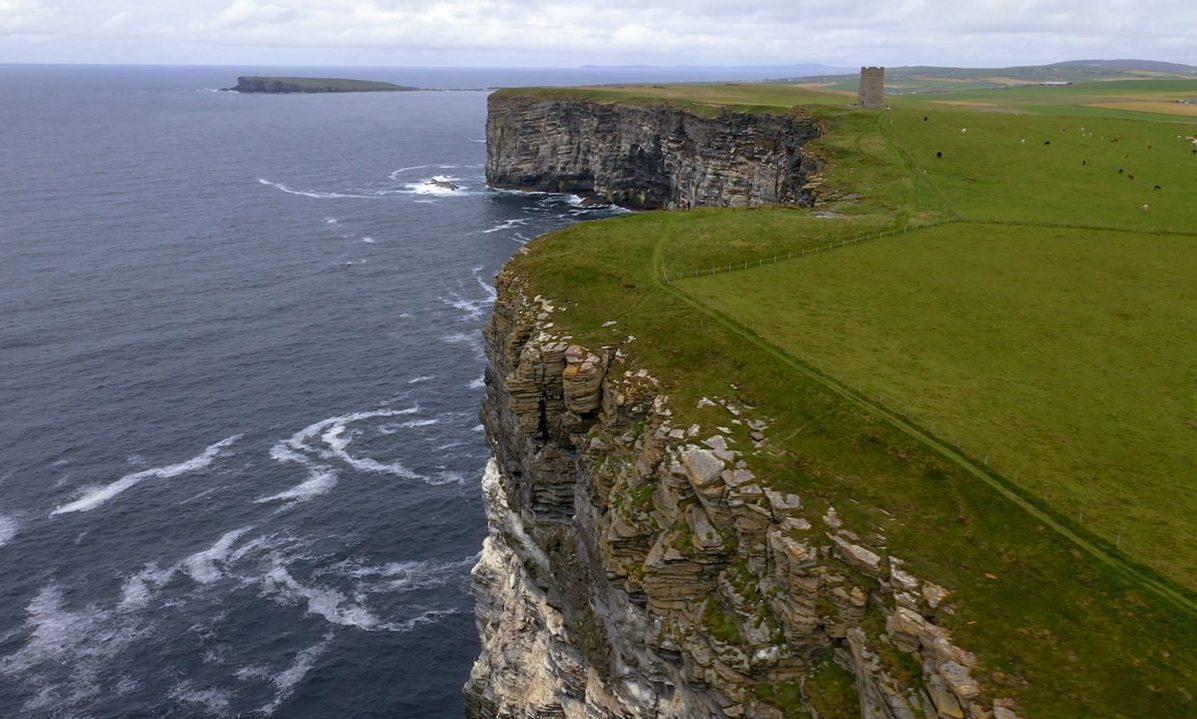 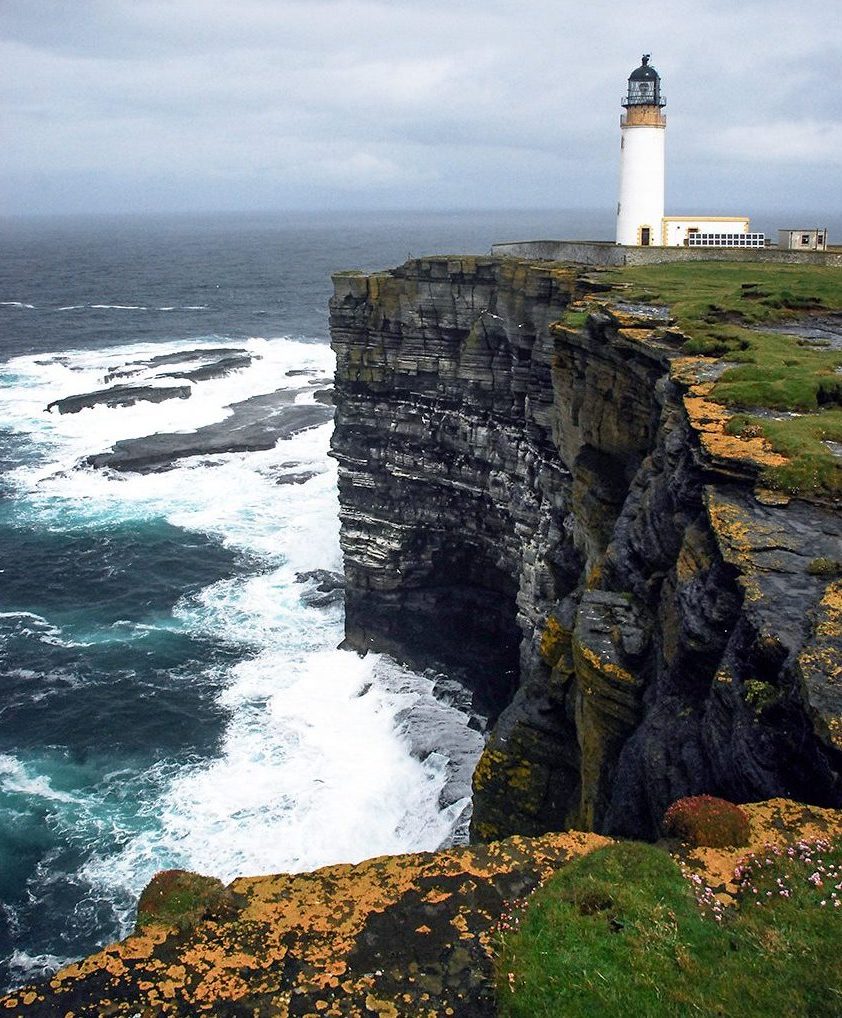 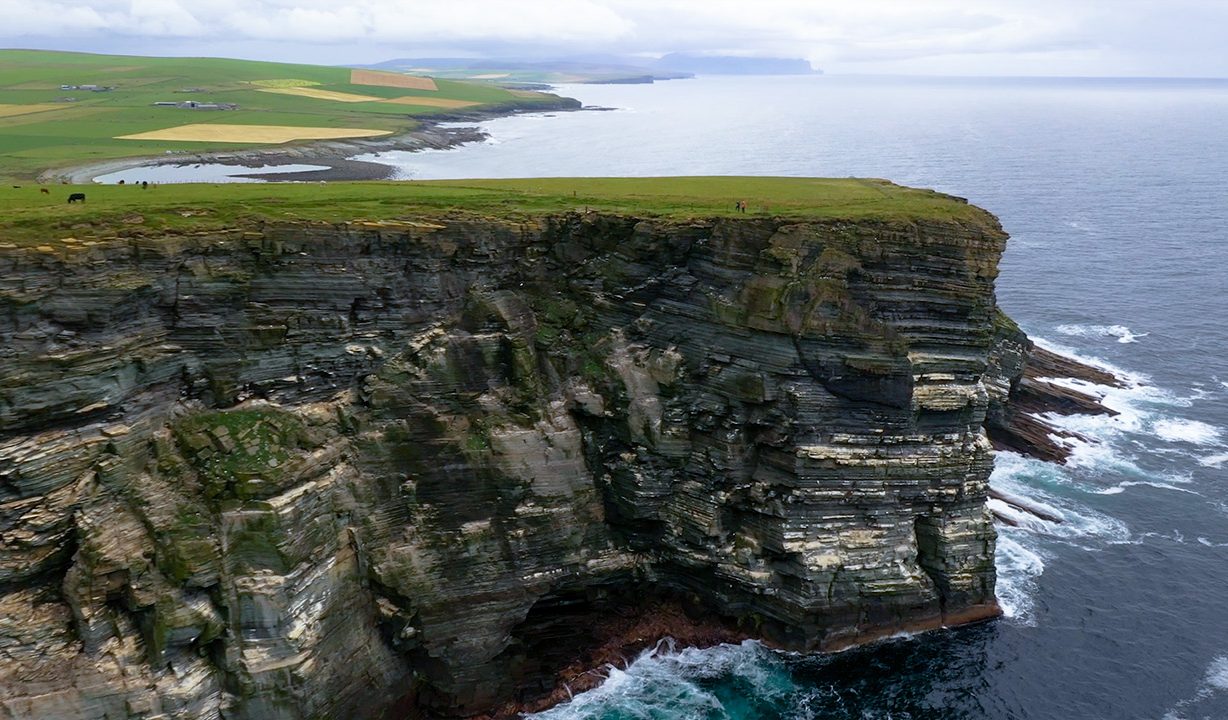 Lichen of the cliff face

Superimposed on this process of cliff erosion is the subsidiary process creating cliff morphologies. This gives, along the exposed coasts of Orkney, an endless succession of headlands, bays and geos, with caves, gloups or blowholes, arches and sea stacks in every stage of development and destruction. The process starts with wave-induced erosion of the rocks along fracture lines at the base of the cliff and initiates a small opening following the weakness.  Cave enlargement proceeds by hydraulic action of the waves enhanced by the pneumatic action of trapped air and the abrasive action of sand and pebbles. When long caves are formed, collapse of the roof at the inward end forms a gloup, while total collapse of the roof forms a geo.  Intersection of geos can leave isolated sea stacks and arches. The Old Man of Hoy is only one of many sea stacks and castles along the Orkney shoreline is the result of relatively recent erosion no more than 250 years old.

Although the process zones vary in height, the cliff ecosystem is adapted to cope with all but the most extreme sea states. The cliff face is blackened by the lichen (Verrucaria maura). The uppermost part of the cliff, affected by frequent spray and occasional wash, has a cover of yellow (Caloplaca marina) and grey (Lecanora sp) lichens on exposed rock surfaces, sea pinks in crevices and patches of turf where finer material has been stabilised.

Comparisons with old photographs and visits to kirkyards can help to tie down the timescales for the development of different kinds of lichen cover. This is useful for indicating the minimum residence or exposure time of a rock surface of a cliff or a block on a cliff top. Recent rock falls from cliffs are indicated by fresh scars which either lack lichen or which have only limited weathering and discoloration of the exposed rock.