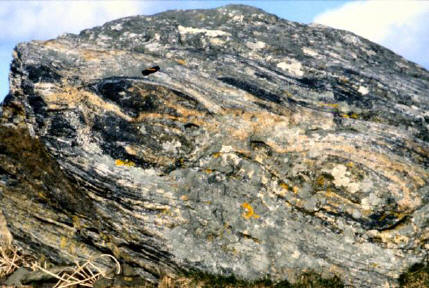 This large gneiss boulder is found on Sanday. It originally rested 200 m west of Saville but was then moved to near the farm of Scar. The Saville Boulder has a distinctive mineralogy dominated by oligoclase and penetrated by threads of actinolite and accompanied by hornblende. It bears affinities with Scandinavian gneisses (Peach and Horne, 1880; Wilson et al., 1935).  Although the presence of the boulder has been cited as evidence for Scandinavian ice reaching Orkney, only one other Scandinavian erratic is known on Orkney. It is possible that the boulder was ice-rafted from Norway into the North Sea and later entrained by Scottish ice and carried to Orkney. An alternatively source in Sutherland has been suggested (Rae, 1976).