Hot dry desert conditions prevailed with environmental cyclicity varying from dryer to wetter conditions on a 100,000yr Milankovitch  orbital eccentricity cycle of the Earth around the Sun. 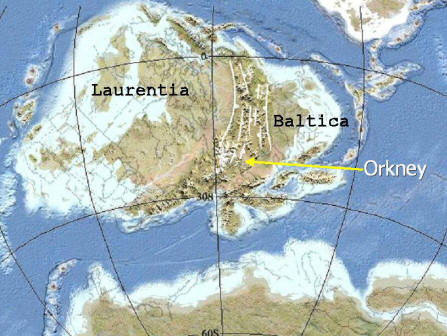 During the Devonian Period, North America and Northern Europe were joined together forming Euramerica, one of the three major continental masses on the Devonian globe, with Orkney placed south of the equator. Most of Britain formed part of this landmass with mountains in the northwest and the open marine Devonian Sea covering southwest England. Between the mountains and the sea was a vast desert plain with the lowest topographic levels occupied by a large shallow fresh water lake extending from Shetland, through Orkney, Caithness, the Moray coast and across to western Norway. This shallow lake is known as Lake Orcadie. Throughout its existence the lake was fed by numerous rivers flowing from the western mountains carrying sand and mud to fill the lake depression. 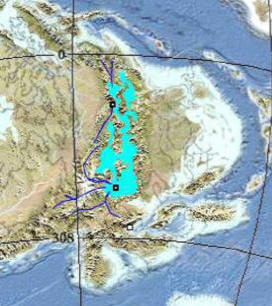 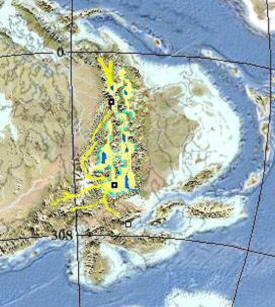 Evaporation in this tropical climate was high and rainfall seasonably variable, resulting in fluctuations in the lake depth and area covered by water giving rise to extensive lake margin mud flats which repeatedly were drowned and then dried out. Superimposed on this seasonal cycle of wet and dry periods was a much longer climatic periodicity, perhaps of the order of several tens of thousands of years, where the lake got steadily deeper and covered even larger areas lapping up to the edge of the western mountains and then rapidly retreating to begin this cycle again. 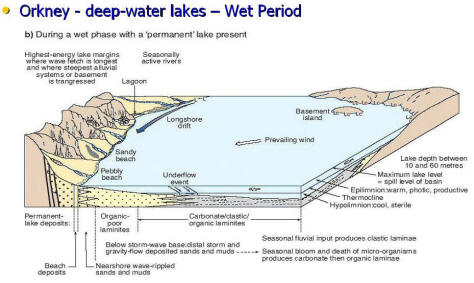 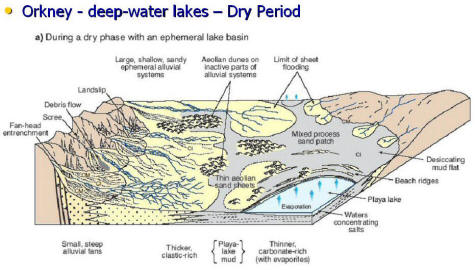 These cycles are easily observed in the well exposed coastal sections of West Mainland where the major cycles are between 5m – 20m thick. The cycle starts with a finely laminated dark grey to black muddy flagstone, with fossil fish fragments, representing periods of greatest water depth in Lake Orcadie  and ends with shallow water lake margin sediments consisting of sands, silts and light grey muds as tabulated below:

Sedimentology of the Lake Cycles

The fossil-bearing beds are included in cycles repeated about 110 times during the 10.5 million years depositional history of the Orcadian Lake. These cycles range from 5m to 20m in thickness and each has four phases:

Phase 1. Black finely laminated siltstone and mudstone generally 0.5m to 2m with a high carbonate and organic carbon content. Formed in deep waters, below the level where surface wave action disturbs the bottom sediments. The laminations, each one to two millimetres thick, consist of dark and light coloured bands that may be related to seasonal variations in biological activity in the lake. This bed commonly contains abundant fish remains and appears to have been formed when the lake was at its deepest.

Phase 2. Carbon-rich (bituminous) silty mudstone with thin, irregular laminae of siltstone and sandstone. These beds are characterized by Gypsum pseudomorphs and stromatolite (blue-green algae) forming sheets, mounds or orange-weathering limestone within the rock. These are signs that as the lake became shallower, bottom currents began to stir up the lake floor, and the influx of sediment increased.

Phase 3. The overlying beds in the cycle are lithologically similar to those of Phase 2, but are characterized by the presence of abundant sand-filled polygonal mudcracks. At this stage, the lake was so shallow that its bottom was periodically exposed as an extensive mudflat.

Phase 4. The uppermost beds in the cycle are usually ripple-laminated, fine-grained sandstones and siltstones with desiccation cracks. The sands were deposited by wide rivers flowing into a shallow lake and then reworked in a sand-flat environment, which occasionally dried out to form a desert floor. 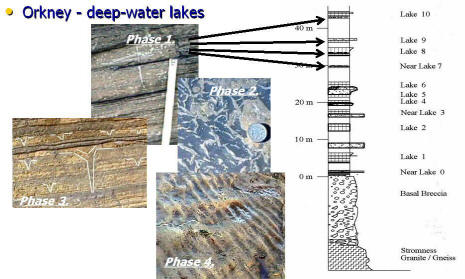 All four phases may not be represented in any one cycle, since fluctuating lake levels sometimes repeated particular stages. However, careful study of the rocks can distinguish these and enable geologists to correlate cycles over considerable distances.

Likewise the sequence of phases varies between positions within the basin ie lake margin or lake centre as in the diagram below. 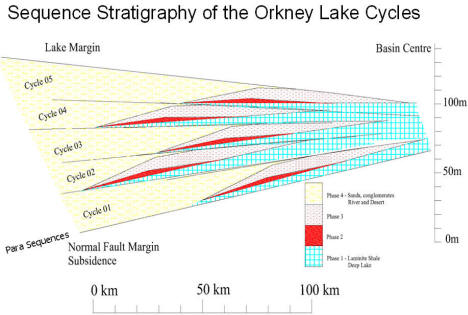 This cyclicity of lake deposition continued for much of the Middle Devonian until Upper Middle Devonian and Upper Devonian times when the Lake Orcadie waters retreated so far that it was broken up into many small separate lakes in a predominantly desert landscape. This dry period is characterised by sandstone deposits derived from the large braided river channel deposits which continued to flow from the Western Mountains and the sand dunes which migrated across the desert plains. Two intervals on increased rainfall during this period saw the advance of the lake once again covering over the desert floor but these advances were short-lived and perhaps did not cover the same area as the original Lake Orcadie.

Donovan (1980), and others afterwards, proposed a similar scheme for the same cycles as found in Caithness. Obviously the same divisions are recognised and are only described in slightly different terms.