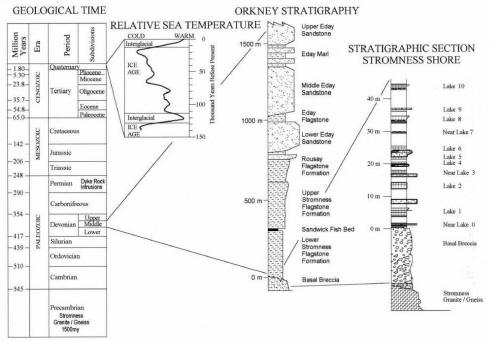 The original investigations into the sedimentary rocks of Orkney and Caithness by Roderick Murchison (1859) led to a simple three-fold classification of the Old Red Sandstone into:

This early interpretation was modified when angular unconformity was recognized between the sands and conglomerates at Yesnaby and the overlying flagstones, and between the flagstones and sandstones in north Hoy. This appeared to fit the tectonic picture from other parts of Scotland and led to their classification into Lower, Middle and Upper Devonian epochs.

Since no unconformity existed between the Eday sandstones and the Middle Old Red Sandstone flagstones, the Eday Sands were initially assigned to a Mid-Devonian age and thus deemed older than the Hoy sandstones, which were given a late Devonian date. This stratigraphic interpretation was adopted by Peach and Horne (1880) and is  used in many  publications.

However, detailed stratigraphic sections, sedimentology and palaeogeographic reconstructions of the sandstones in the South Isles have shown that the Eday Group sandstones are equivalent to the Hoy Group (Astin, T pers comm).

Recognition of contemporaneous fault movements on the North Scapa and Bring Fault systems and volcanic eruption at the base of both the Eday and Hoy sandstones further enhances this correlation.

The North Hoy Unconformity is now considered a local rather than a regional feature.