Definition: An erratic is a boulder transported and deposited by a glacier having a lithology different than the bedrock on which it rests. Erratics are useful indicators of patterns of former ice flow.

The colour of the tills on Orkney is largely a reflection of the rocks over which the ice had passed. The red marls and sandstones of the Eday Group give a distinctive red till and erratic clasts of red sandstone are a major component of these tills in the eastern parts of Westray, Rousay and West Mainland. Tills also contain a lesser component of far-travelled material, including exotic stones. On Orkney the most important and abundant erratic material is shelly mud excavated by ice moving across what is now the end of the North Sea. This mixed and ground debris forms the matrix for widespread shelly tills. Many records exist of erratic clasts in tills, with the Memoir mentioning granite, felsite, gneiss, quartzite and schist, all probably derived from the Scottish mainland. Various Mesozoic fossil-bearing boulders and cobbles have been recorded, most notably chalk and chalk flints.

The most famous erratic is the Saville Boulder, first described in 1870, of possible Scandinavian origin. An exciting recent find is a rhomb porphyry from the Oslo region – found by David Leather on Rapness in Westray. It is pictured opposite, together with a rather striking gneiss clast. 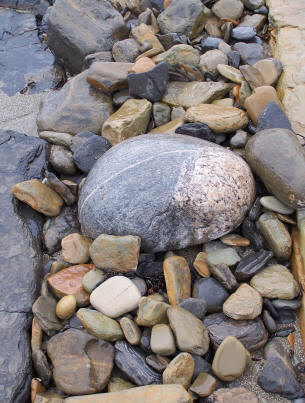 An erratic carried by glacier ice from the basement rocks of Graemsay. It now lies amongst locally-derived sandstone and volcanic clasts on the beach at The Flashes, Hoy. 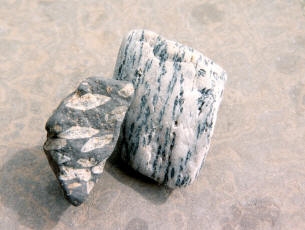 Erratics of rhomb porphyry and gneiss from boulder clay, Stancro