Westray is the furthest northwest of the Orkney islands. The total area is 47 square kilometres, not huge but the irregular shape gives it a long coastline of almost 80 kilometres, a good place to look for glacial striations. The bedrock of the whole of the island is made up of the cyclical Rousay Flagstone Formation.

The most recent ice advance, and the only one that has left any evidence, was during the Late Devensian, when ice started to accumulate about 30,000 years ago. By about 24ka it was at its peak and the large ice sheets, which had built up in Scandinavia and Scotland and were at their greatest extent, came together in the North Sea and flowed over Orkney. By 15ka, as the Gulf Stream started up, a rapid retreat of the ice led to the emergence of Orkney. At the peak of the ice advance, a layer of orange-red boulder clay was deposited on Westray – mostly in the east and south. Moving ice had picked up shells and rock from what is now the sea bed, together with large boulders of red and yellow sandstone as it rode over Eday. Occasional erratics of crystalline rock as well as flint are also embedded in the glacial till. 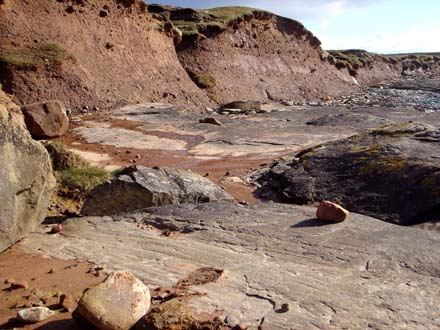 Looking north from Ward Hill across Graemsay and Mainland 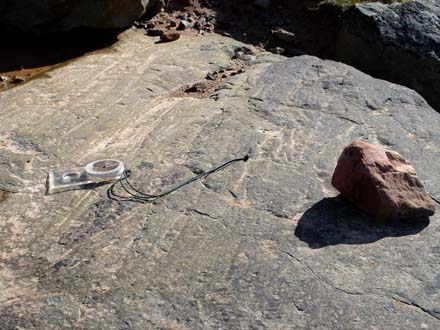 Measurement of glacial striae made in 2006

The movement of ice left scratches and grooves on flat rock surfaces, and thereby important evidence indicating from which direction the ice came. The direction of ice movement was recorded and mapped by Peach and Horne as long ago as 1880, and again by Wilson in 1935. Some of the striations have weathered away since Peach and Horne were working in Orkney. Three historical sites, no longer visible, include one at about 100m elevation on the side of Fitty Hill, another at Noup Head and one on the nearby cliffs at Gentleman’s Cave. However, new ones are being revealed all the time as erosion of the boulder clay along the coast takes place.

The accompanying map shows glacial striae plotted from measurements made in 2006. Until then there were only ten sites on the geological map of Westray. This has been increased to 24. An average was taken for each site which may have had one or two, or half a dozen or so scratches and grooves that could be used for measurement. Extreme examples were discarded. Most of the striations and grooves appear on smoothed rock surfaces, many of which are newly exposed along the coast from beneath the existing cover of glacial till. When looking out for striations it is best to go for flat-lying, hard and durable beds of sandstone. These tend to outcrop on a point or minor headland, emphasising their resistance to erosion. The edges of dipping beds are no good and you can pass by those strata that crumble or are friable beneath the boulder clay. Using an ordinary compass the striations can be measured in degrees from magnetic North in the direction the ice was going, so northwest would be read as 270°. It is possible to achieve an accuracy within a degree or so. The measurement is then converted to Grid North by deducting the current magnetic variation – i.e. 4° in 2006 in Orkney. 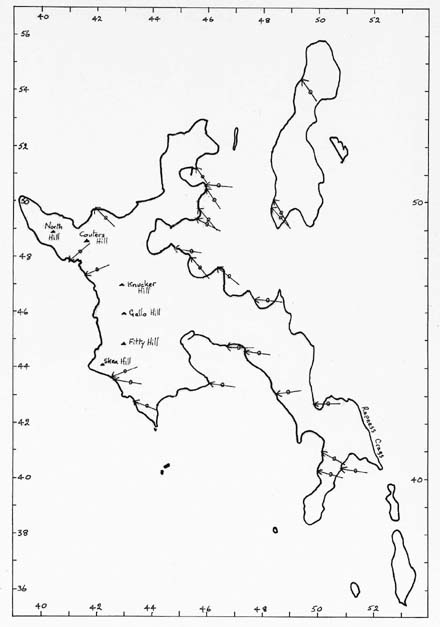 The striae show a mainly westerly trend. From a glance at the map it appears that the cliffs of Rapness and the western hills had an effect on the ice stream which must have opened around such obstacles and closed again round them. It should be remembered that the scratches made by the ice are for the most part the last before the ice melted. As the scratches were made, the moving ice was in its death throes and literally grinding to a halt. One site in the northeast of Westray included two trends on the same rock surface, an example of crossing striae. On another site I found one sharply curved groove and often slightly diverging scratches on the same bedrock. They can’t tell you everything about the ice movements but form a base to work on.

The exception to the westerly trend is in the northeast of the island and also on Papa Westray where the trend is to the northwest. This fits in with the rest of Orkney, which shows a change in the direction of flow from SE-NW to E-W. In a simplified conclusion, it would appear that an ice stream from Scotland was superseded by a final push from the Scandinavian ice sheet. But reality is not all that simple. 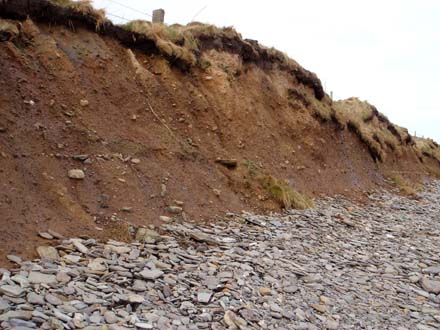 Boulder clay covers much of Westray and is thickest in the east and south. It is easy to recognise as it is such an intense orange-red. The colour is due to the rock debris that was picked up by the ice as it passed across Eday, where there are thick beds of bright red marls and sandstones. One of the most impressive red till cliffs is that opposite Rapness pier and visible to all who arrive by boat. The steeply sloping cliff is patterned by many parallel gullies produced by rain erosion.

On the east shore in the Bay of Swartmill there are two deposits of boulder clay on top of each other, separated by a layer of cobbles and pebbles. The lower till has striations below it with a westerly trend. The colour and content of each till is much the same and there is no soil profile or even a sign of any break between the two beds. The line of cobbles half way up the cliff is long and level, and continues for 80m or more before disappearing in the pebbly beach. It is suggested that this is an example of a glacial boulder pavement, a layer of cobbles and slabs deposited beneath the ice and over which clay till moved, wearing the surface smooth and flat.

Erratics in the boulder clay

The presence of erratics adds to the evidence of where the ice was coming from. On the shore near Russland Farm, Rapness (the most southerly arrow on the map) I found an erratic of rhomb porphyry actually in situ in the boulder clay. This is a rock type that outcrops in Norway but nowhere in Britain, indicating a Norwegian origin. The same rhomb porphyry erratic pebbles can be found in boulder clay on the Yorkshire shoreline where Scandinavian ice ended up against the coastal cliffs.

The red and yellow sandstone pebbles and boulders found on Westray shores are also erratics, as they are ‘foreign’ to the island’s flagstones; they are incomers from Eday. Red sandstone does not outcrop as a rock type on Westray, but on some shores, for example on the pebbly Rack Wick bay near Castle o’ Burrian, they are so numerous and some so big, that one might be excused for thinking that it must outcrop on Westray. 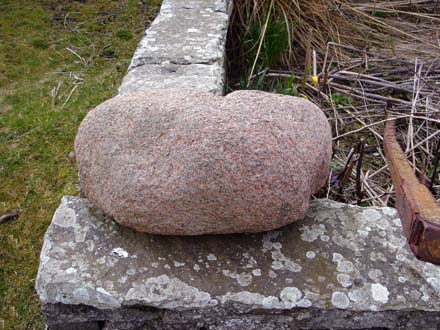 Shells have been found in the boulder clay in Eday, Shapinsay and Stronsay. Some shells pushed up from the sea bed have been useful in dating the clay deposit. Westray, being further from the source, tends to have only very small unidentifiable fragments. Some of the most striking erratics are the lumps of flint and pebbles of chalk that you might rarely find on a pebbly shore. The flint nodules, which originally occur as knobbly lumps within the chalk, strongly suggest the presence of an outcrop of Chalk under the sea not far away. The nearest outcrop is in the Moray Firth to about 25km east of Wick. The Chalk is of Cretaceous age, about 100 million years old. Some good flint nodules have been found on Papay.

Occasional erratics of crystalline rocks of granite, gabbro, quartzite or gneiss have turned up on Westray, both as pebbles and as larger rounded boulders, and may well have originated from either Scandinavia or Scotland. The geographical origin of some erratics can be ascertained in the laboratory, many granites for example, while others such as rhomb porphyry or laurvikite are easily recognisable.

A major dilemma about where the ice came from is that one ice stream can transport rocks, which might be picked up later by another. Even when you have checked the geography of your erratic, a Scandinavian rock may have been carried part way across the North Sea then later picked up by Scottish ice. The same can be said about Scottish rocks pushed up from the seabed by an ice stream from Norway. 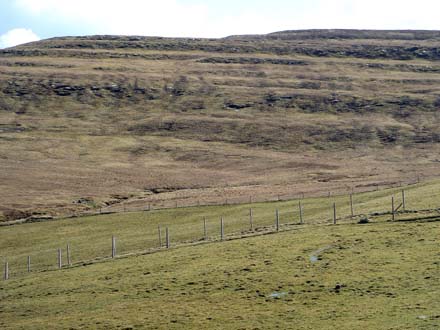 The effect of ice on the landscape

Much of the landscape of Orkney was already shaped before the Ice Age but the passage of the ice had the effect of smoothing it, eroding rocky eminences and gouging out hollows that filled, for example, as freshwater lochs. On the Western hills there is no boulder clay and only very thin soils. The sides of Fitty Hill (above) have been scoured by the ice and the stepped outline of the hill has been emphasised – each step representing one of the sedimentary cycles of the flagstone.

Around much of the coast of western Scotland, there are raised beaches – evidence that the land has risen following the melting of the ice sheet. The sea level also rose, but the land rose faster than the general rise in sea level. But Orkney had no ice sheet of its own and therefore was not under the pressure of a great weight of ice, but in recent times, rather than emerging, the land has been submerged by the post glacial rise in sea level. This is shown by peat, which accumulated in peat bogs a few thousand years ago, now occurring on the shore below the high-water mark. So Westray has a drowned coastline.

A drowned coastline is also apparent in the shape of the Orkney Islands. Original valleys and inlets are now flooded, leaving the very irregular coastline and archipelago of the present day. The shallow depth of the sea between the islands suggests that at the end of the last glaciation there may have only been two main islands. Early peoples were able to walk between Westray and Papay and other islands, though it is likely that the deep Westray Channel still separated the Northern Isles from Orkney Mainland and the isles to the south.

Another effect of the rise in sea level may be the presence of aeolianite or cemented dune sand, common worldwide but not often seen in the UK. Former sand dunes of mainly shell sand, built up over the last few thousand years, have turned into hard rough sandstone. As sea level rose the dune sand was invaded by the water table. The resulting rock is a coarse sandstone. The best outcrop of aeolianite is along the shore of Mae Sand where the orange coloured rock lies on boulder clay, topped by dune sand and lyme grass. At the north end of Mae Sand where the track reaches the beach, there’s a thick outcrop, and further along on the right is an example of cemented pebbles with an infilling of sand to make a modern conglomerate, like some giant concrete. Another bed of aeolianite, pale grey in colour, lies midway along the Grobust shore. 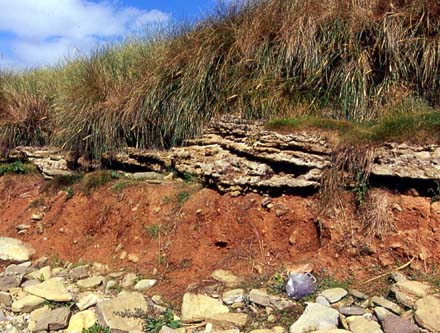