World coasts have seen sea-level variation of approximately 100 metres within the past 11,500 years through melting of the ice caps.  When the ice caps melt the sea level rises globally (eustatically).  The relative sea-level at any location is measured proportionate to the nearby land, which is itself subject to tectonic movement both up and down.

During the Ice Age, there was over 1 km of ice over central Scotland. On melting the downward pressure was released and the land surface moved up (isostatic rebound) quicker than the eustatic sea level rose.  This gives the appearance of a relative sea-level drop over much of Scotland during the Holocene.

In Orkney, where the ice thickness was little more than 500 m at most, eustatic sea-level rise was greater than isostatic rebound giving a local appearance of sea levels rising. This is responsible for the archipelago’s present drowned topography.

Where the relative sea level is rising, evidence of submerged coastal features consist of drowned river valleys, submerged dunes, remnants of forests and peat layers below sea level (noted in Scapa Flow) and notches with benches in the submarine topography. In Orkney waters, a well-defined notch is seen between 40m and 50m with a less well-defined notch at about 10m.  Both of these features may relate to pauses during the early Holocene sea level rise but equally may have formed at anytime during the last Ice Age.

Coastal landforms develop towards equilibrium with their environment. When a major change in sea level occurs, old coastal landforms are completely abandoned and a new set initiated.  After about 6000 – 7000 years ago when sea-level rise slowed down, coastal deposition probably managed to keep pace with sea-level rise so that migration of coastal features could take place, producing local transgressions and regressions of the shoreline intimately associated with the vertical changes of relative sea-level.

Significant fluctuations in sea level have the occurred around Orkney in the recent past. This is inferred from features observed near Stromness and many other parts of Orkney. There is compelling evidence from widespread raised beach features for an approximately 1m – 2m higher relative sea-level in the past, while the large number of oyces backed by grass-covered cliffs, and raised beaches around Orkney’s coastline confirm a similar story. Although not dated, it is inferred that this particular high stand occurred about 1000 years ago in the Viking Period.  It is postulated that as sea level dropped ayres grew across the mouths of small bays enclosing the oyce and developing the new equilibrium coast line. This relationship between raised beach, ayre and oyce is well demonstrated at Rothiesholm Head on Stronsay.

The “fossil forests” and submerged peat reported below the sand to the east of the Inner Holm, Stromness, from Otterswick, Sanday and from the Sands of Wright, South Ronaldsay, probably date from the Mesolithic. The Sanday woodland dates from 6500 yr BP. Approximately 4m in altitude separate this feature from the raised beaches indicating an average rate of rise in relative sea level of at least 10cm/100 years between 3000 BC and 1000 AD. A subsequent drop of about 2m with a return to the present level followed.

A raised beach deposit at about 7m in the cliff face near Muckle Head, north Hoy, is covered by glacial till.  This is evidence of higher relative sea level during one of the interstadial episodes of the last Ice Age and not part of the current phase.  Since approximately equal volumes of ice forms and subsequent depression of sea level occurs during glaciations over many hundreds of millennia it will not be an unusual coincidence to have ancient sea-level features that are at about the same level as today. The covers of tills at the rear of some inter-tidal rock platforms, for example, implies that these forms predate the last glacial maximum. 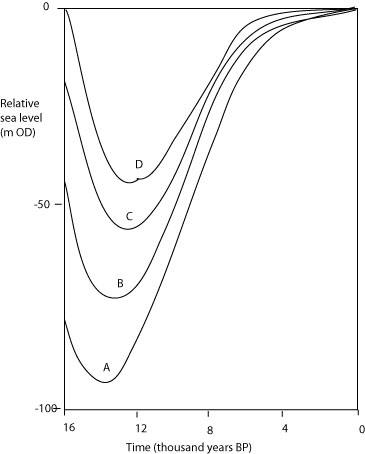