The present interglacial has seen many environmental changes. Temperatures have remained close to present levels but other elements of the Orkney climate – rainfall, windiness and storminess – have varied in ways that we are only beginning to appreciate against the backdrop of global warming. Sea level has risen and it is only over the last few thousand years that it has reached close to present levels. Orkney has experienced extreme natural events – tsunami, storms, coastal floods and ash falls from major Icelandic eruptions – but the impact of these on the landscape has been minor when compared with the arrival of man around 7000 years ago. 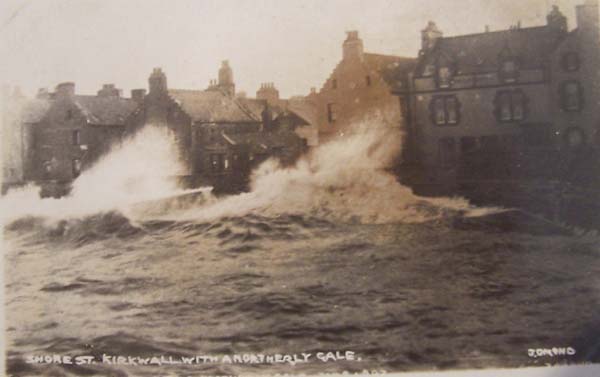 The Holocene Interglacial started 11,500 years ago with the final retreat of the polar ice caps and rapid global warming.  Evidence from southern Greenland ice cores suggests that a 7 ˚C warming may have taken less than 50 years.

The major change to the landscape of Scotland at the beginning of the Holocene was the establishment of a forest cover.  Once established, extensive open forest woodland consisting of hazel, birch and willow with a more restricted distribution of alder in the West Mainland continued until 5600 BP. During the Mesolithic, the Orcadian landscape may have been a mixture of thick forest in the lower regions with open woodland, grassland and heath on the hillsides.  The scarcity of Mesolithic archaeological sites may relate to this distribution of tree cover with communities established in clearings at the edge of the forest, along the seashore and on the hillsides.

Post Mesolithic sea level rising would have inundated many of the coastline settlements, leaving only the hillside sites for modern archaeology to discover beneath the blanket peat now covering these areas.  The abundance of wood at this time means that they would have made all their tools and buildings from this perishable material.  Fossil wood of this period is observed at low spring tides in sheltered bays within Scapa Flow and elsewhere as the “submerged forest” peat deposits.

Peat bogs persisted in Orkney from the early Holocene.  Nevertheless, by the middle of the Bronze Age (1500 BC), the pollen record shows a dominance of heather species indicative of a landscape of heath and blanket peat bog although there was perhaps still double the present tree cover.

The environment and climate of the late Holocene contained warm periods such as the “Roman period” from 300 BC to 400 AD, the medieval “Little Optimum” (750 AD to 1300 AD) and the current warm period that started in 1850 AD; temperatures were one to two degrees more than those of today.  In the Orkney context, the “Little Optimum” contained the Viking period and likewise the Picts flourished in Orkney during the earlier warm period. The last cold period (1300 AD to 1850 AD) known as the “Little Ice Age” reached its peak between 1650 AD and 1750 AD.

During the Holocene vegetative cover, human occupation and climate appear to be interrelated. Climate exerts a strong control on the range and extent of colonisation by human farming groups. The viability of such settlement requires a stable or improving climate.  Deterioration in climate may lower crop yields in southern communities, while at the same time marginal areas may suffer famine, disease and population migration. Where the marginal area is an island such as Orkney, worsening climate could lead directly to population loss and leave behind an impoverished culture. This may have happened several times in Orcadian prehistory. The current phase of rapid climate change is sure to bring further changes to Orkney landscapes.