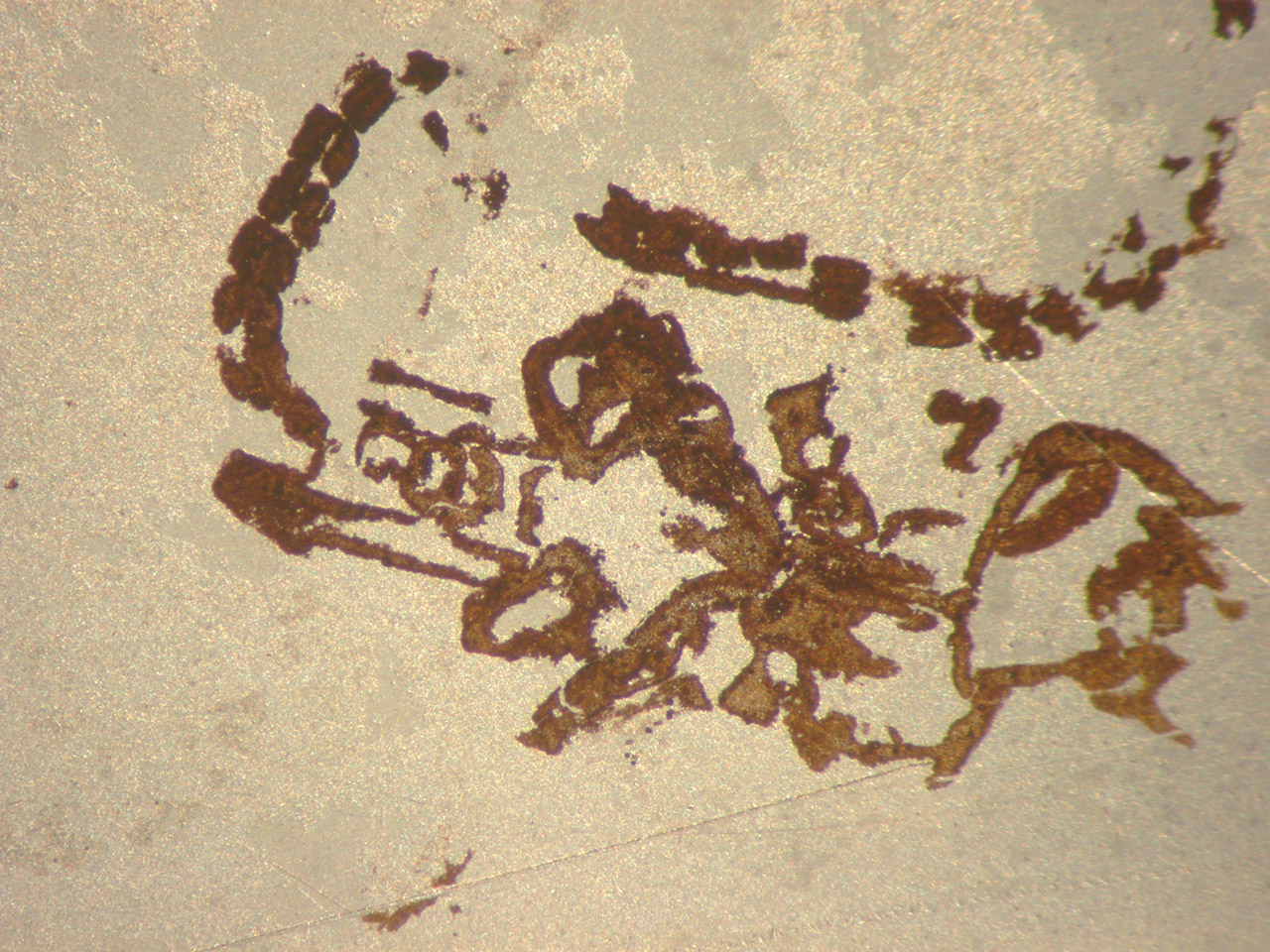 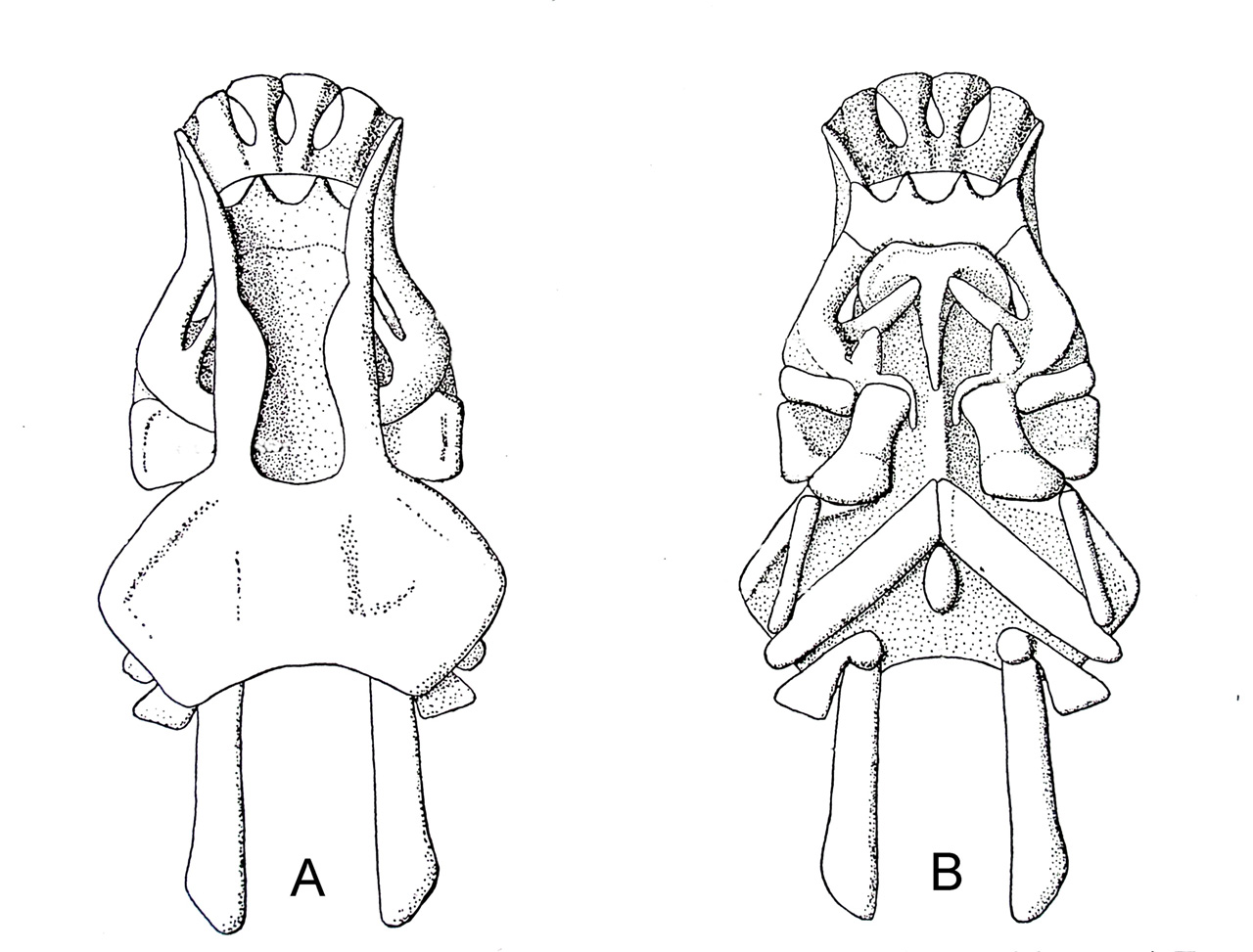 There is an impressive list of papers on this species and many theories are postulated about what group this species should belong to.

In one of the more recent papers (Thomson et al. 2003) Palaeospondylus is described as a larval dipnoan (Dipterus). 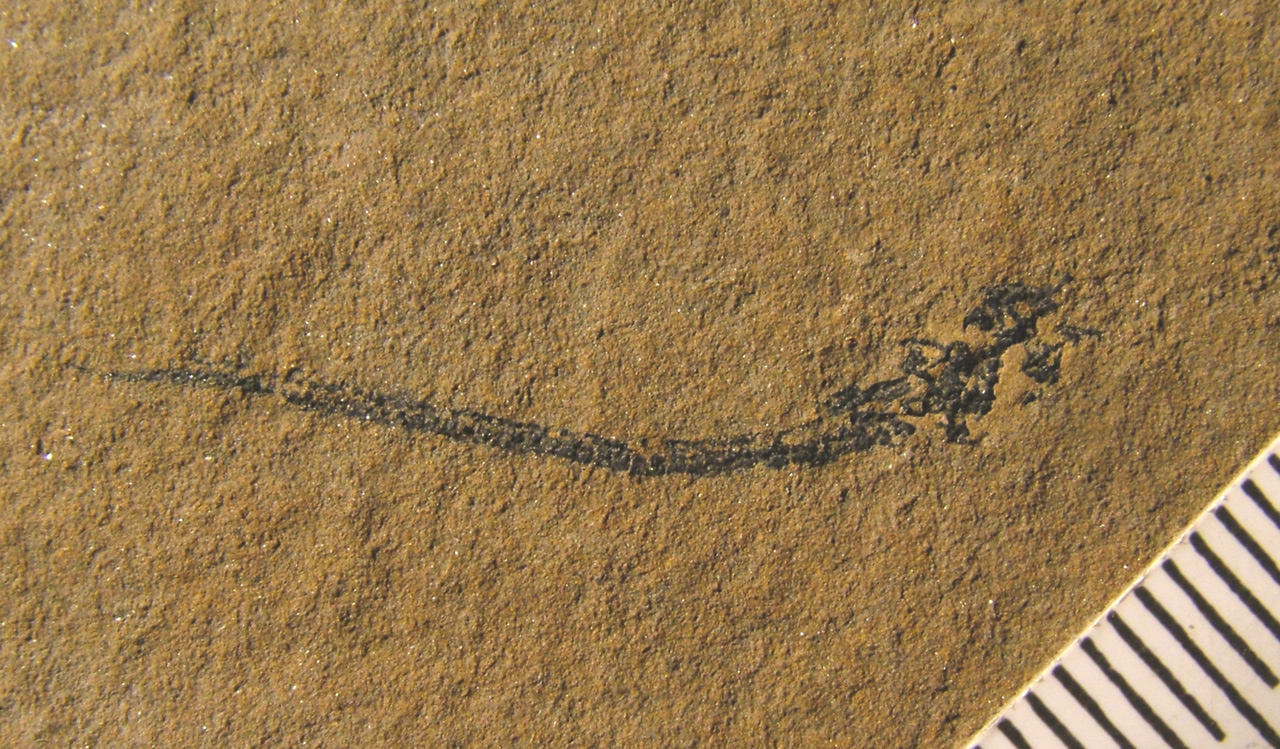 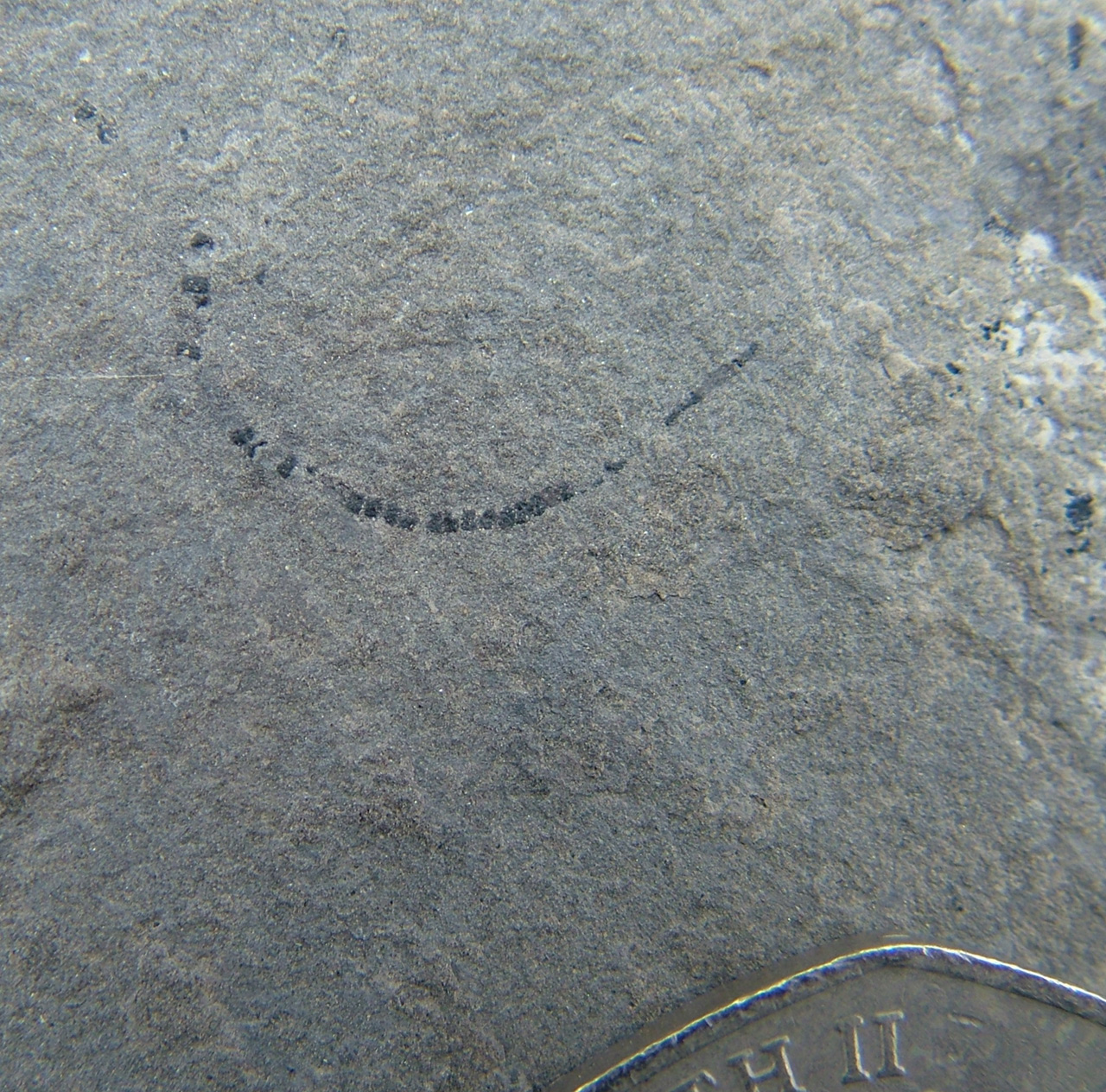 Complete specimen, with a vague head from the Sandwick Fish Bed (collection F.V.C.). 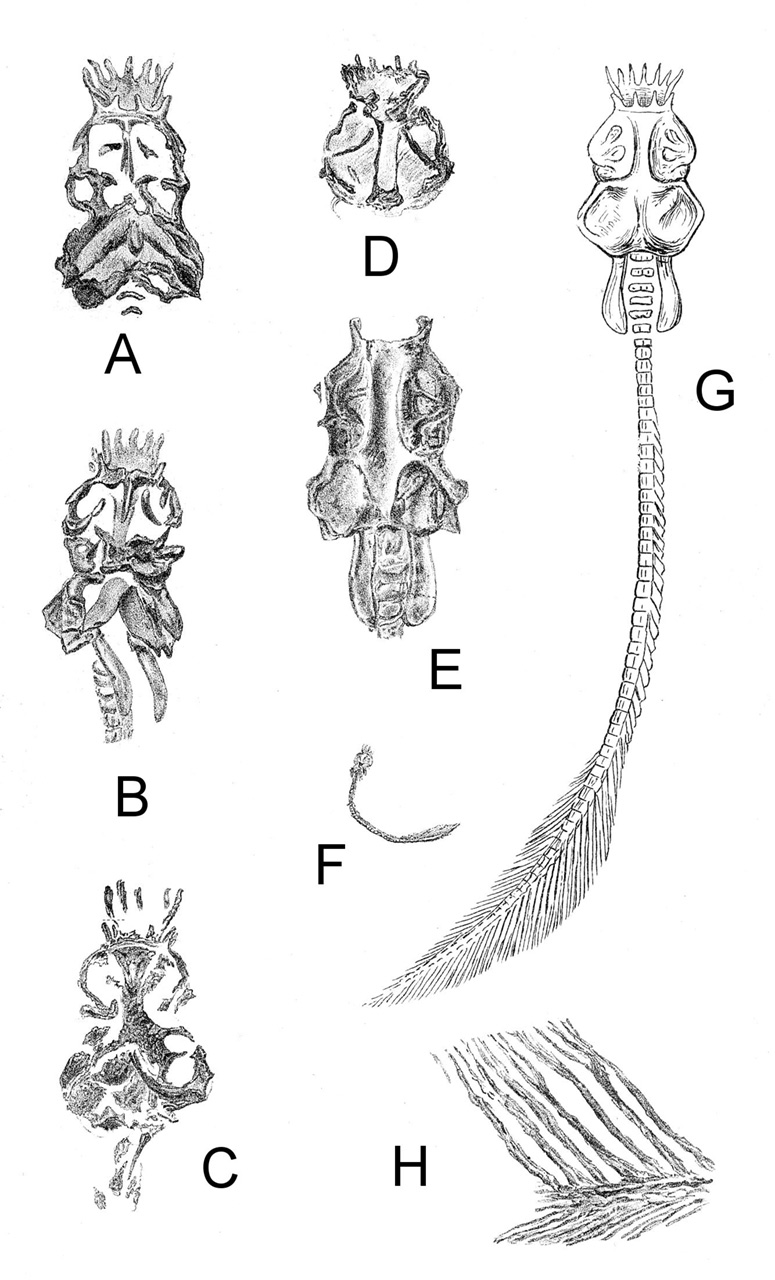 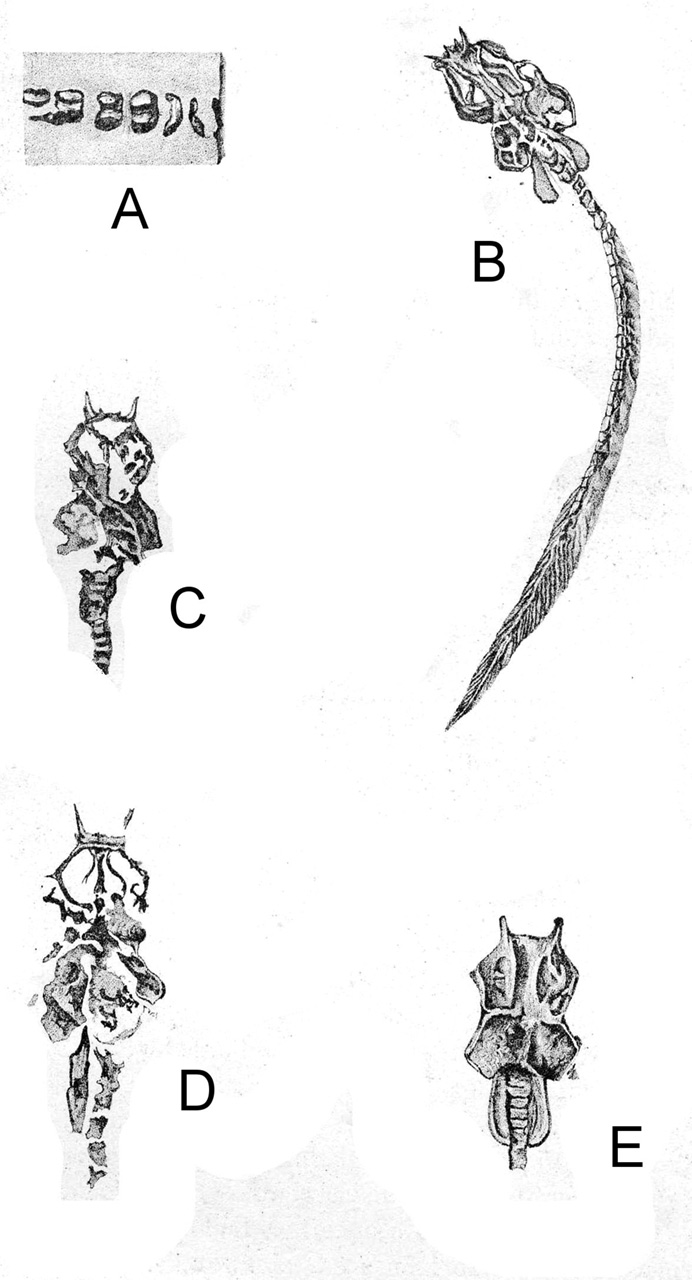 Palaeospondylus: to be or not to be a larval lungfish?

In this part of the web page on Palaeospondylus we will try to answer some of the riddles concerning this tiny, but very interesting creature. 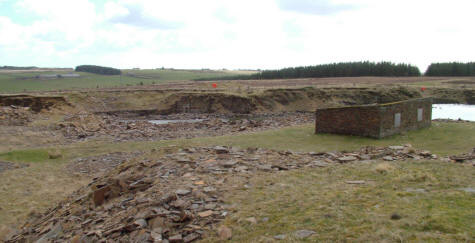 Achanarras Quarry was opened in about 1870 and by the late 19th century many specimens of this small fish (5 to 60mm) had been collected by two amateur collectors, the cousins Marcus and John Gunn. Ramsey Traquair named the fish in 1890, after the cousins Gunn. Traquair was not absolutely sure which order of fishes the species belonged in and it has puzzled paleontologists ever since.

It would take too much space on this page to mention all the theories postulated about where in the animal kingdom Palaeospondylus resided. They are many, though the fishes and amphibians were the majority!

The small slate quarry of Achanarras, known for its fossil fish, was not the only locality where Palaeospondylus was found. A locality on the east coast of Scotland near Niandt [either spelling is ok – with a t at the end or not, but pick one for the whole page as this is not medieval times] also yielded a large number of specimens. Both localities have a similar fauna and so are considered stratigraphically the same horizon. Through correspondence with various parties it was also known by the authors that Palaeospondylus was also collected from the Sandwick Fish Bed in Orkney. Only when one of the authors had seen an actual specimen and had collected one in situ from the Sandwick Fish Bed, was it taken for granted that the fish also occurred there. The Sandwick Fish Bed and the Achanarras quarry are stratigraphically equivalent (Trewin, 1986).

After reading the paper we had a quick look in our collections of Middle Devonian fish we collected during the many years of fieldwork in Scotland. We found in the collections several small specimens of Dipterus in the same size range of the largest specimens of Palaeospondylus. These small (juvenile) lungfish looked just like a smaller version of the adult ones. This would seem to cast doubt on Palaeospondylus being a juvenile Dipterus. See the pictures below! 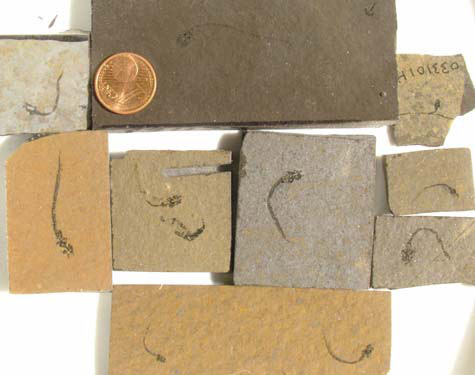 Several specimens of Palaeospondylus showing some of the size range. (picture taken of specimens submerged in water. Coin is 16 mm in diameter). 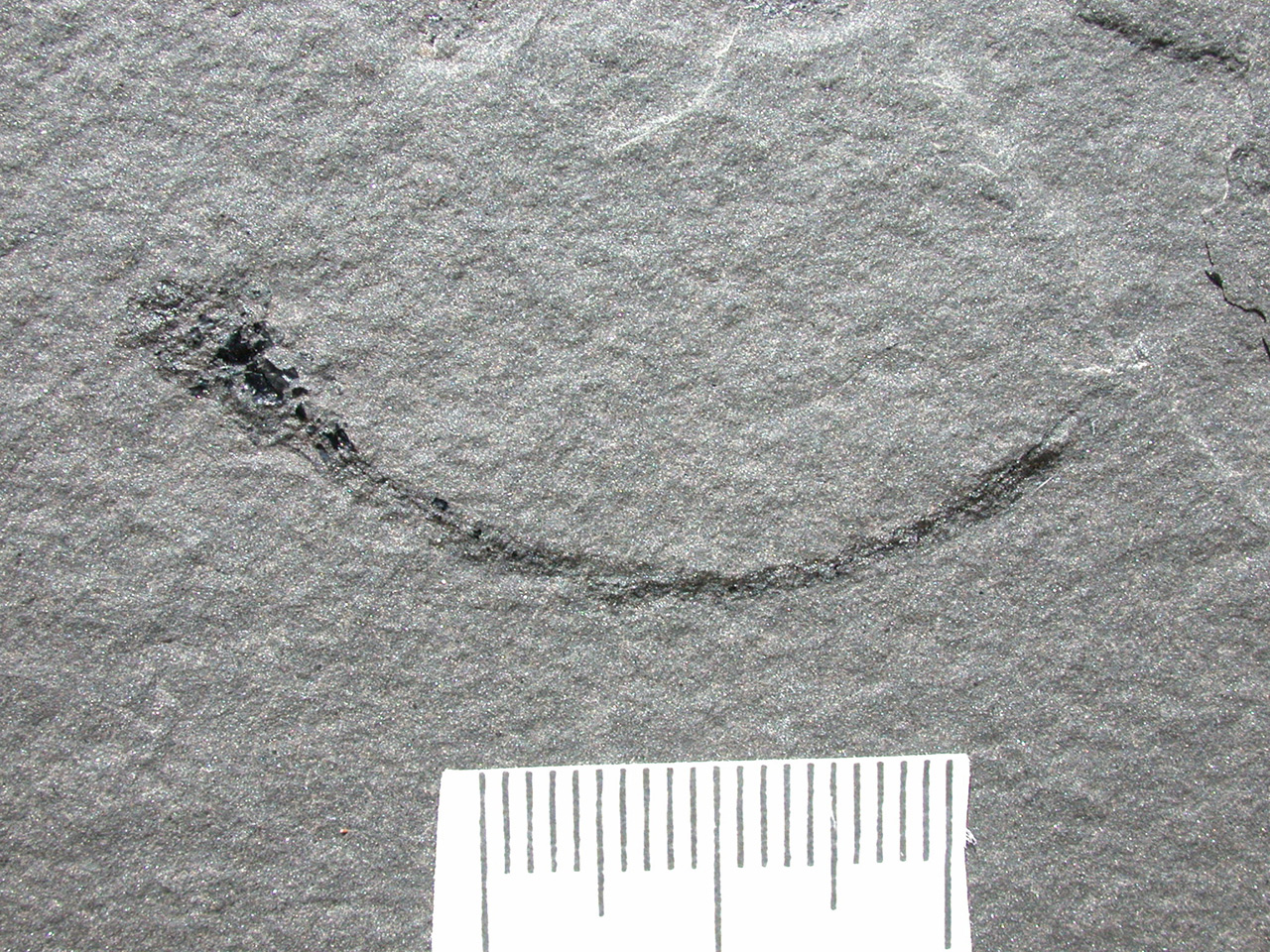 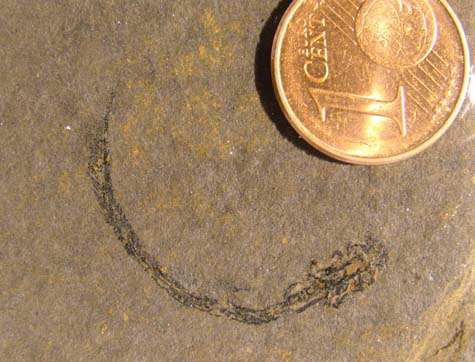 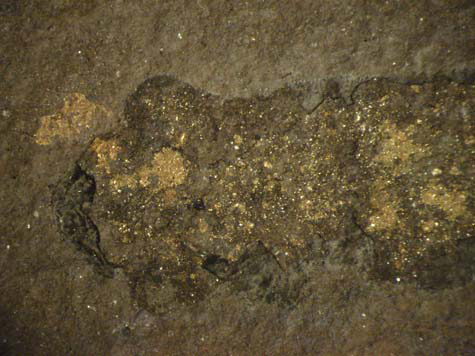 Close up of above specimen, head with toothplates, see also below (Collection NMS ©). 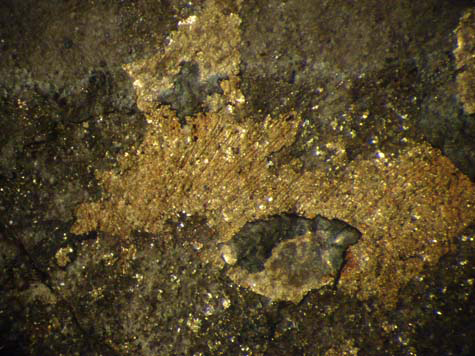 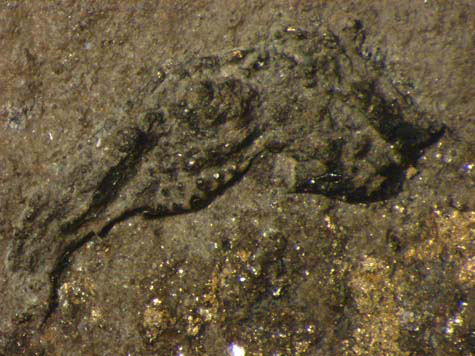 Close up of above toothplates visible.

While we were preparing this extension of the information on Palaeospondylus on the original website another important paper on the subject was published:

In the text below we will try to summarize what Palaeospondylus is not and what it may be.

Having read the paper by Joss and Johanson (2006), it was clear that other people had the same doubts about Palaeospondylus being a larval lungfish.

Two of the main objections to Palaeospondylus being a lungfish of Joss and Johanson (2006) are quoted below:

Page 2. “…P. gunni lacks teeth or any form of dentition, juvenile dentitions have been identified in all other lungfish where juvenile stages are known, such as the Devonian “toothplated” forms Andreyevichthys…”.

Page 2. “Moreover, of the many hundreds of preserved specimens of P. gunni there is a complete absence of transitional stages that would be expected in a metamorphosing animal (e.g., tadpoles stages in which a tail is still present along with newly developing limbs)”.

Reasons for Palaeospondylus not being a larval lungfish (Dipterus) other than the above.

1- Complete specimens of Dipterus smaller than the 6 cm (mentioned by Thomson et al. (2003) as the higher end range of Palaeospondylus) are known showing normal Dipterus morphology.

2- Many localities above the Achanarras/Sandwick fish bed horizon have well preserved Dipterus, but Palaeospondylus has never been found above this horizon.

3- Many specimens of the lungfish Pentlandia (also smaller than 6 cm) have been collected in sediments favoring fossilization of even the most delicate structures, but Palaeospondylus or similar looking larval “lungfish” have never been found.

4- Adults normally always have a more ossified (bony) skeleton than juveniles. Dipterus does not show a well-ossified vertebral column with cylindrical centra as seen in Palaeospondylus. Jarvik (1952) did show a couple of Dipterus specimens with what appeared to be well-ossified cylindrical centra and the authors have some specimens like this also. However, both Schultze (1975) and Ahlberg and Trewin (1995) describe more informative specimens that show that the centra are not well ossified. In fact, Ahlberg and Trewin (1995) suggest that Jarvik’s (1952) well-developed cylindrical centra were in fact carbonized notochordal material.

5- Palaeospondylus with a length range of 15 mm to 60 mm has a very long range for a larval stage.

6-The tail morphology does not resemble that of Dipterus at all.

7-K. S. W. Campbell (pers. comm.) stated that no lungfish, whether extant or fossil has an attachment (or suctorial) structure at the front.

To which group does Palaeospondylus belong?

Is Palaeospondylus a shark?

Pretty unlikely as sharks are unknown in the Orcadian Basin. Also, sharks have cartilaginous skeletons, unlike Palaeospondylus, which is bony. There are some morphological similarities that can be pointed out depending on the interpretations of certain structures, but they are not really similar to one another. Palaeospondylus is not a shark.

Is Palaeospondylus an acanthodian?

Is Palaeospondylus an amphibian?

This was a suggestion made by Erik Jarvik a number of years ago based on the similarities of Palaeospondylus to juvenile amphibians. As amphibians (tetrapods) did not evolve until the late Givetian or Upper Devonian in a fairly well understood chain of events, so it is most unlikely as Achanarras is at the lower Eifelian horizon. Also, morphologically they are very different. Palaeospondylus we think is not an amphibian. 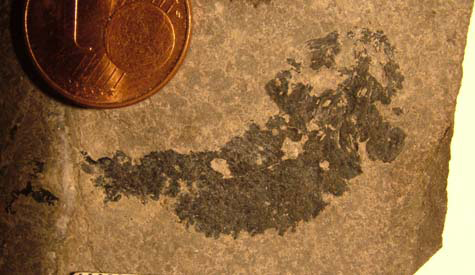 Is Palaeospondylus an actinopterygian?

This has gained favour recently because of the similarity between Palaeospondylus and a specimen figured by Pearson and Westoll (1979) of Cheirolepis, the actinopterygian found at the Achanarras/Sandwick horizon. The figured specimen of Cheirolepis lacks scales and fins and is much larger than Palaeospondylus but does superficially look similar. However, small specimens of Cheirolepis are not known from the Orcadian Basin and so there are no intermediates between Palaeospondylus and Cheirolepis. Also, Cheirolepis is fairly rare at Achanarras, but is more common in Orkney (Sandwick) where Palaeospondylus is rare and in the Moray Firth area where Palaeospondylus is unknown. Palaeospondylus is a pretty robust (because it is heavily ossified) little fish and should be preserved in the Moray Firth area. Also, if one looks closely at the Pearson and Westoll (1979) specimen you begin to see that the superficial similarities are what they seem to be, i.e., superficial. The specimen is in fact not well preserved at all, but it is clear that the vertebral column lacks ossified cylindrical centra, a fact recognised by Lehman (1947) in a closely related species, Cheirolepis canadensis (this is also the case in most Devonian actinopterygians). As stated before, a fish is very unlikely to become less ossified as it becomes an adult. It is also unlikely that Palaeospondylus is a small adult actinopterygian as it lacks the characters usually associated with these fishes, such as scales, fins, teeth, etc.

Is Palaeospondylus a jawless fish?

We will spend a little time on this, as this was one of the favoured explanations of Palaeospondlus’s classification. Until recently (Newman (2002) and Trewin and Newman (2001)) jawless fish were unknown at the Achanarras/Sandwick horizon. The jawless fish found in Achanarras (Achanarella and Cornovichthys) are both unossified and so Palaeospondylus is not likely to be a juvenile form of one of these types of fishes, and anyway, one of them (Achanarella) is known in the size range of Palaeospondylus. Traquair and others have favoured Palaeospondylus being a jawless fish based on the lack of observable jaws and paired fins. However, Moy-Thomas (1940) and Forey and Gardiner (1981) demonstrated that Palaeospondylus did have jaws. Also, Moy-Thomas (1940) described delicate paired structures posterior to the head which he interpreted as supports for pectoral fins. Specimens of Palaeospondylus are known that appear to show the body outline and no paired fins can be seen. However, the fin supports are so delicate that the fins themselves must have been insubstantial things. If they were held against the body with rigor mortis, they would have been practically impossible to see. Another thing against Palaeospondylus being a jawless fish (apart from it having jaws!) is the well-ossified vertebral column. Whilst some jawless fish, such as Trewinia magnifica (Janvier and Newman, 2005) (from above the Achanarras/Sandwick horizon), have well ossified dermal elements (head plates, scales, etc.) they do not appear to have had a well-developed ossified post-cranial skeleton. We feel confident for the reasons outlined above that Palaeospondylus is not a jawless fish.

Is Palaeospondylus a placoderm?

This was the favoured option of Moy-Thomas (1940) who did the most research on Palaeospondylus. There are three groups of placoderms in the Orcadian Basin, being the 1: antiarchs, 2: arthrodires and 3: ptyctodonts.

1: Is Palaeospondylus an antiarch?

Pterichthyodes is the antiarch from the Achanarras/Sandwick horizon. Palaeospondylus cannot be a juvenile of this fish as Trewin (1986) describes specimens within the size range of Palaeospondylus as smaller versions of the adults. Palaeospondylus is unlikely to be a small adult antiarch as it has nothing in common with this group.

Is Palaeospondylus in another group within the placoderms?

This was Moy-Thomas’s (1940) favoured option. He compared many features in the cranium and postcranial skeleton with the placoderms and found many similarities. The big problem is the lack of armour in Palaeospondylus. Moy-Thomas (1940) suggested that Palaeospondylus might be related to weakly armoured forms such as Gemuendina (which are considered primitive), but placed Palaeospondylus in its own order within the Placodermi. However, Palaeospondylus is such a small fish it can be swallowed whole by practically every species of predator in the Orcadian Basin. No amount of armour would help it in this situation and it would be a positive hindrance to survival in reducing mobility. In the author’s opinion, it is more likely that evolutionary pressures caused Palaeospondylus to lose the armour to allow greater mobility (probably in sideways whip-like motions) to escape much larger predators. If this is the case, then Palaeospondylus could have evolved from any of the placoderm orders, presumably ones with well-developed cylindrical centra (coccosteids?).

For more recent information see the references below, the last paper suggesting tetrapod affinities. I suppose this won’t be the last paper on the species.