Definition: all material between fresh bedrock and the ground surface, including weathered bedrock, deposits and soil.

Although bedrock reaches the surface along much of the coast, in most parts of Orkney it is covered by variable depths of regolith. Apart from covers of till and dune sand, the regolith is composed largely of weathered bedrock. Evidence of intense frost-shattering and associated cryoturbation is found at a number of sites. The condition of prehistoric stone monuments indicates that frost-shattering is of limited effectiveness today and the frost weathering may relate to the cold conditions which prevailed during the Lateglacial. Chemical weathering associated with soil development has also generated a metre or more of regolith, particularly on calciferous sandstones and flagstones which are susceptible to decalcification. Deep chemical weathering is not widespread, a reflection of the effectiveness of glacial erosion on the islands. 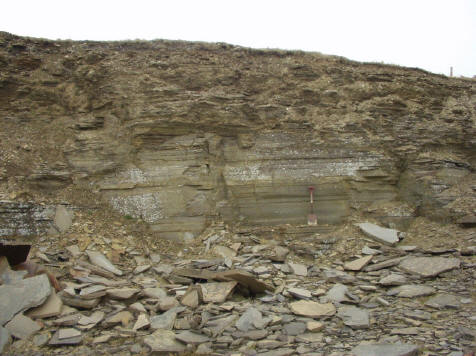 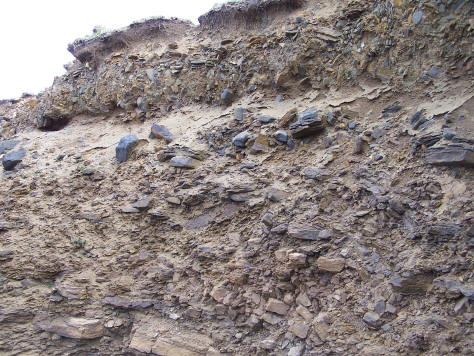 Rip-block till resting on flags and covered by a thin layer of head and soil. The head is a periglacial deposit reworked by frost-shattering and cryoturbation form the underlying till. Birsay.