Significance: Ward Hill provides examples of a range of active and fossil periglacial landforms. As the highest point on Orkney it also provides evidence of the thickness of the last ice sheet

Ward Hill (479 m) is noted for its landforms associated with wind activity and also displays a range of frost-related features which provide a record of slope activity and soil movements both at the present day and earlier during the Holocene. Four main types of periglacial feature were described by Goodier and Ball (1975): turf-banked terraces, wind stripes, hill dunes and composite stripe/terrace features. Deflation surfaces are also well-developed (Gordon and Sutherland, 1996). 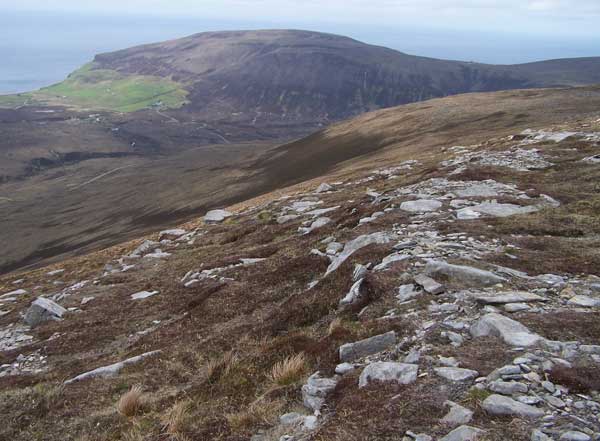 Turf-banked solifluction terrace on the southern flank of Ward Hill

The turf-banked terraces have typical dimensions of 2-3 m across the treads, with slopes of about 15°, and the risers have widths of 3-5 m and slopes of 25-35°.  The treads are vegetation-free, and the long-axes of the terraces are either parallel to the contours or aligned obliquely across the slope. 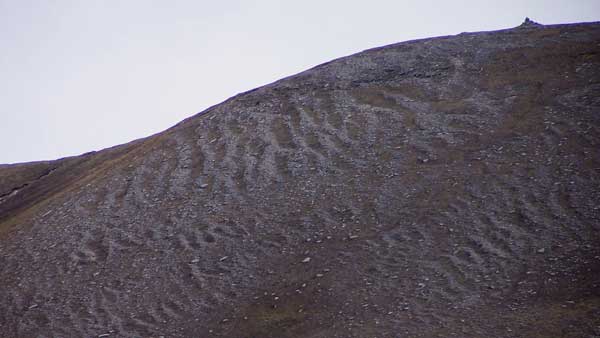 Wind stripes are strikingly developed on Ward Hill. Goodier and Ball (1975) distinguished three separate types.  The first comprises regular, continuous stripes in which the vegetated parts are generally straight-sided and parallel; the second, regular continuous stripes with non-uniform widths and curving margins; and the third, scattered crescent-shaped vegetated areas on deflation surfaces.  The first type occurs on the exposed southern face of the hill, and here the stripe alignment is generally parallel to the contours.  The vegetated stripes in this area are from 0.2 to 1.7 m wide and the inter-stripe zones are 0.52-0.78 m wide.  The wind-cut stripe faces average 0.14 m in height.  These regular features merge along-slope with wind-formed vegetation waves where vegetation cover is complete, but elongate zones of growing Calluna vulgaris  alternate with zones of dead Calluna  stems and lichens (see Bayfield, 1984).  From a study of similar features in the Cairngorms, Bayfield (1984) considered two possibilities for the origin of wind stripes:  erosion of a previously intact vegetation cover or plant invasion of bare ground.  He favoured the latter hypothesis and suggested that selective colonisation occurred on the lee sides of wind-formed sand ripples or dunes. 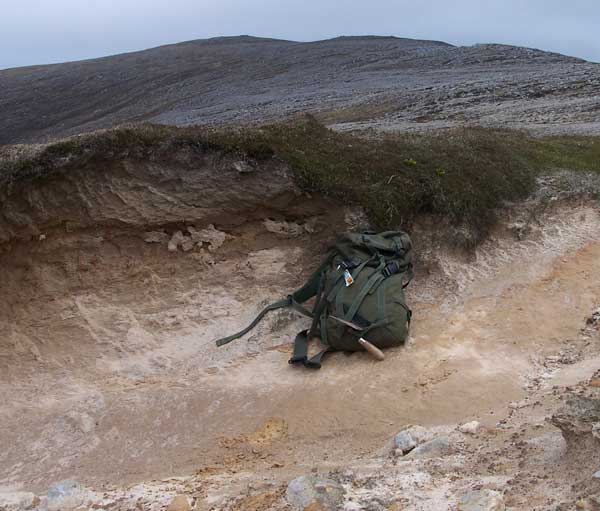 The features termed hill dunes by Goodier and Ball (1975) consist of areas in which eroded sand-sheets capped by vegetation stand as remnants above deflation surfaces.  The name is therefore somewhat misleading, as the ‘dunes’ are not constructional features.  The sands have a distinct stratification: a surface horizon of about 0.1 m of grey sand overlies a yellowish-brown sand to a depth of 0.7 m, with a buried surface horizon between 0.7 m and 0.84 m, a second bed of brown sand to 0.94 m and then a further buried surface horizon at 0.9-0.95 m, with underlying sand to 1.2 m.  Below the sands is a diamicton consisting of weathered sandstone clasts with an iron-stained exterior in a sandy clay matrix.  This material also armours the deflation surfaces.  The stratification of the sand deposits is indicative of alternating periods of stability and sand movement, but no studies have been carried out on the age of the deposits.  Similar sand-sheets and interbedded soil horizons have been described on Ronas Hill, Shetland (Ball and Goodier, 1974), and on An Teallach (Ballantyne and Whittington, 1987).  At the latter locality it was demonstrated that sand deposition began in the early Holocene but was much reduced by the establishment of vegetation cover during the Holocene.  However, recent disruption of the vegetation due either to climatic deterioration or to overgrazing has resulted in a renewed phase of sand erosion and re-deposition.  A similar history may apply to the Ward Hill sands.

Periglacial deposits occur on the summits of most Scottish mountains.  It is possible to divide these deposits into two broad age-groups: those formed during the cold phases of the Late Pleistocene and those formed under the milder conditions of the Holocene (Ballantyne, 1984, 1987).  The regolith that mantles the summits of the hills of northern Hoy was produced during the Late Devensian (and conceivably earlier), but the periglacial features described above were all apparently produced during the Holocene.

In northern Scotland the upper surface of the last ice sheet has been mapped by Ballantyne and others using the contrast between the ice-scoured lower slopes of the hills and the regolith-covered summits. Often a sharp line exists between the two zones – a trim line that marks the upper limit of the ice sheet against the hill. The summit can be inferred to have been a nunatak standing above the ice surface. 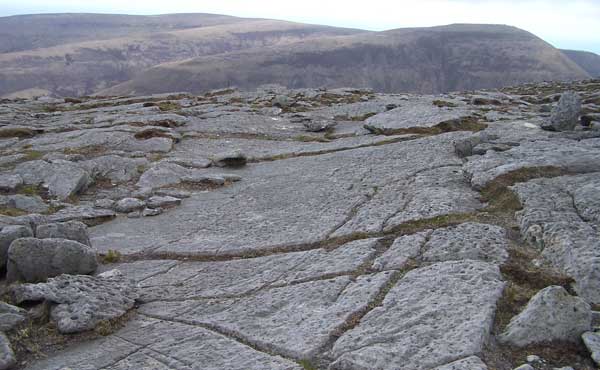 Ward Hill is the highest point of Orkney and provides critical evidence of the thickness of the last ice sheet over Orkney. At numerous points on the summit sandstone slabs are exposed which point to stripping of regolith by the last ice sheet. The depth of regolith nowhere matches that on sandstone nunataks like An Teallach. It appears therefore that the last ice sheet covered the hill summit. The ice may not have been very thick over the summit as there are few signs of vigorous ice moulding and weathered sandstone survives beneath lee slopes.