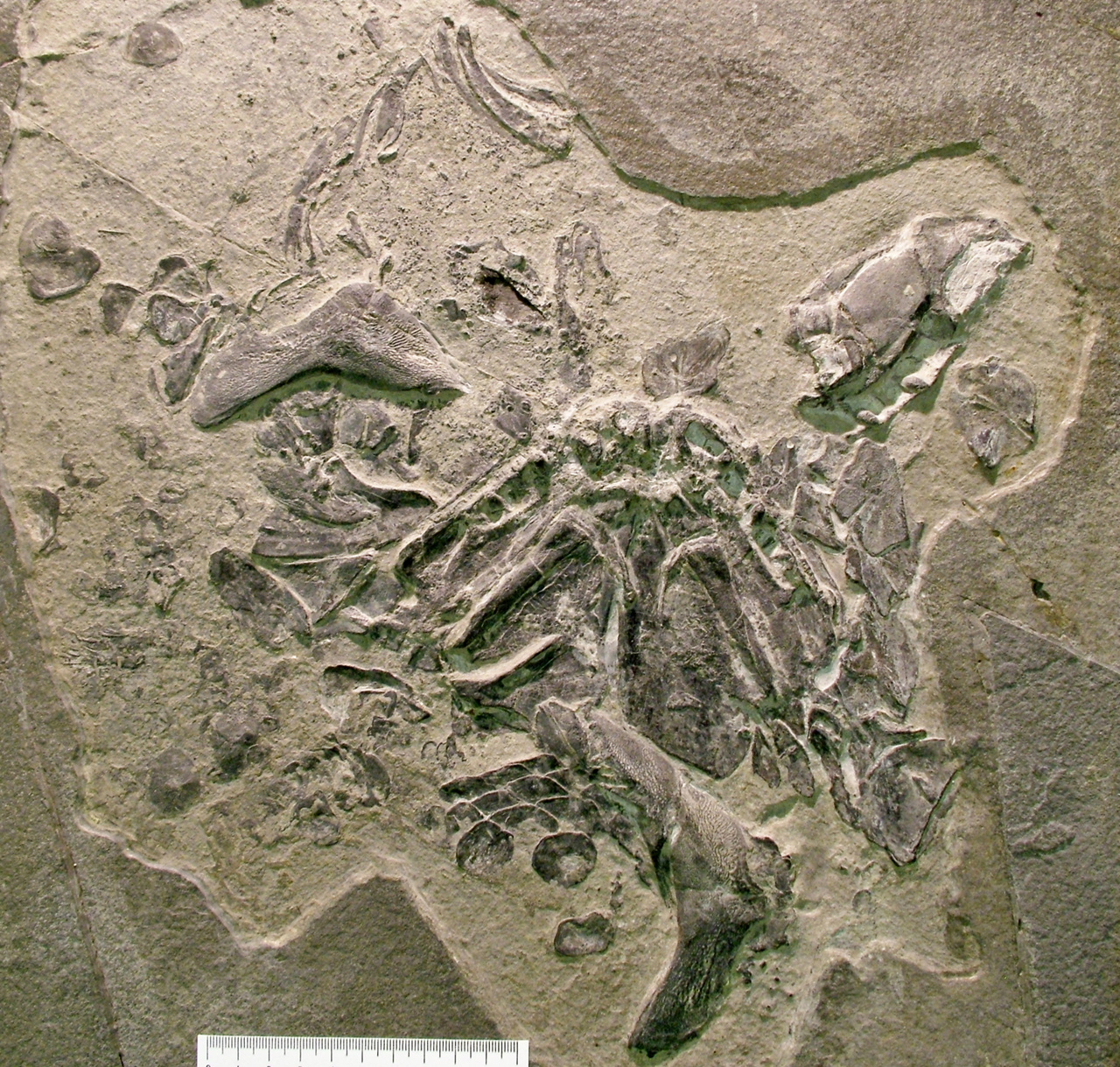 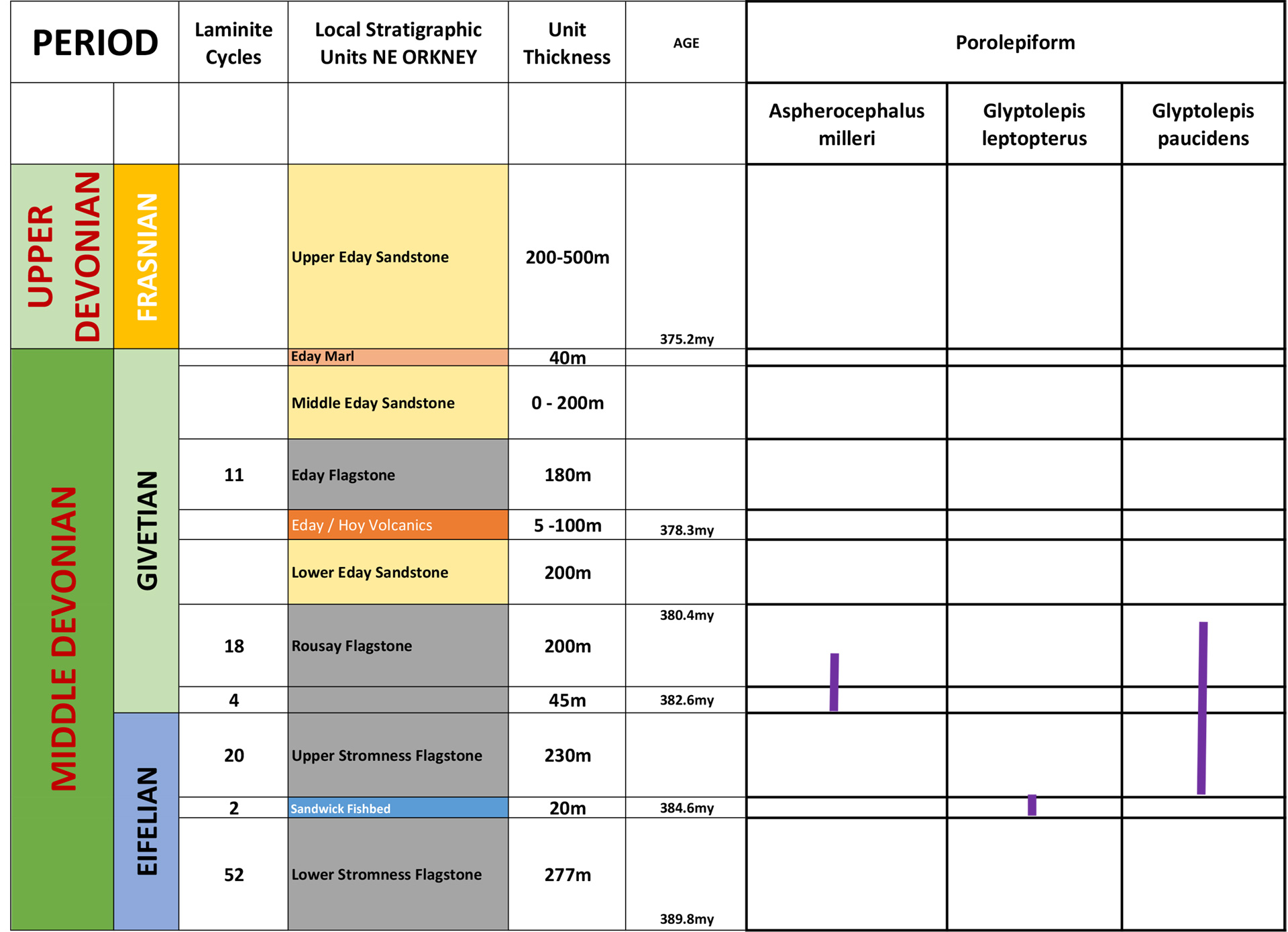 Biostratigraphy of the porolepiforms of Orkney

In the Orcadian lake, the porolepiforms were fast swimming fish with strong teeth and were the top predators. They are evolutionary closely related to the first vertebrate land animals found in the Upper Devonian. They biggest could reach a length of more than a metre. They are mostly found as loose elements, such as, scales, teeth and head plates, in the sediments indicating a shallow environment. Rarely they are found completely articulated, mostly in sediments indicating lake deposits lacking oxygen.

The porolepiform fish found in Orkney have a problem with their classification and names as some of the species in fact consisted of more that one species. Originally Agassiz named a porolepiform from the Moray Firth Glyptolepis leptopterus. These deposits are at the Sandwick fish bed horizon and the same species is found in Orkney in the Sandwick fish bed. This species is often articulated. Agassiz later named a new porolepiform species from Orkney for higher deposits Platygnathus paucidens which was based on disarticulated remains. This species was later named Glyptolepis paucidens based on articulated specimens found in Caithness in Achanarras, which is also at Sandwick fish bed horizon. However, as pointed out by the fish expert Professor Per Ahlberg in his 1989 PhD thesis we cannot show that the disarticulated remains described by Agassiz are the same species found at Achanarras. He proposed a new name for the Achanarras fish (Glyptolepis polysquama). He also showed that another species was present above the Sandwick fish bed in Orkney which he named Asperocephalus milleri. The problem is that these new names are not published and so are considered nomen nudum (not valid names). What this all means is that in Orkney the disarticulated Glyptolepis remains could be G. paucidens or G. leptopterus (or indeed another Glyptolepis species). A. milleri is very distinctive but has an invalid name. In science you must do the best you can, so here we refer to G. leptopterus in the Sandwick fish bed and G. paucidens and A. milleri in the horizons above. One day someone will described all these disarticulated remains in detail and try and sort out the classification, but it is a big job.

The porolepiforms are generally larger than the osteolepiforms and had scales ornamented with tubercles and ridges. Sometimes the tubercles also have cosmine, dentine with an enameloid cap (see pictures below).

Morphology and histology of Porolepiform fishes 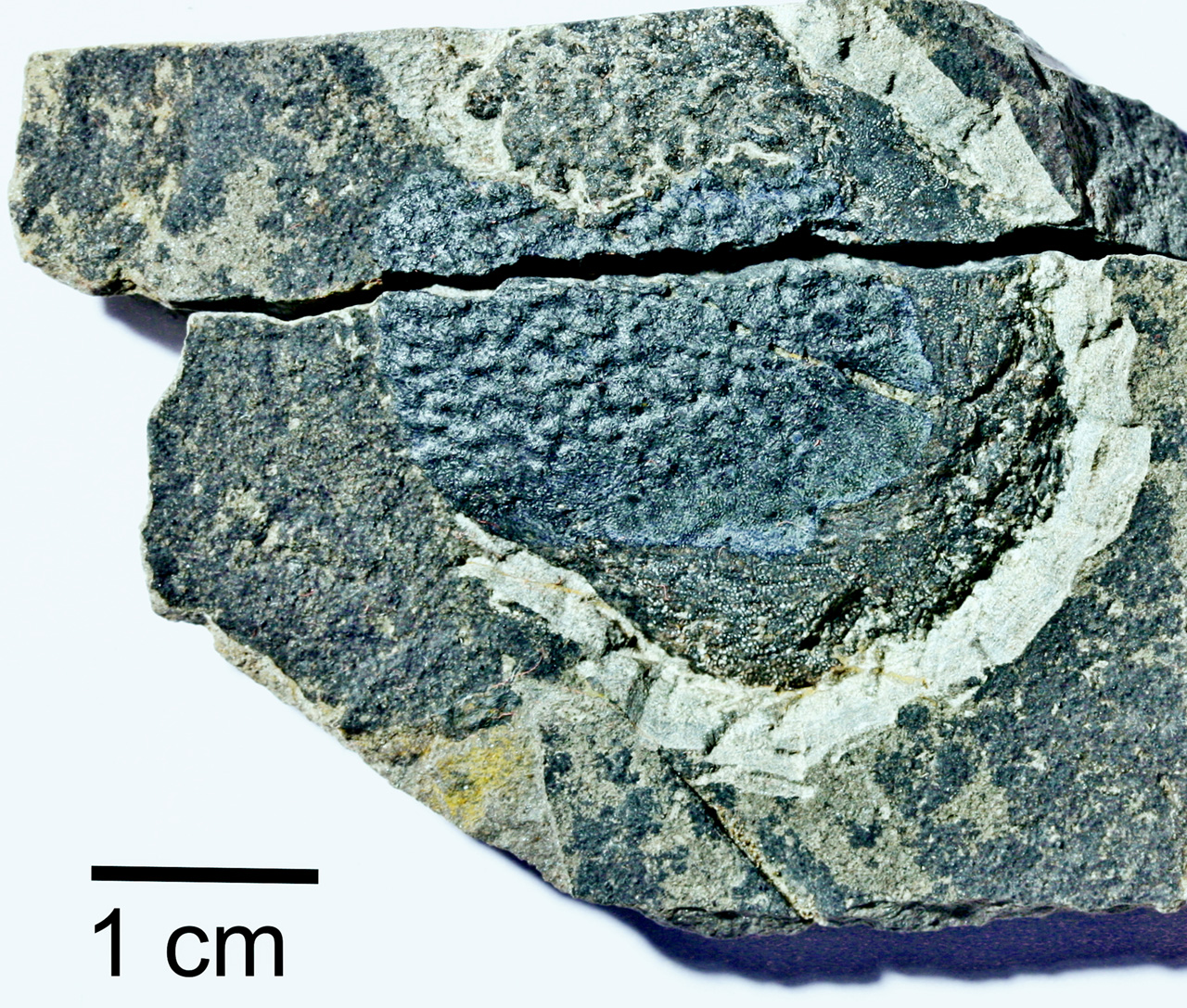 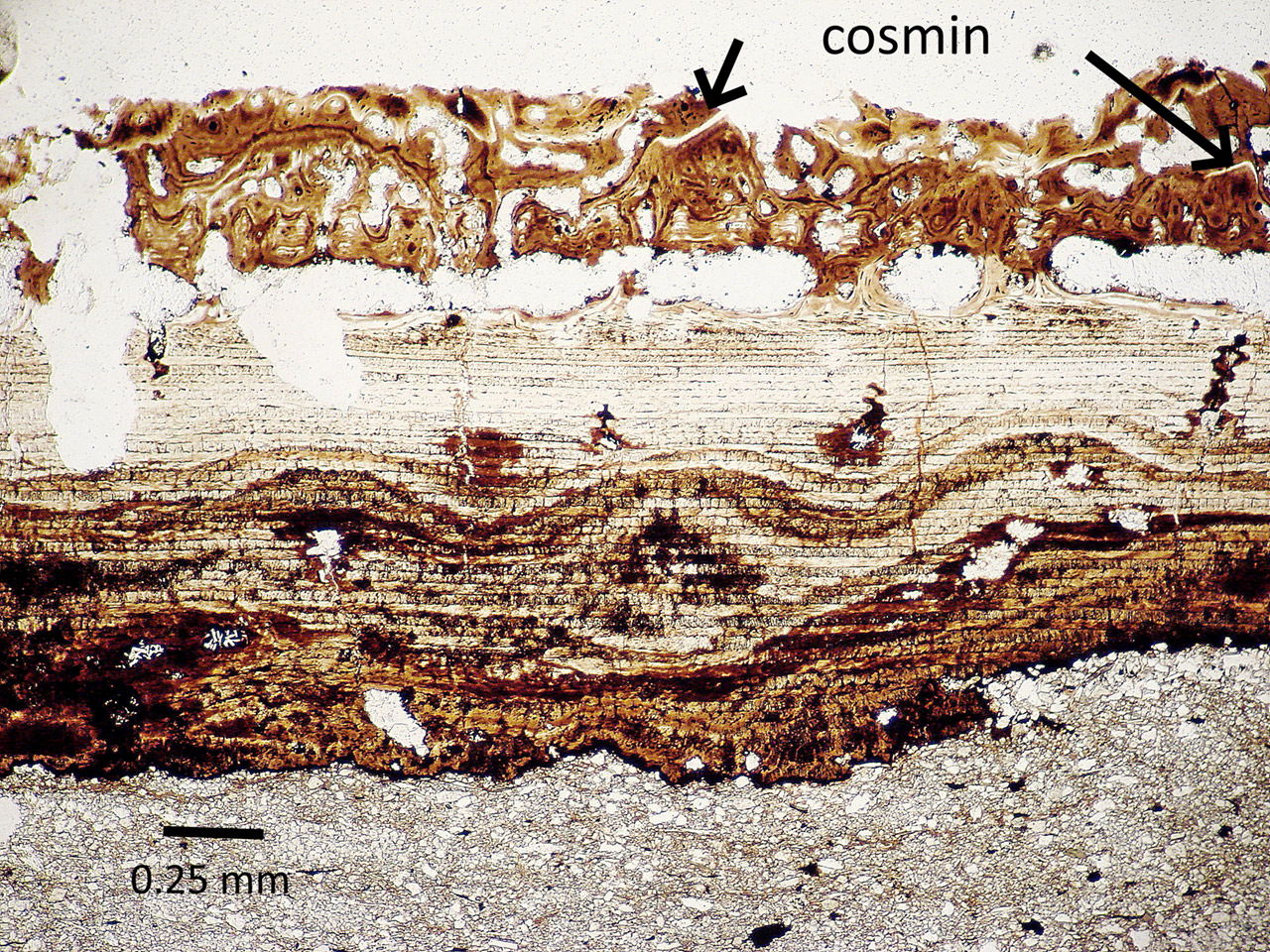 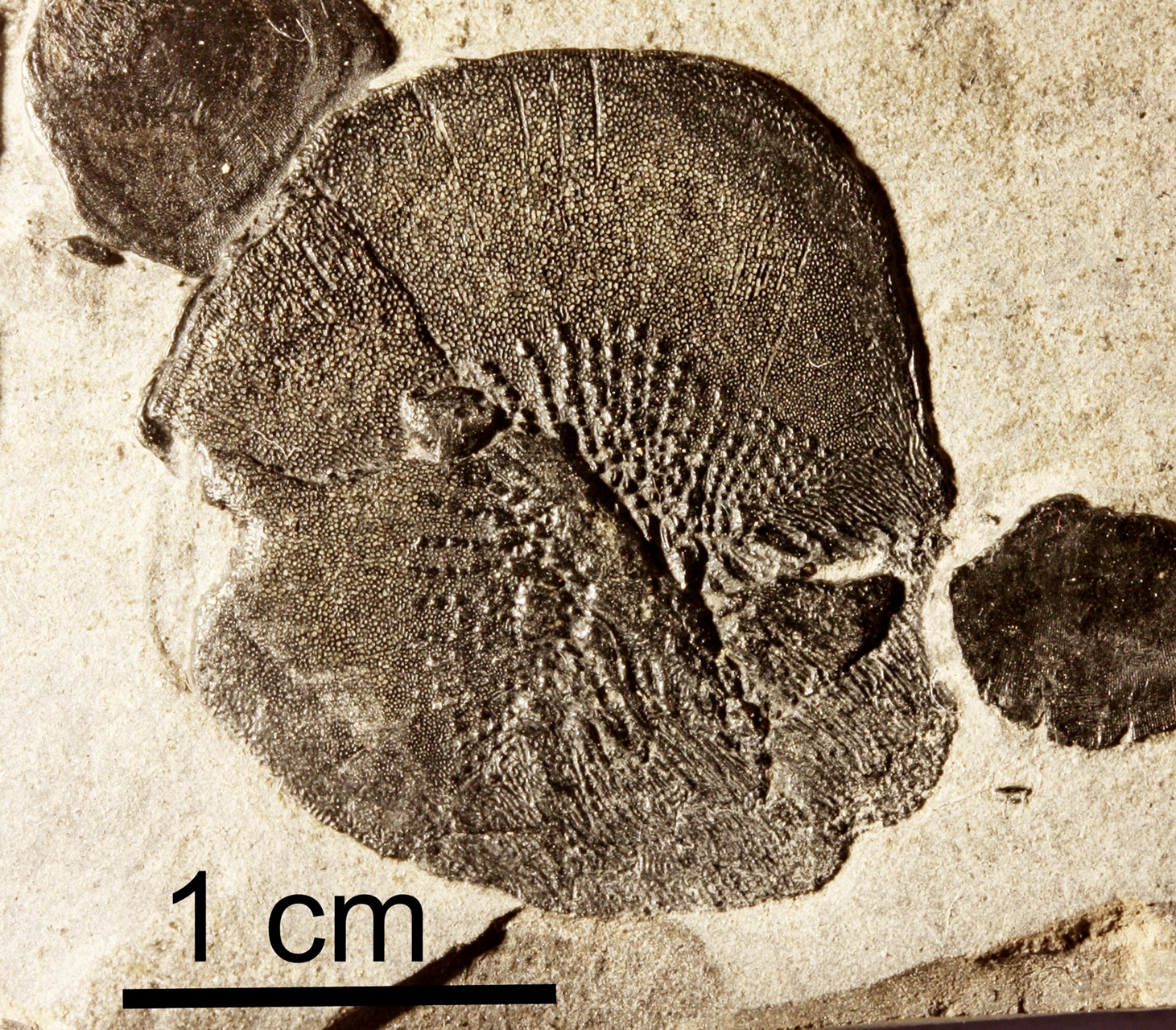 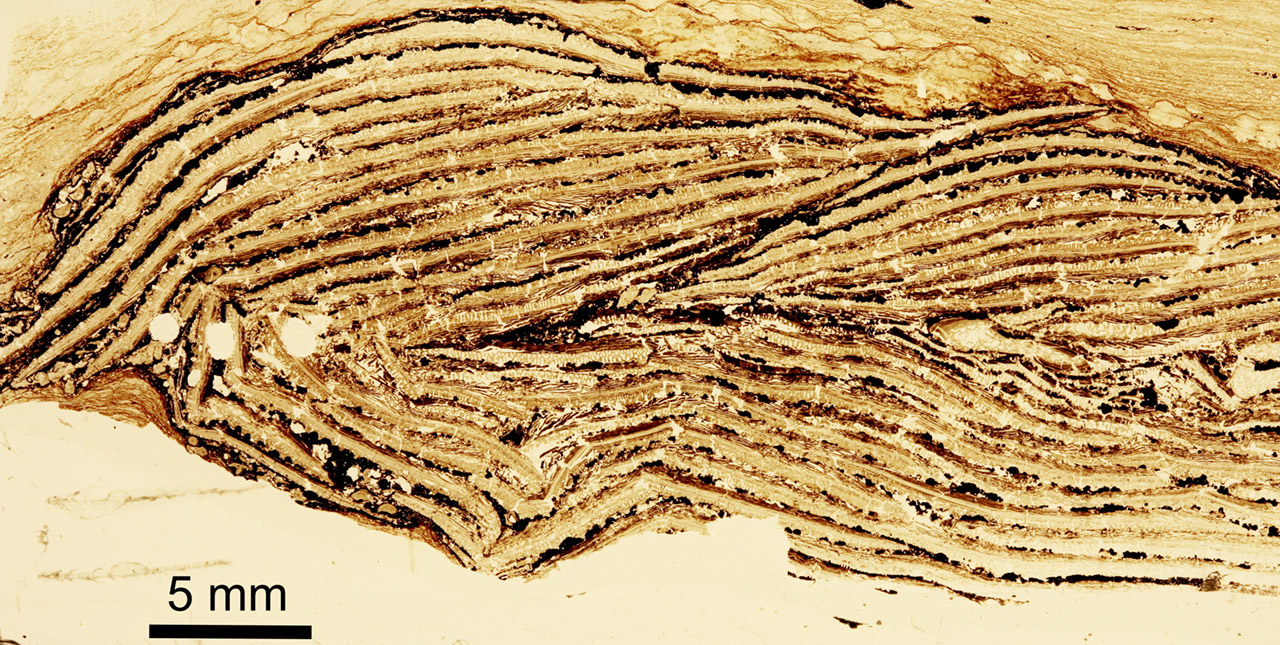 Section of body scales in position.

Picture of scale and several photomicrographs of thin sections. 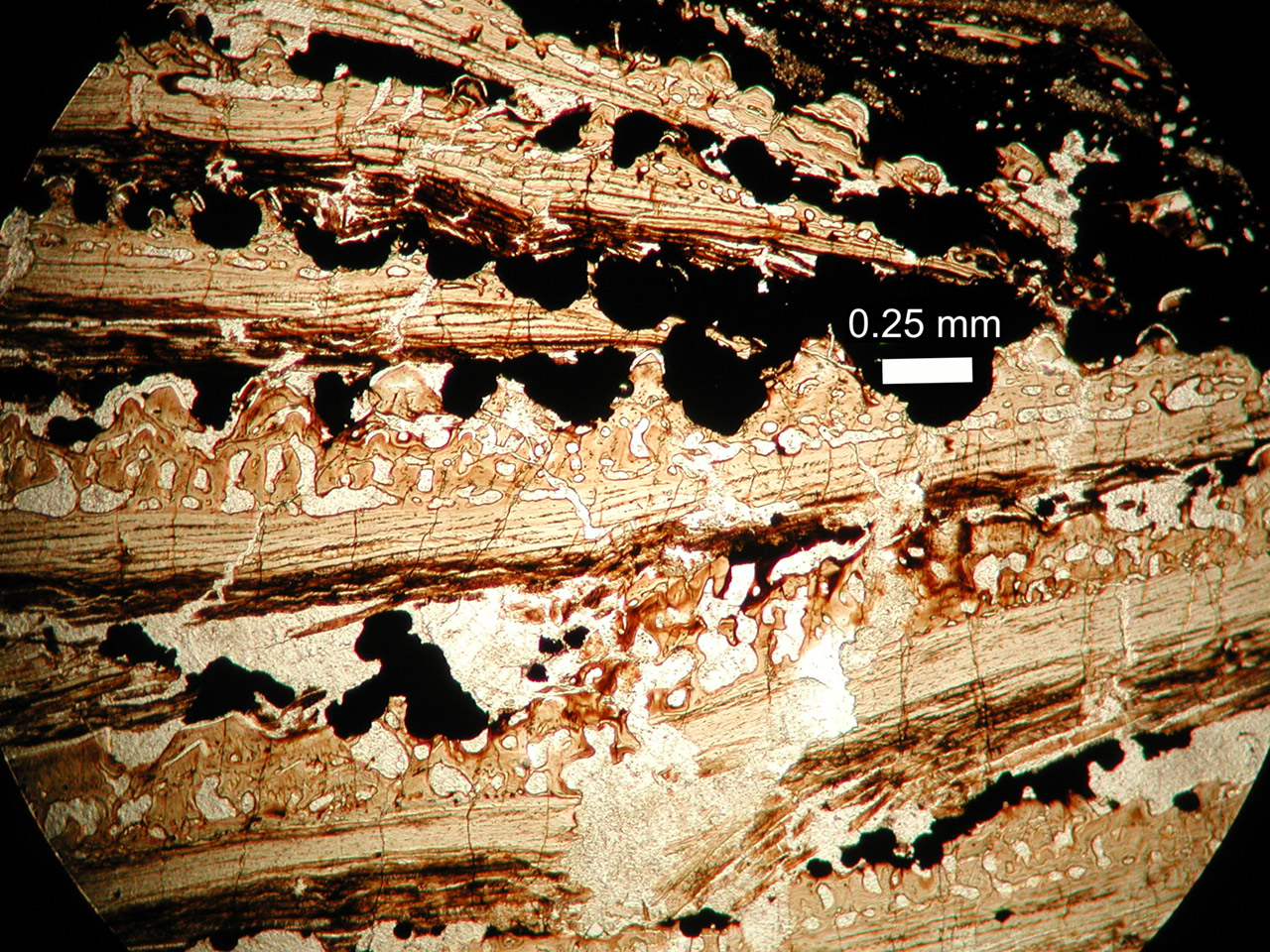 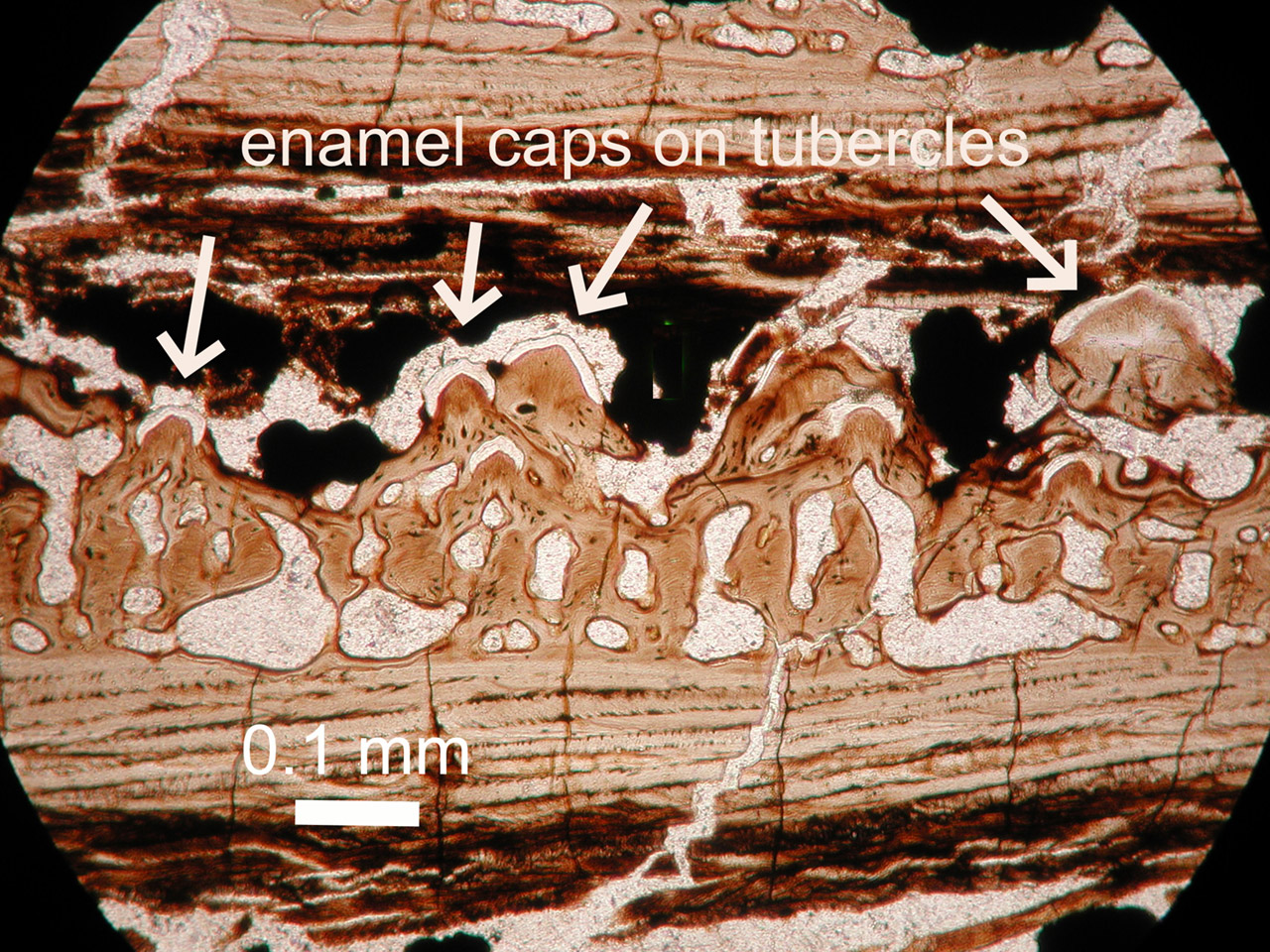 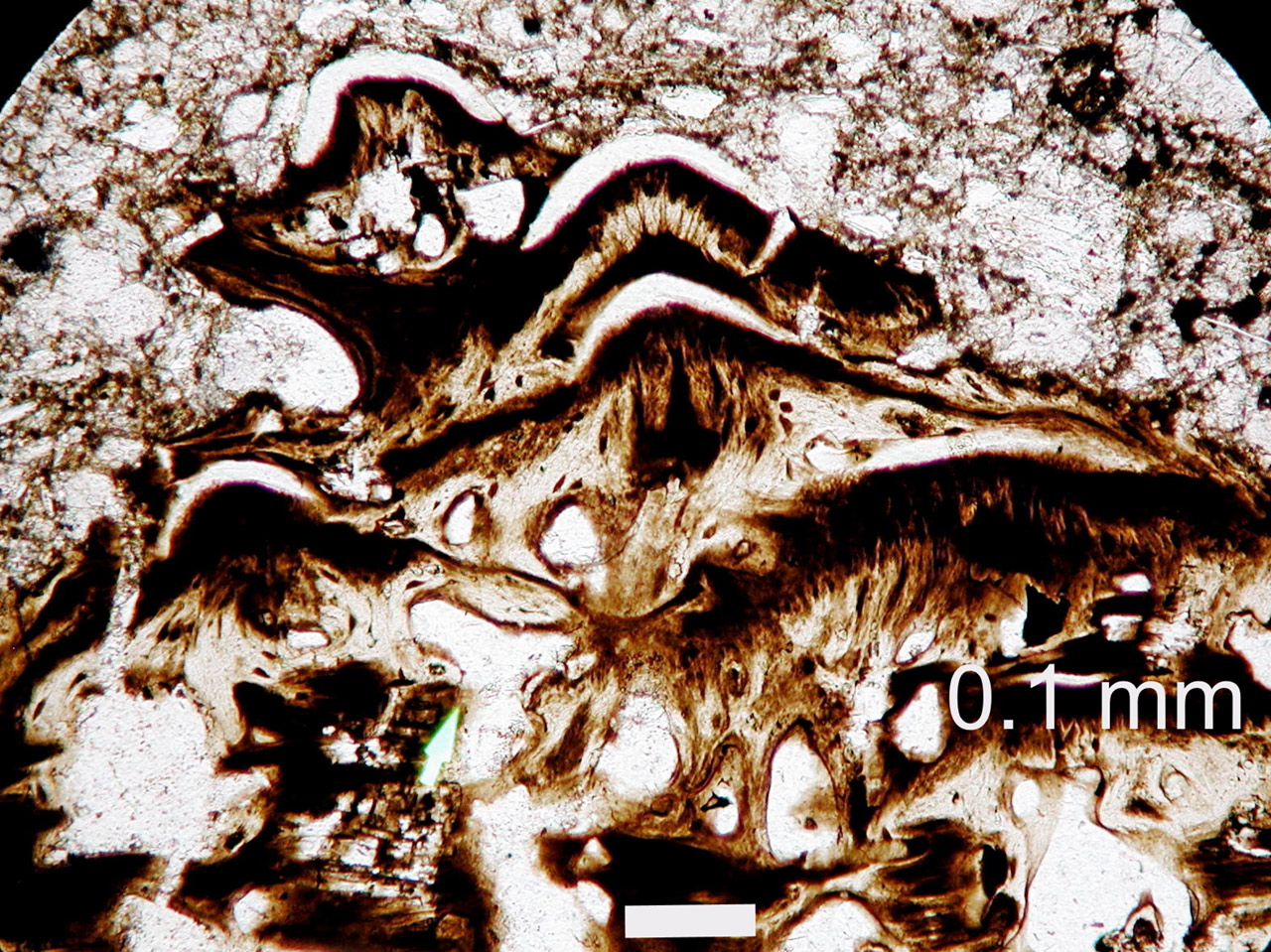 Part of scale showing tubercles with enamel with close up. 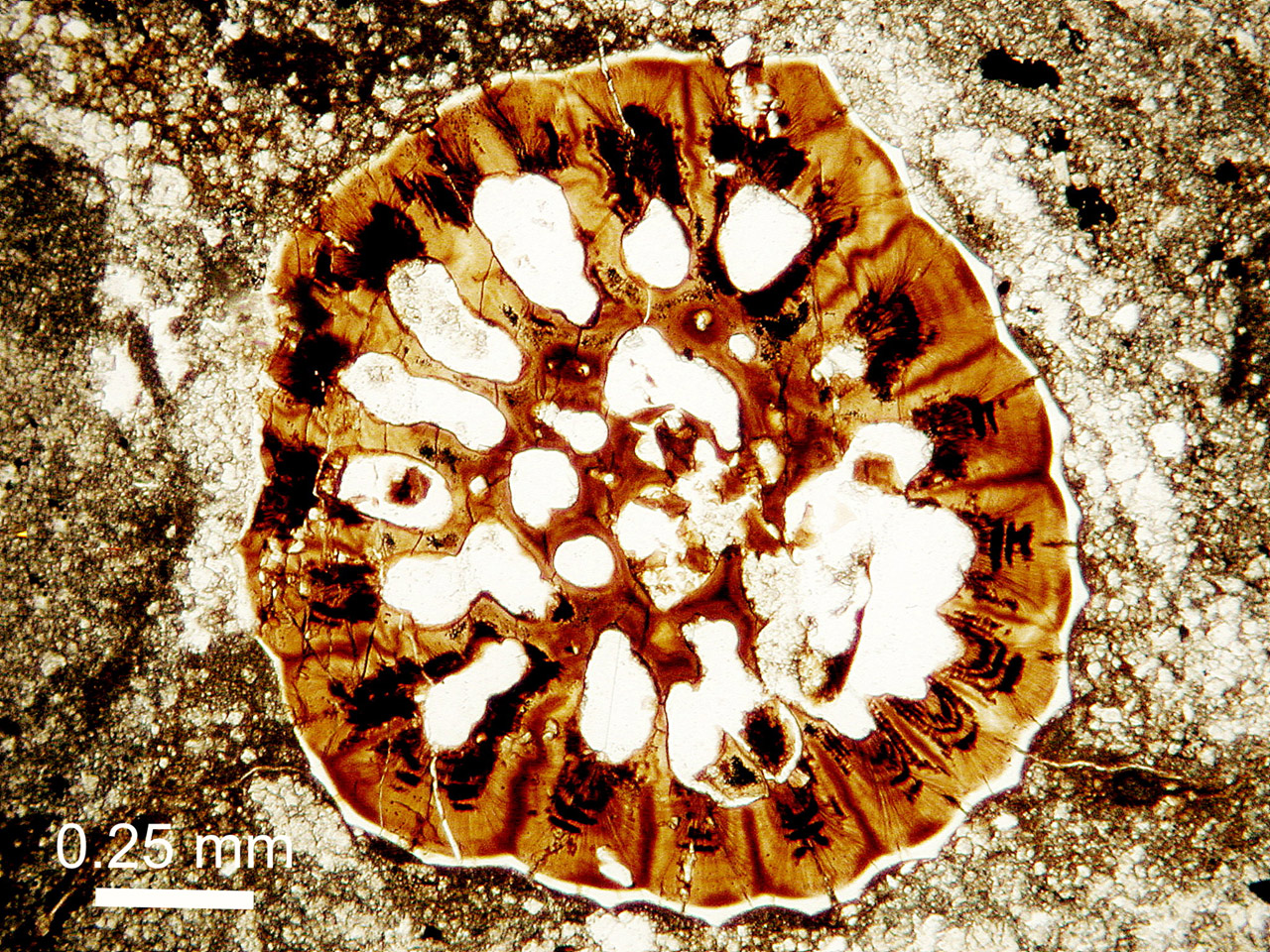 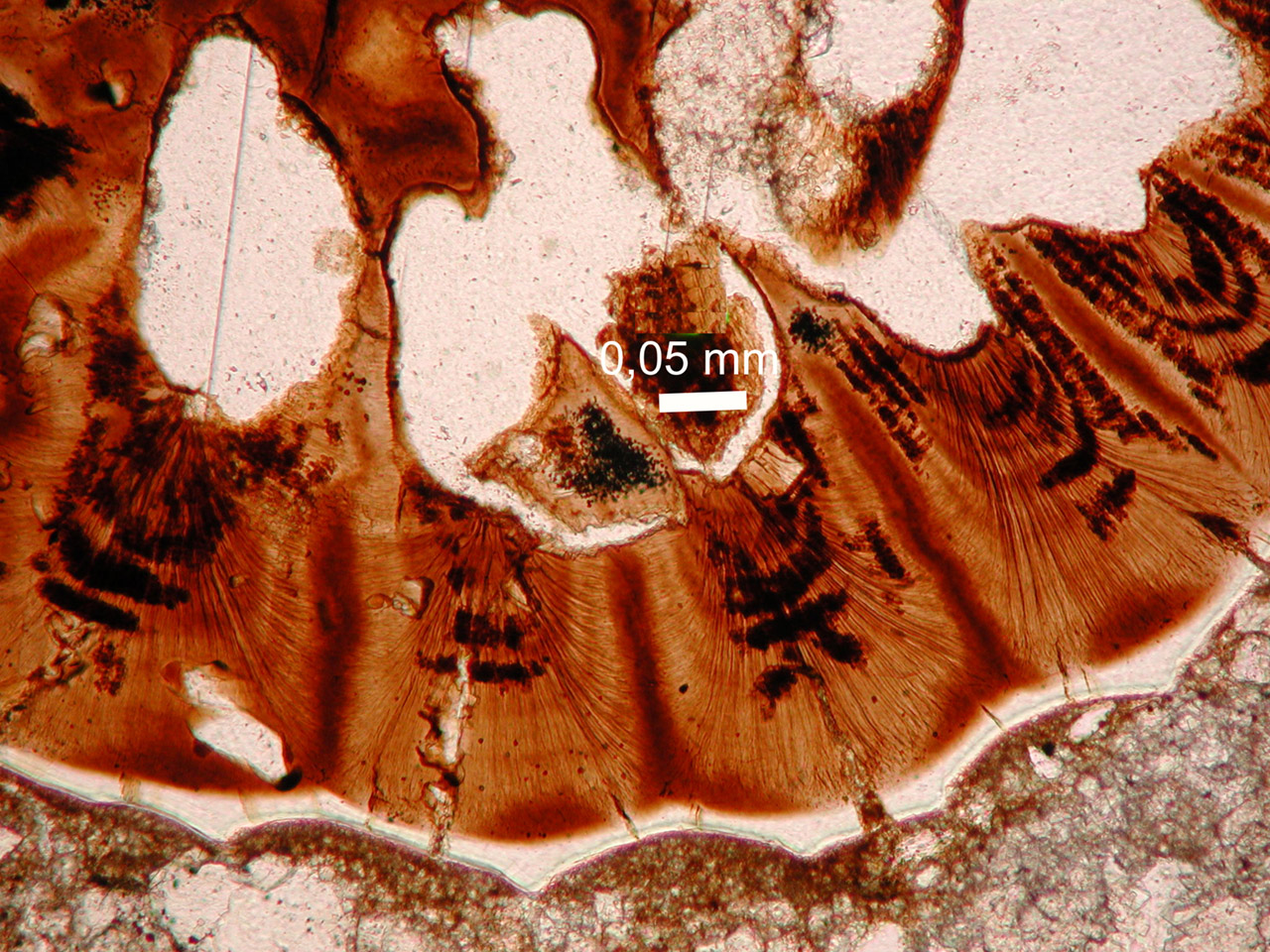 Section of a labyrinthodont tooth of Glyptolepis showing an enamel lining on the outside.