As the climate warmed rapidly at the start of the Holocene, heathland was replaced by grassland with tall herbs.  In records from other parts of Scotland this community was rapidly replaced by tree-dominated vegetation, but in west Mainland grassland persisted for as much as 2000 years.  Records covering this period are available from Crudale Meadow, Quoyloo Meadow (Bunting, 1996) and The Loons (Moar, 1969).  The sequences are dated by correlation only and by the Saksunarvatn tephra layer (Bunting, 1995), which was deposited around 9100 BP.  The layer occurs mid-way through this period at Crudale Meadow and Quoyloo Meadow.  More sheltered eastern parts of the archipelago may have become wooded more rapidly.

Around 8000 BP (8900 cal yr) woodland began to expand around Quoyloo Meadow and Crudale Meadow, and this vegetation type remained dominant in the west Mainland region until around 5600 cal yr.  The timing of its decline varies between sites.   This woodland phase is recorded at other west Mainland sites (Moar, 1964, 1969; Keatinge and Dickson, 1979) and from at least two other islands, Hoy (Edwards et al., 1994) and Rousay (Bunting, 1996).  Woodland cover in west Mainland was extensive, if open, with arboreal pollen percentages of up to 80% recorded.  The woodland community was mainly Corylus avellana, Betula and Salix and possibly Alnus glutinosa at wetland edges or fenland areas (Bunting, 1996). The understorey taxa recorded are similar to the present-day tall herb communities of the dales and the understorey of the woodland fragment at Berriedale (Chapman and Crawford, 1981). 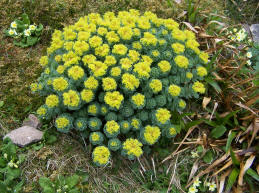 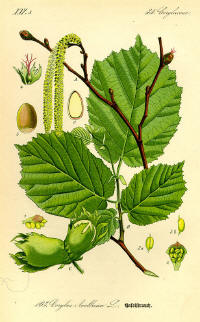 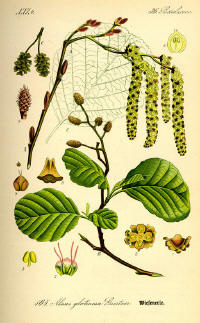 At Quoyloo Meadow, the woodland community was disturbed around 7400 cal yr and ferns and grasses increased in abundance.  An increase in the microscopic charcoal curve also occurs, and it appears that the cause of this disturbance may have been Mesolithic human activity within the catchment.

Betula-Corylus woodland became fully re-established after the disturbance phase, apparently with the addition of Quercus, Alnus glutinosa and Pinus sylvestris trees (Bunting, 1995).  This may suggest that these taxa were components of the woodland in other parts of the islands (in more sheltered easterly areas) and were able to establish on the western side of the island group under the shelter of existing woodland when an opening occurred.  The western sites studied are mostly in areas where rough grazing and peatland are more prevalent than improved pasture and arable cultivation at the present day.  This implies that the woodland cover in the more sheltered east of the archipelago and on more fertile soils was denser and possibly more diverse.  A gradient of increasing woodland diversity from west to east is seen in other island groups such as the Western Isles (Fossitt, 1990) and Shetland (Bennett and Sharp, 1993).  This is supported by a partial sequence from Liddle Bog in South Ronaldsay (Bartlett, 1983), which included samples where the percentages of Quercus pollen were around 10% and Pinus sylvestris around 20%.

In more exposed areas such as Wastlee Moor on Hoy and the hill-land of Rousay woodland cover appears to have been less extensive (Bunting, 1996), with isolated trees and small patches of woodland (probably occupying the most sheltered areas, as the woodland at Berriedale does today) forming part of a mosaic of vegetation along with heath and herbaceous communities.

The late postglacial period begins with the decline of woodland in Orkney at approximately 5000 BP (5600 cal BP).  Possible causes include autogenic factors and human-induced pressures such as grazing density, changing fire regime and direct clearance and probably varied between localities.  In the Bay of Skaill area the catastrophic formation of the Bay itself (Keatinge and Dickson, 1979) and the subsequent establishment of an extensive blown sand deposit may have contributed to the loss of trees.  During the woodland phase the species composition of the vegetation of west Mainland was relatively uniform.  After the woodland decline, the patterns of vegetation development around each site differed, but four possible sequences of events can be distinguished.

1 – In some localities autogenic processes dominated.  In this case few, if any, indicators of human activity are recorded, and woodland taxa were replaced by heathland taxa as moor and blanket peat developed.  This occurred in remote, exposed localities like Loch of Torness on Wastlee Moor, an area remote from human habitation and used for rough grazing today.

2 – In other areas, the decline in woodland is associated with a transition within the sedimentary basin from open water to a vegetated wetland environment (e.g. at Crudale Meadow; Bunting, 1995) or with an expansion of peat around the existing wetland (e.g. Glims Moss; Keatinge and Dickson, 1995).   This transition meant that local sediment-forming vegetation elements became more abundant in the palaeo-ecological record.  Such sites are generally surrounded by poor grassland, moorland and blanket peat and in areas used today for rough grazing.  However, the taxa characteristic of these upland communities are also present in the mire surface vegetation, and although the local pollen signal does not necessarily drown the dry land signal, it can obscure it.  The record (archaeological and palaeo-ecological) suggests that human impact in the immediate vicinity of these basins has been low.  The main pressures probably come from a low density of grazing animals or from accidental or deliberate burning of vegetation in the wetland itself or on the surrounding slopes.  The record of such sites during the later Holocene is problematic since the input of the surface vegetation may obscure the record of human activity in the wider area.

3 – Elsewhere the woodland declined without any evidence implying the causal involvement of humans, but human activity was clearly recorded thereafter.  At Loch of Skaill (Keatinge and Dickson, 1979) the woodland decline was probably associated with the formation of the Bay of Skaill and the widespread deposition of a layer of blown sand in the region.  Woodland was replaced by a tall herb grassland which was present for “…an approximate duration of 230 years…” (Keatinge and Dickson, 1979, p600) before being replaced by pasture vegetation with disturbance indicators such as Plantago lanceolata.  This probably reflects the introduction of Neolithic livestock.  At Loch of Knitchen in Rousay, woodland decline and replacement by heathland apparently occurred largely in response to autogenic factors (Bunting, 1996).  The subsequent record suggests that although human impact within the basin was negligible, crop cultivation and associated settlement activity was occurring on the coastal fringes of the island.

4 – At some sites human activity appears to have actively contributed to the decline in woodland as well as occurring around the site subsequently.  Quoyloo Meadow (Bunting, 1995) exemplifies this, and the short, undated sequence from Pow (Keatinge and Dickson, 1979) suggests a similar pattern.

The persistence of small woodland fragments after the main decline at around 5000 BP is suggested by several sequences.  For example, at Burn of Rusht (Keatinge and Dickson, 1979) in the west Mainland hills, the pollen sequence suggests that an open Betula woodland with a tall herb understorey was present until shortly before peat initiation, which occurred at around 3400 BP (3700 cal BP).  The record from Liddle Bog on South Ronaldsay (Bartlett, 1983), which probably dates from the Bronze Age, also includes higher than modern percentages of arboreal pollen taxa.  At Loch of Knitchen on Rousay (Bunting, 1996) arboreal pollen percentages remain at twice the modern level (as determined from surface samples) after the main woodland decline until 4400 BP (5100 cal BP).  This suggests that a few trees persisted in the vegetation around the loch until the late Neolithic.

The continued presence of trees, either as isolated individuals or as small copses, is also suggested by finds of charcoal from Neolithic and Bronze Age archaeological monuments.  For example, Quercus was identified from Isbister chambered cairn (Hedges, 1983), Liddle burnt mound (Hedges, 1975) and Quanterness chambered cairn (Renfrew, 1979) and Corylus bark was used to line drains at the Neolithic settlement of Rinyo (Childe and Grant, 1947).  Although some of the wood preserved in these contexts could have originated outside the islands and arrived as driftwood (Dickson, 1992) the presence of bark, abundant twigs and Corylus nuts suggest that at least some of the wood had a local origin.  The woodland fragment at Berriedale, Hoy, might also represent a survival.

Further development of the landscape

Heathland and blanket peat had begun to develop in the west Mainland hills (Keatinge and Dickson, 1979) and on the east coast of Hoy (Bunting, 1996) from 6000 BP (6800 cal BP), and in the hills of Rousay from 5700 BP (6500 cal BP).  In these areas woodland was directly replaced by heath vegetation as the dominant landscape element.  In other parts of west Mainland tall herb communities developed, possibly with some woodland remnants.  Peat began to form at three west Mainland sites between 3400 BP and 3000 BP (3700-3200 cal BP) (Keatinge & Dickson, 1979).  In some cases peat development was preceded by an increase in the grazing indicators (e.g. at Mid Hill, Keatinge and Dickson, 1979; Wideford Hill, Jones, 1979), suggesting that an increase in human-associated landscape pressures might have been a contributing factor in the spread of peat land.  Keatinge and Dickson (1979) suggest that a climatic ‘deterioration’ (which apparently occurred throughout northwestern Europe at this time) might also have contributed.  However, there is no clear evidence from the longer sequences for such a climatic deterioration, and the timing of peat spread varies throughout the island group (although too few dates to decide whether there is a significant increase in the rate of initiation, spread or growth of peat at this time).  A possible increase in the presence of shrubby taxa at Lesliedale Moss (Davidson, Jones and Renfrew, 1976; Jones, 1979) occurs at this time, and samples from ditch fill associated with Maes Howe chambered cairn (Jones, 1979) suggest a spread of heath taxa and a decrease in human activity around that monument in the mid-late Bronze Age.  However, at Loch of Skaill (Keatinge and Dickson, 1979) there is apparently a slight increase in human activity at this time.

Evidence for changing landscape use in the Iron Age is scant.  There is a change in the charcoal signal at Loch of Knitchen (Bunting, 1996) which might imply an increase in management-linked deliberate fire-setting.  Disturbance indicators such as Artemisia and Plantago lanceolata increase slightly after 2150 BP (2100 cal BP) at Glims Moss, which Keatinge and Dickson (1979) tentatively suggest that this represents an increase in human activity around the site.

The evidence suggests that the major impact of human activity in Orkney occurred shortly after the decline in woodland.  Subsequent changes in cultural activities and settlement style have had a much less marked impact in the palaeo-ecological record, perhaps suggesting that land use patterns remained constant while other aspects of human activity altered.  However, such impact might be absent from the record, because the sites studied are less sensitive to such changes (e.g. once heathland is established, further pressure will not lead to such a marked change; once wetland development is occurring in a basin, the pollen record reflects a smaller source area and the dry land signal is diluted by the surface vegetation), or because the sites studied do not represent the whole range of landscape histories in the island group (sites in the east or, say, on the coast of Rousay might show a different pattern).  The broad patterns of vegetation change in west Mainland and to some extent on Hoy and Rousay are clear and coherent.  However, the lack of sites from the east and north of the archipelago means that extrapolation to the rest of the island group is less certain.