Around 15 thousand years ago, the last ice sheet disappeared to leave a barren, scoured terrain. As temperatures rose rapidly, pioneer plants arrived from the south and the low ground was soon carpeted with a rich herbaceous cover. For a bleak thousand years, there was a reversion to Ice Age conditions, only arctic species clung on and small glaciers  reformed on Hoy. With the melting of the last glaciers and the amelioration of climate at the start of the Holocene, around 10 thousand years ago, the pace of environmental change slackened. The present interglacial has seen many slow changes in the landscape, with the development of soils, the succession of vegetation types and the rise of sea level drowning the major valleys. The steady pace of change has been interrupted by a sequence of natural disasters, including tsunami, heavy falls of volcanic ash and extreme storms. Man has been the main agent of landscape change in the last 5000 years, initially causing the loss of trees through felling and grazing by domestic animals but later affecting the entire landscape mosaic of soils, vegetation and peat development. In modern history, we have begun to physically reshape the land, opening quarries, reclaiming land, opening cuttings and creating building sites. Man is now a shaper of landscape.

“Those people, between four and five thousand years ago, also responded to dramatic geological patterning, and to the shock of sudden views” 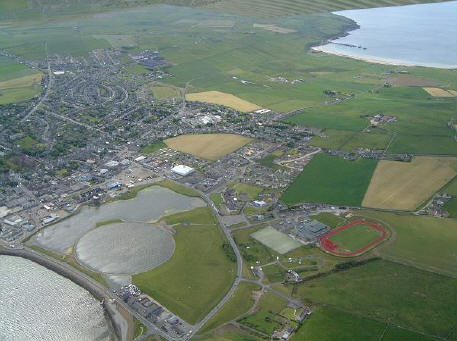 Kirkwall and the Peedie Sea - Image courtesy of Alan Moar