Orkney forms an ancient divide between the North Sea and the Atlantic. The area shed sediment to basins lying to the west and east in response to uplift in the Early Tertiary. These sands are over 1 km thick in parts of the outer Moray Firth and so the erosion must have been considerable. Godard has reconstructed the drainage system immediately prior to glaciation by combining to valley systems on land with those submerged by sea level rise on the surrounding sea bed. Glacial erosion has cut through low watersheds to form the archipelago of today.

The Memoir (Wilson, et al., 1935) notes that the NNW-SSE valleys of Westray Firth, Scapa and Pentland Firths run parallel to the valleys of the Oykel and Shin. One interpretation is that all these drainage lines were superimposed from cover rocks, with the main watershed formerly lying west of Orkney. The dips on Permo-Triassic rocks in the Sule Sgeir Basin suggest, however, that these rocks have tilted towards the west after deposition (Evans, 1997). 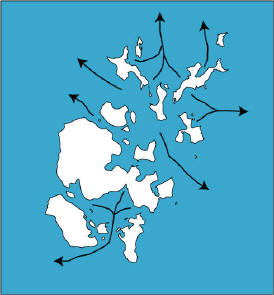 Godard's (1956) reconstruction of the preglacial drainage lines of Orkney