Definition: a land surface of low relief reflecting long term erosion. The surface may now lie well above sea level as a result of uplift or be tilted or deformed as a result of later tectonics.

Godard (1956) provides almost the only account of erosion surfaces on Orkney, an extension of his mapping of the preglacial relief of the entire Northern Highlands (Godard, 1965).

A summit surface is recognised on Hoy, including the fragments of high plateau on Ward Hill, Cuilags and Knap of Trowieglen. This surface covers a broad height range from 150-365 m, probably as a result of Tertiary faulting. On North Mainland, flat summits at 170-185 m may represent the last remnants of a lower and later surface, slightly deformed but not significantly faulted. The Lower Surface at 60-100 m is more widespread and also little deformed. It is correlated on the basis of its height and form with the Niveau Pliocene, a surface found around the fringes of the Northern Highlands. 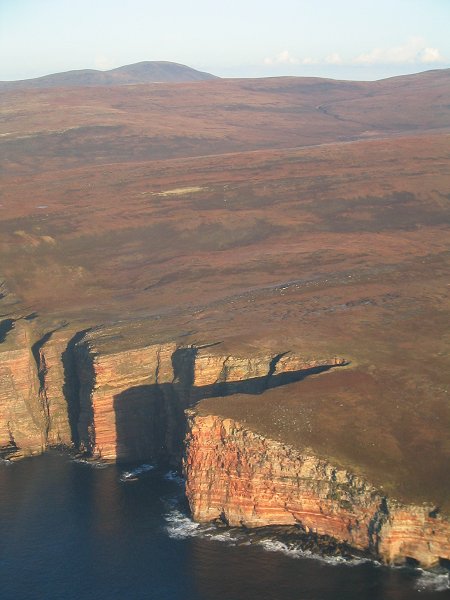 The undulating erosion surface of the high hills of Hoy. View from Burn of Forse northwards towards Ward Hill, seen in the background.