The oldest sedimentary rocks in Orkney are probably of Lower Devonian age. They outcrop to the north and east of the Yesnaby exposure of basement rock. 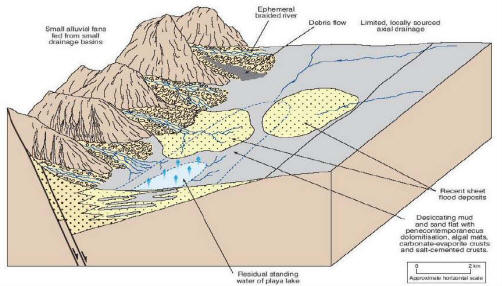 The Harra Ebb formation (60-100m) consists of breccias, sands muds, and conglomerates deposited on an uneven surface of an eroded basement gneiss hill. Paleocurrents show that current movement is to the west and the deposit was an alluvial fan. probably flowing down slope.

Interesting solution/erosion hollows are are formed at several spots on the Harra Ebb unconformity surface. They were subsequently filled with Yesnaby Sandstone. The origin of these erosion features on the unconformity surface is unknown. The cylindrical shape of the one (1m x3m) argues for a karst like solution surface.

The breccias and beach sands overlying the basement rocks on the West Shore, Stromness, interleave with the lake sediments and are therefore contemporaneous and of Middle Devonian age. The breccias on the east side of the Stromness Basement Hill / Island are more similar to the Harra Ebb lithologies while the breccia overlying the Quoyelsh Felsite consists mainly of Felsite clasts and boulders.

A borehole at Warebeth (a mile west of Stromness) revealed 200 ft (61m) of purple siltstone, sandstone and breccia below the flagstones. The lower flagstone succession in the borehole directly correlates with the West Shore succession.

The Yesnaby Sandstone formation consists of up to 200m of desert sandstone (dune bedding clearly shown in the sea stack of the Yesnaby Castle). The Harra Ebb formation was  tilted and eroded before the dune sands  were deposited on  the uneven surface . The sand thus varies in thickness over the area.

On the south side of Garthna Geo the Yesnaby Sandstone filled in a fossil 20m cliff cut into both the Basement Complex and the Harra Ebb. The sand overflows the cliff top and thins to a “Zero Edge” punch-out to the south at the head of Inganess Geo.

These strata were finally tilted about 10 degrees to the west before being overlaid by the Middle Devonian lake sediments. The contact is characterised by lag deposits with white quartzite  pebbles 1-3cm across.

This porous desert sand is occasionally blackened with shiny black bitumen (dead residue of crude oil) showing that it had once been a reservoir for hydrocarbon liquids. This reservoir was breached recently when the rocks came to near the surface. It is estimated that this OIL RESERVOIR could have held between 350 and 1,000 Million Barrels of Oil in place.