The Eday Group including the Hoy sandstones (up to 800m thick) is composed largely of yellow and red sandstones with intervening grey flagstones and red/green marls.

The Eday Group comes from two major river systems flowing into the lake basin, one flowing southeast over Eday and a second much larger one flowing northwest over Dunnet Head (Caithness), Hoy and the South Isles. The alluvial plains from these river systems overlapped and merged in the East Mainland and South Isles.

Contemporary tectonic movements (faulting) in the region, early in its formation, was associated with alkaline volcanic deposits of ash and lava flows. These igneous rocks are found near the base of the Lower Eday (Hoy) Sandstone at Rackwick and Melsetter on Hoy and at Houton Head, Orphir. Similar lavas are also found at the Point of Ayre, Deerness and Hacro’s Ness, Shapinsay associated with the Eday Flagstones.

There are five separate rock units in the Eday Group, easily distinguished in the North Isles and eastern Orkney by the intervening contrasting sediments of the Eday Flagstones and the Eday Marls in a mainly sandstone sequence.

The sandstone content of the Eday Group increases to the south and west towards Hoy. In Hoy the flagstones and marls are not present as distinctive units and thus the Hoy Sandstones form a single block of red, pink and yellow sands 800m thick of mixed fluvial (river) and aeolian (desert) origin with subordinate bands of marl above a basal volcanic sequence.

was formed during an arid period in the basin at a time of local contemporaneous faulting and folding. It varies from 35m at the margin to nearly 180m in the core of the Eday Syncline basin, and 200m+ on the south side of the North Scapa Fault. The northern river and much larger south-western river systems flowed over an open flood-plain. They deposited sands and filled tectonic depressions to leave a regional low gradient surface.

These sands were reworked by the desert winds to form dune sands which accumulate against the active fault scarps. Early in the deposition of these sands both rivers tapped, due to major fault movements in the west, a source of quartzite, psammite and limestone pebbles giving rise to a distinctive pebble sandstone called the Stonymouth Member from the type section in Dunnet. The Stonymouth Member can be traced through Hoy where it lies above and below the Rackwick volcanics, above the Melsetter lava and within the Lower Eday Sandstones of Flotta, South Ronaldsay and Eday.

mark a return to wetter conditions with the establishment of lake sedimentary cycles (12 cycles). These lakes are best developed in eastern Orkney rapidly transgressing the alluvial plain. Individual lake cycles traced to the north and west become more marginal and some disappear to be replaced by alluvial sands. The lakes formed during this phase in Orkney were local in extent although probably linked through stream and river systems to permit the migration of fish between lakes. Westwards from South Ronaldsay the lake cycles pass laterally into aeolian (desert) sandflat deposits. No lake or marginal lake deposits have been found in Hoy.

In Eday the alluvial sands related to the northern river system returned after only four lake cycles. This Middle Eday Sand is confined to the northern part of Orkney and thins to the southeast. The sandstone disappears in the Newark Bay section (Deerness) with the Eday Flagstones passing directly into the Eday Marls. Two lake shale horizons are identifiable within Eday while other marginal lake events are recognisable as thick units of parallel bedded sands.

This is a distinctive unit of green and red silt and mud, arising from river flood deposits subjected to extensive turbulence desiccation and oxidation. The recent discovery of large halite pseudomorphs, rare marine microfossils, beds of saddle dolomite and anhydrite altered to limestone, beds of gypsum and beds with worm burrows and worm casts on ripple surfaces indicate a marginal marine floodplain.

This represents a return to sandy river deposits from both river systems, forming a wide alluvial plain. The northern fan advanced, interfingering with the Eday Marl facies until it coalesced with the southern river in the east Mainland. Aeolian desert deposits are absent in eastern Orkney but can be found in central Hoy. The uppermost preserved fluvial sands of the Eday Group in Hoy and Dunnet Head (Caithness) could be Frasnian in age.

Some have suggested it could be as young as Lower Carboniferous like the upper reservoir sands of the Clair Oil Field but with the lack of definitive fossil evidence this remains conjecture. 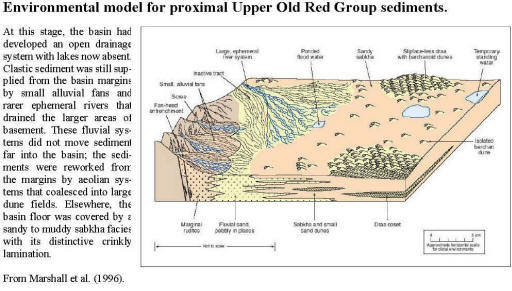