Biostratigraphy of the tetrapodamorphs for Orkney 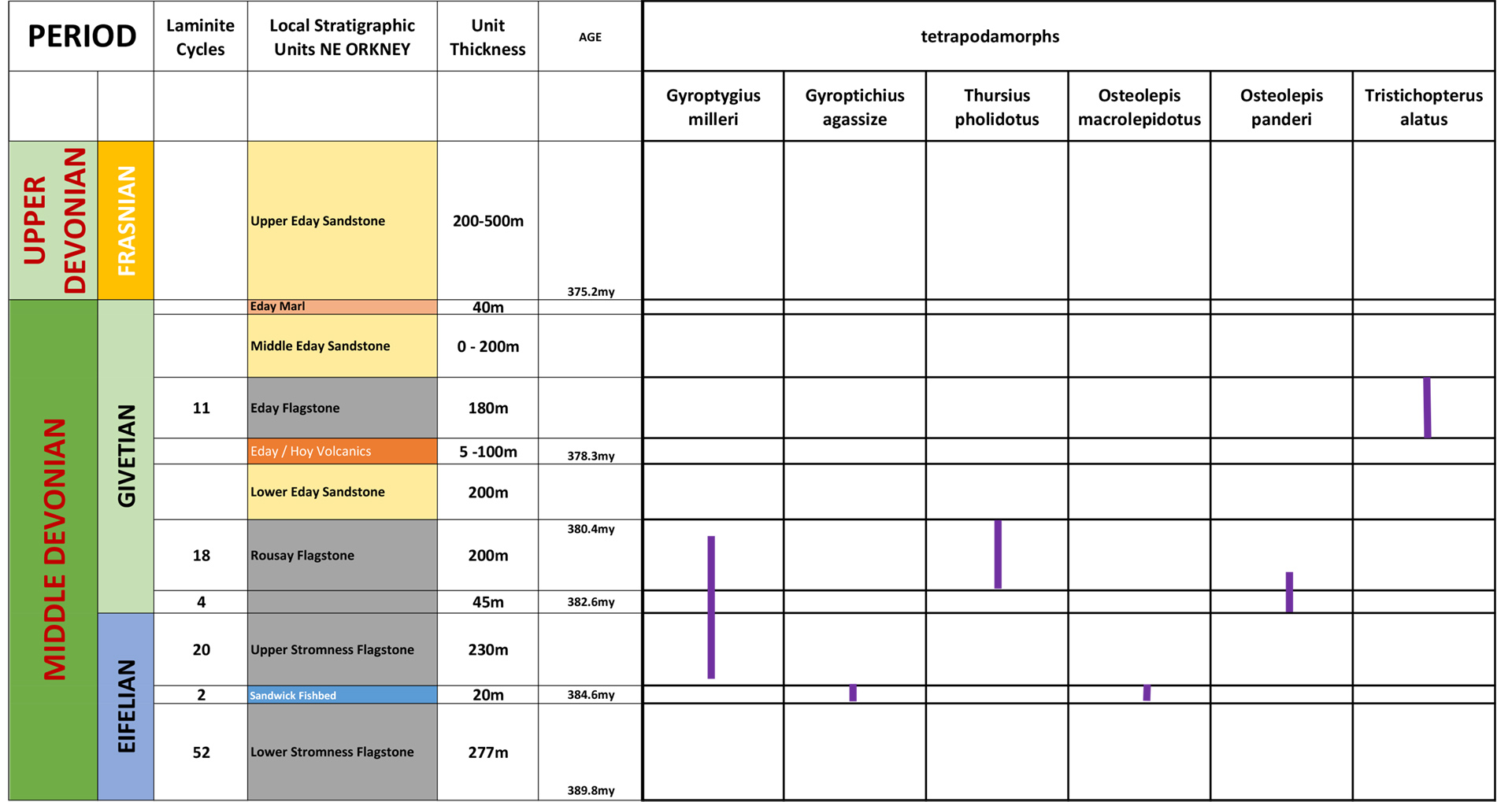 The tetrapodomorphs (part of the sarcopterigians (Sarcopterygii) or lobe finned fish) played an important role in the Orcadian Basin and eventually the evolution of man.

In the lake, these fast swimming fishes with their strong teeth were the top predators. They are evolutionary closely related to the first vertebrate land animals during the Upper Devonian.

The similarity of the skull, dermal skull bones and the bony structure supporting the paired fins are striking when compared with the first vertebrate land animals.

The sarcopterygians (except the dipnoans) were thought to be extinct, but in 1938 a strange fish was caught at sea in South Africa by a local fisherman. This specimen was presented to Marjorie Courtenay-Latimer who worked at the local natural history museum in East London, South Africa. Later this fish was identified by the fish expert Dr James Smith as a coelacanth. Fossil coelacanths are known from many localities and ages. The first well preserved specimens came from Germany, found in the same Jurassic limestones that are so famous for the bird-like dinosaur Archaeopteryx. This discovery had an impact on the scientific community comparable with the finding of the tomb of Tutankhamun.

There is no doubt anymore that the first vertebrate land animals must have evolved from the tetrapodamorphs. In the near future newly, discovered material will certainly make the picture of this step from water to land more complete.

The tetrapodamorph osteolepids (except the tristichopterids – see below) from the Middle Devonian of Orkney all have a hard, shiny layer on their bony scales called cosmine. This is composed of a layer of dentine with a thin layer on top of enameloid or enamel (depending on the publication). This layer is very hard and protects the fish against predators and harsh environmental conditions. However, if the fish grows it first needs to get rid of the cosmine. The cosmine layer is reabsorbed by the body and after that the scales can grow and a new cosmine layer is formed. The fish is vulnerable during the time of resorption and growth. Sometimes specimens are found lacking the cosmine layer.

Most likely the process of resorption and growth and formation of a new cosmine layer is a seasonal phenomenon and happens probably yearly.

See for examples in the morphology and histology below.

The histology of Gyroptychius agassizi looks very much like the one seen in Gyroptychius milleri but the preservation in G. milleri is often better, so we only show G. milleri here. 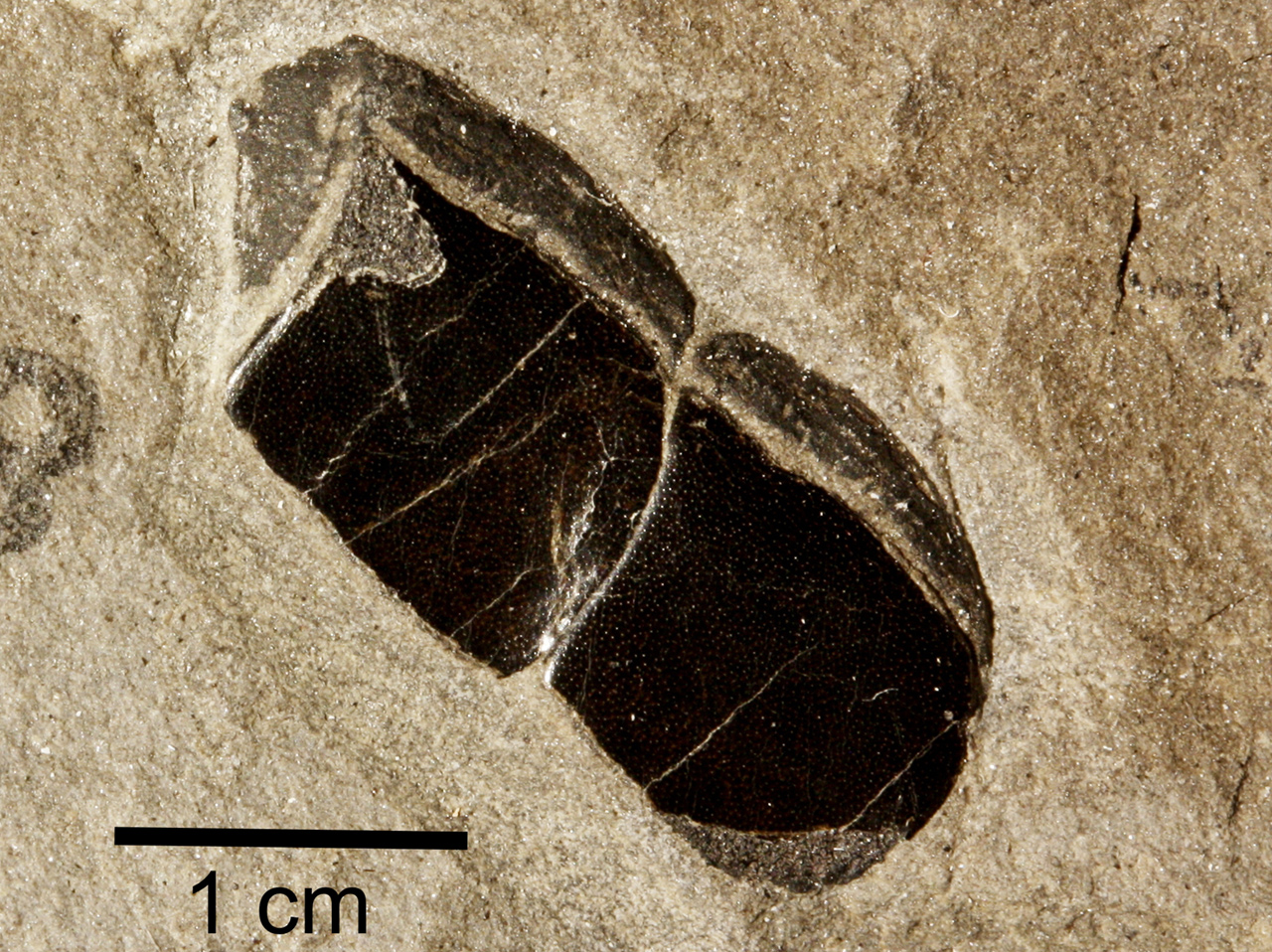 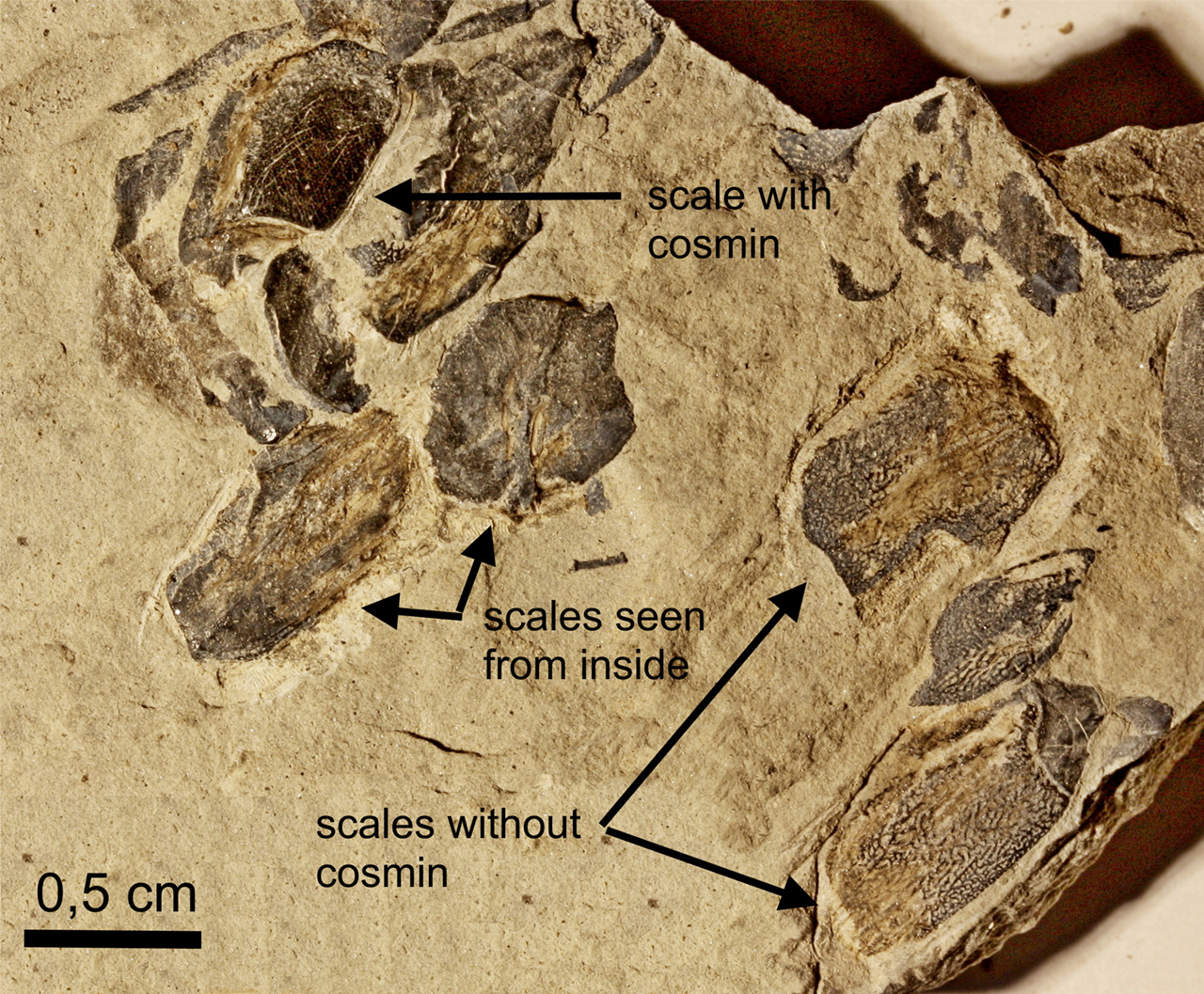 Scales with and without cosmine 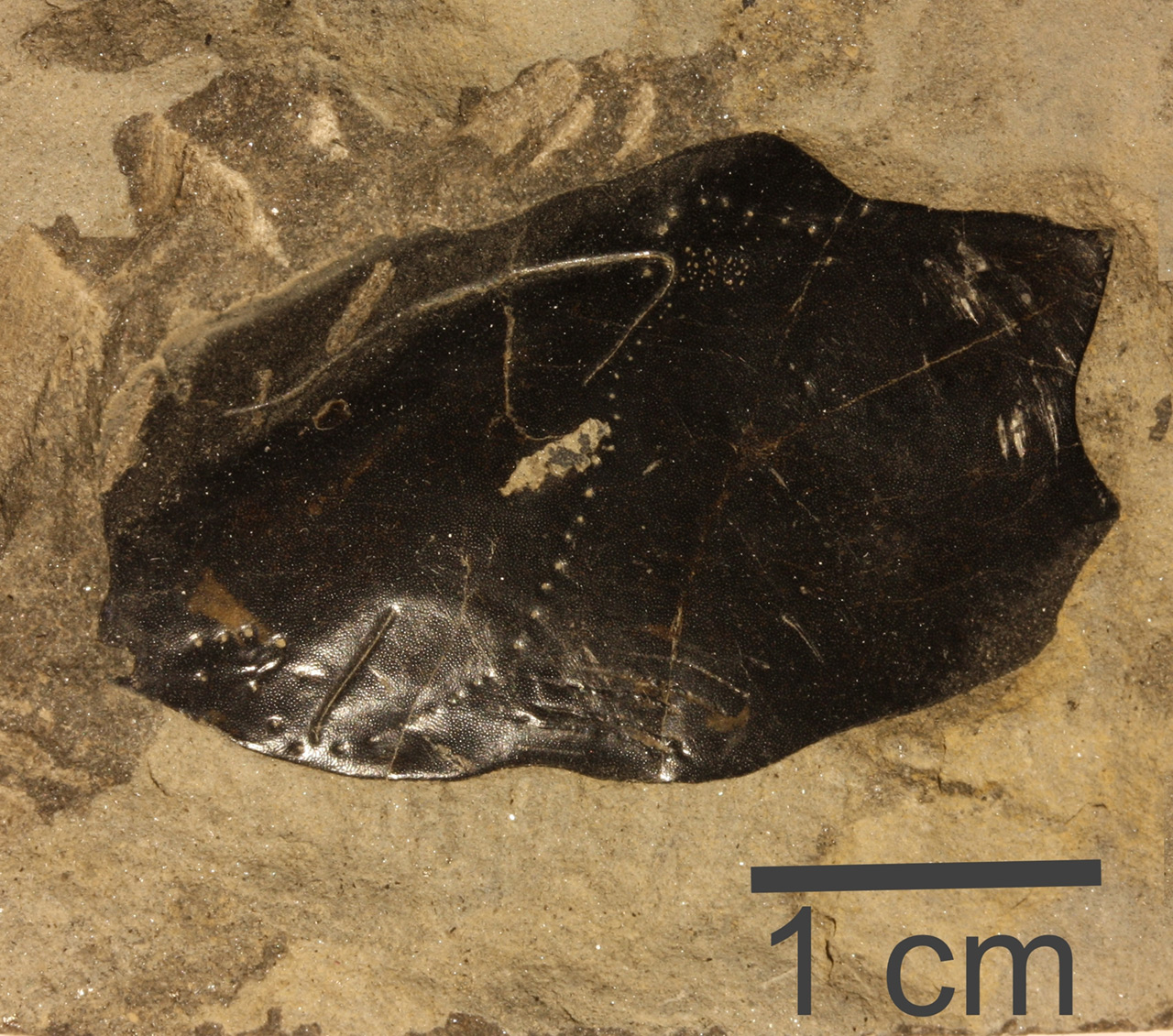 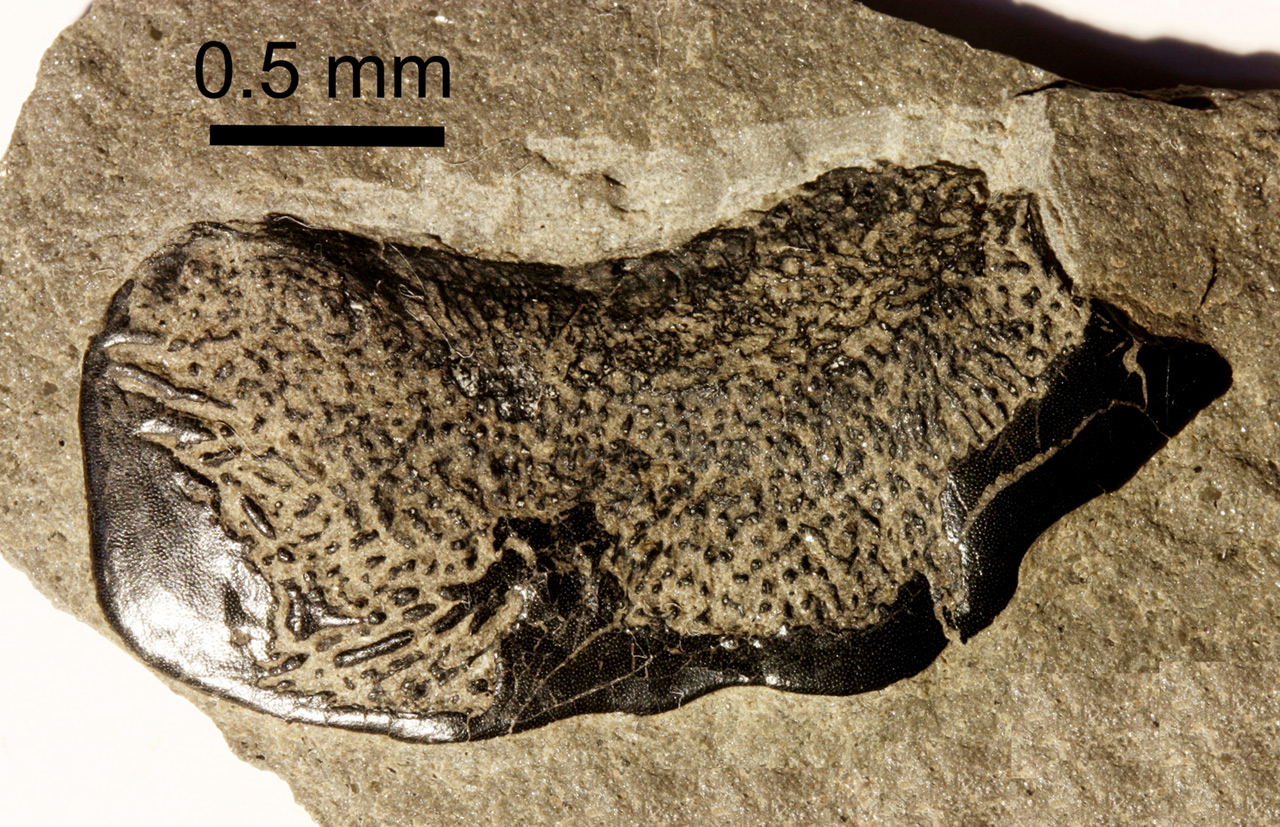 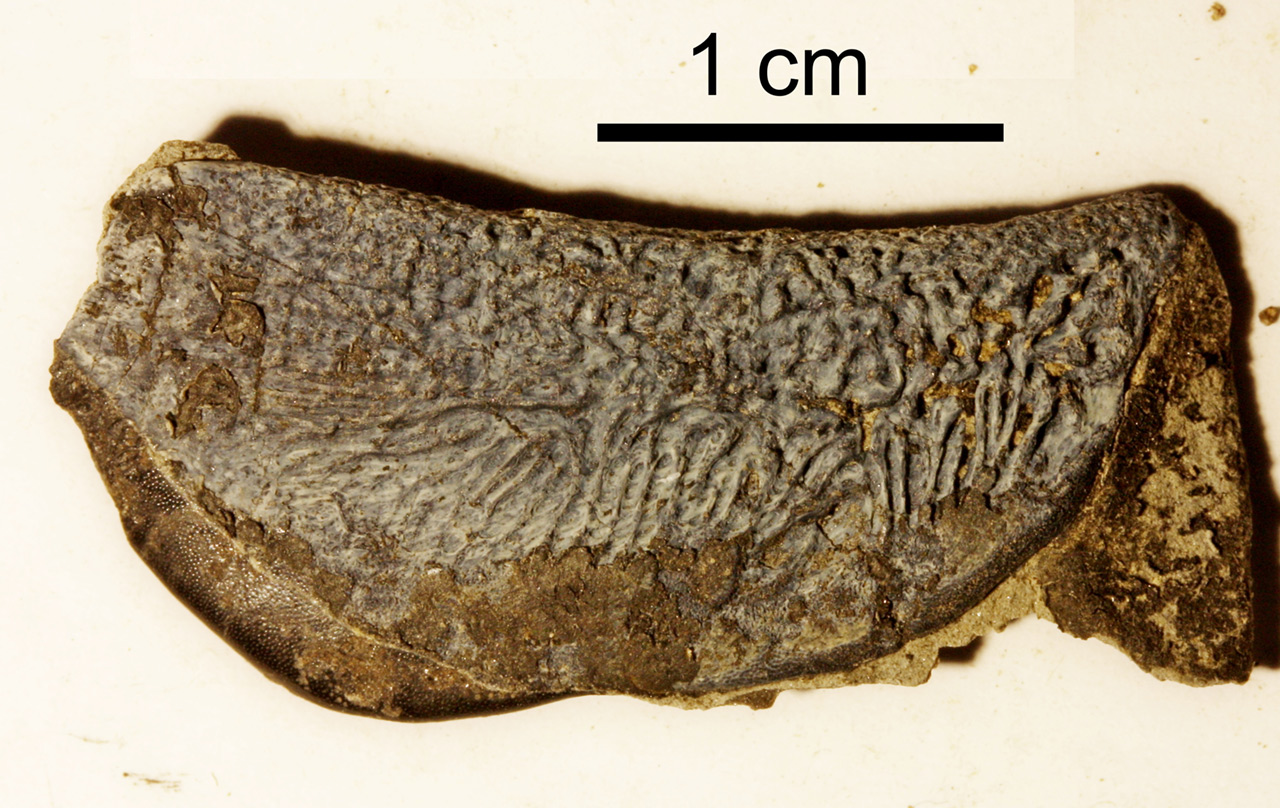 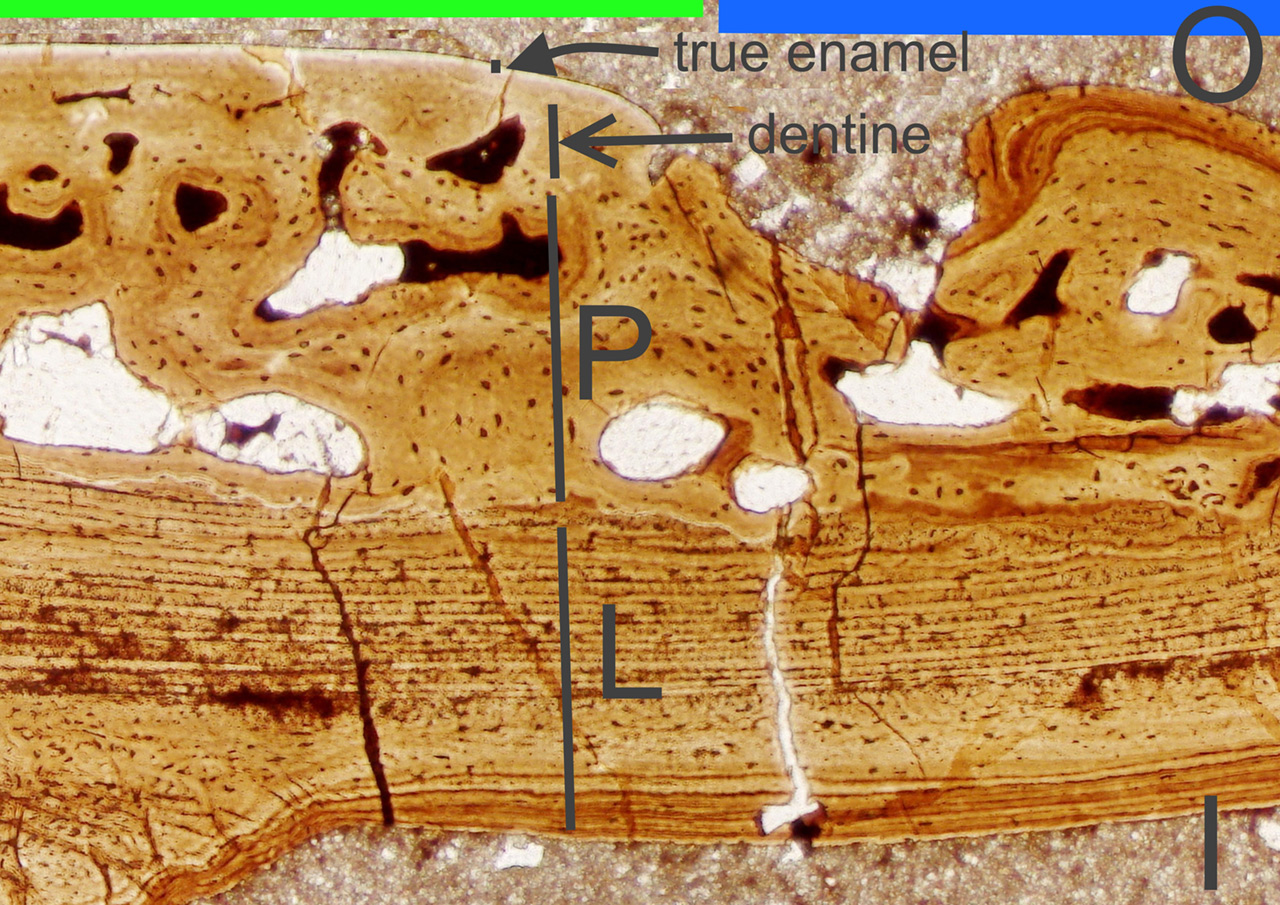 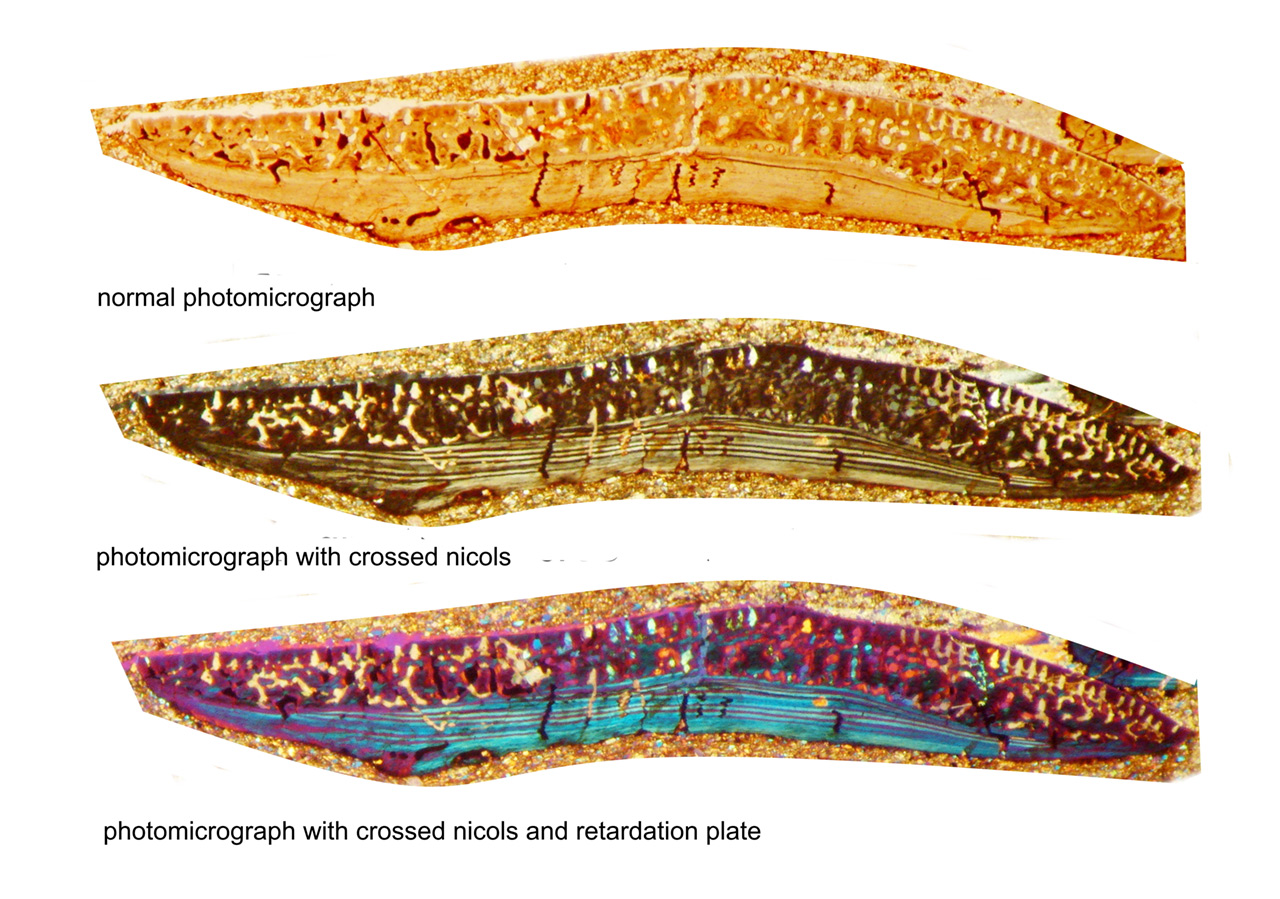 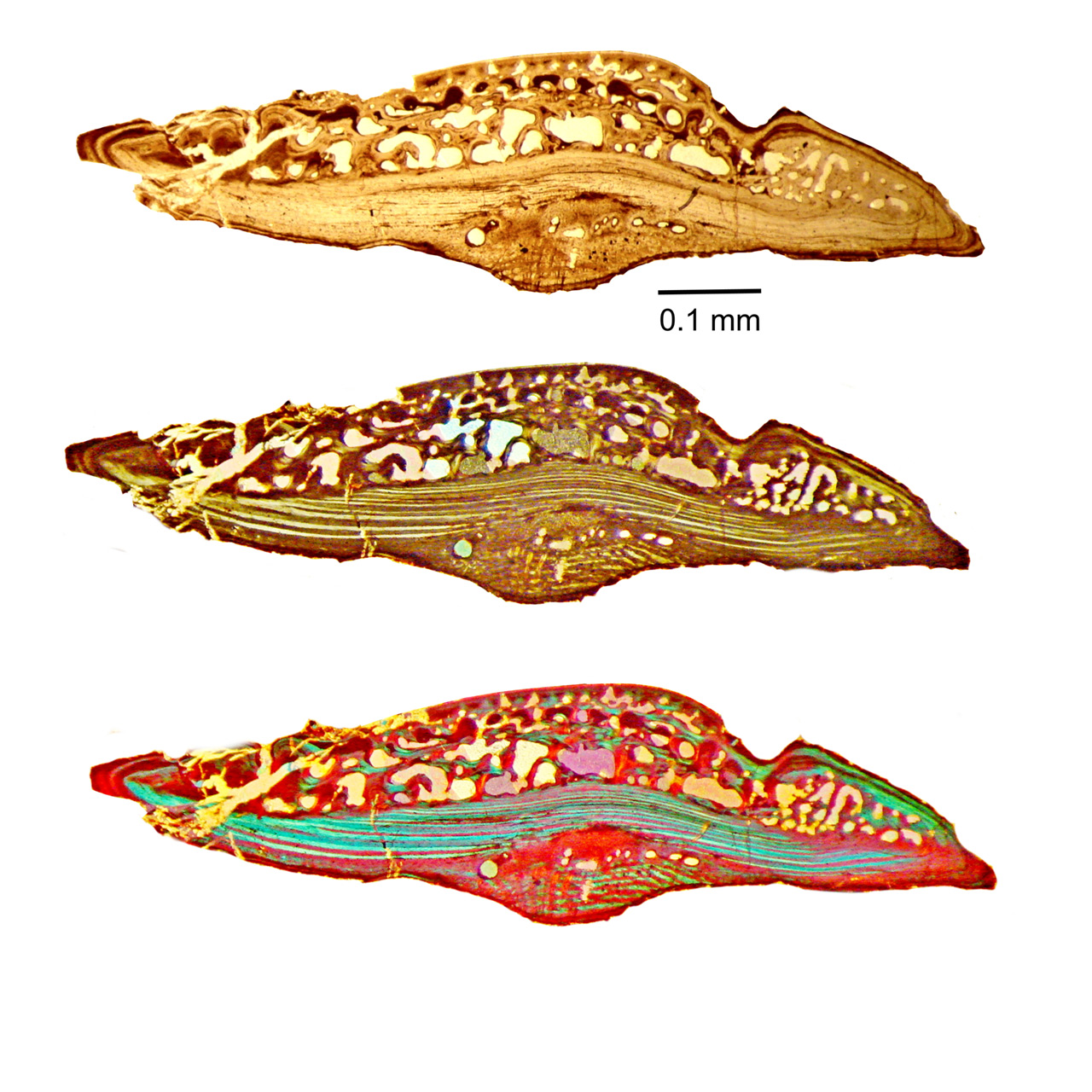 Scale showing yearly growth with the help of polarizing microscopy 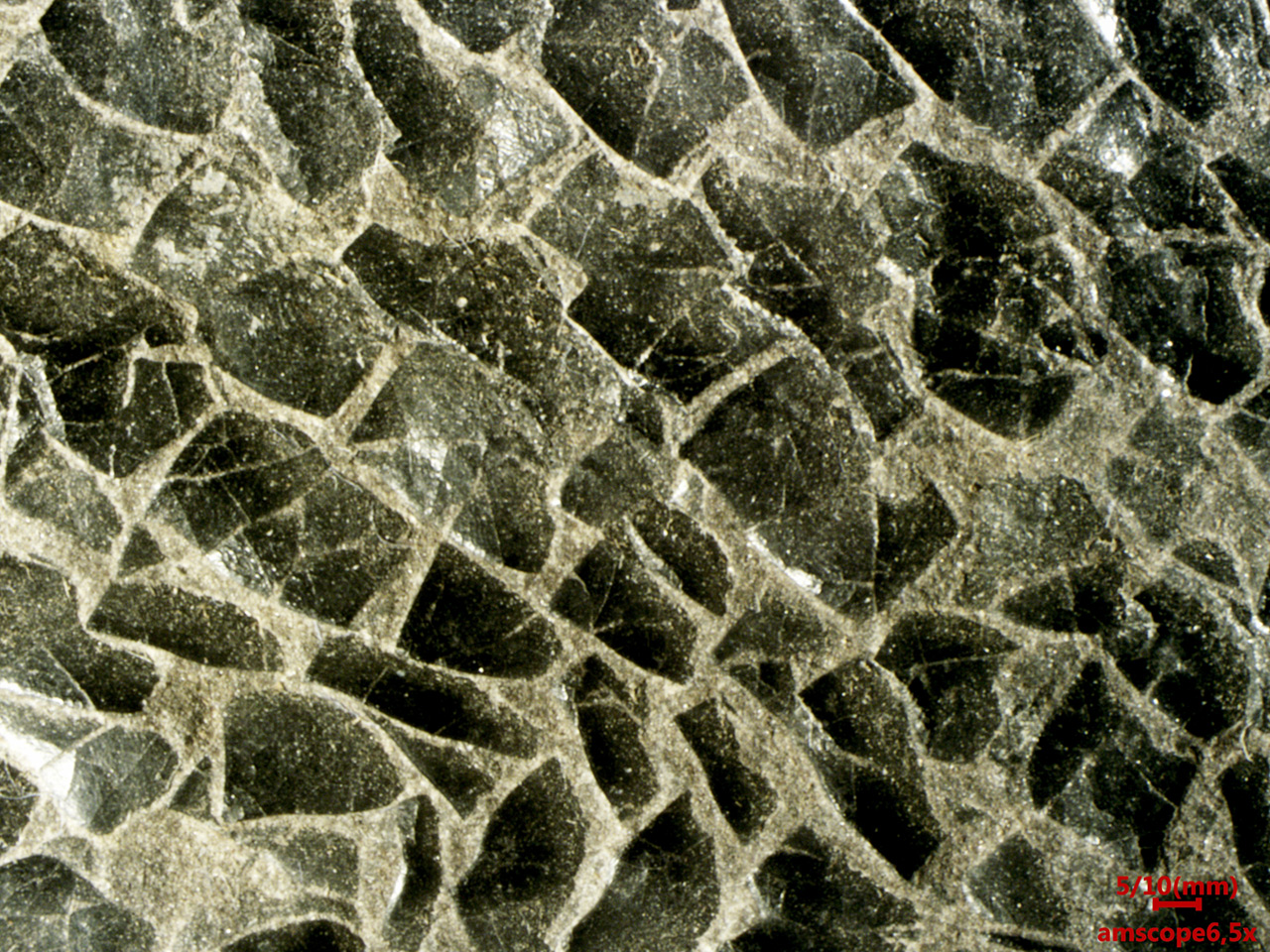 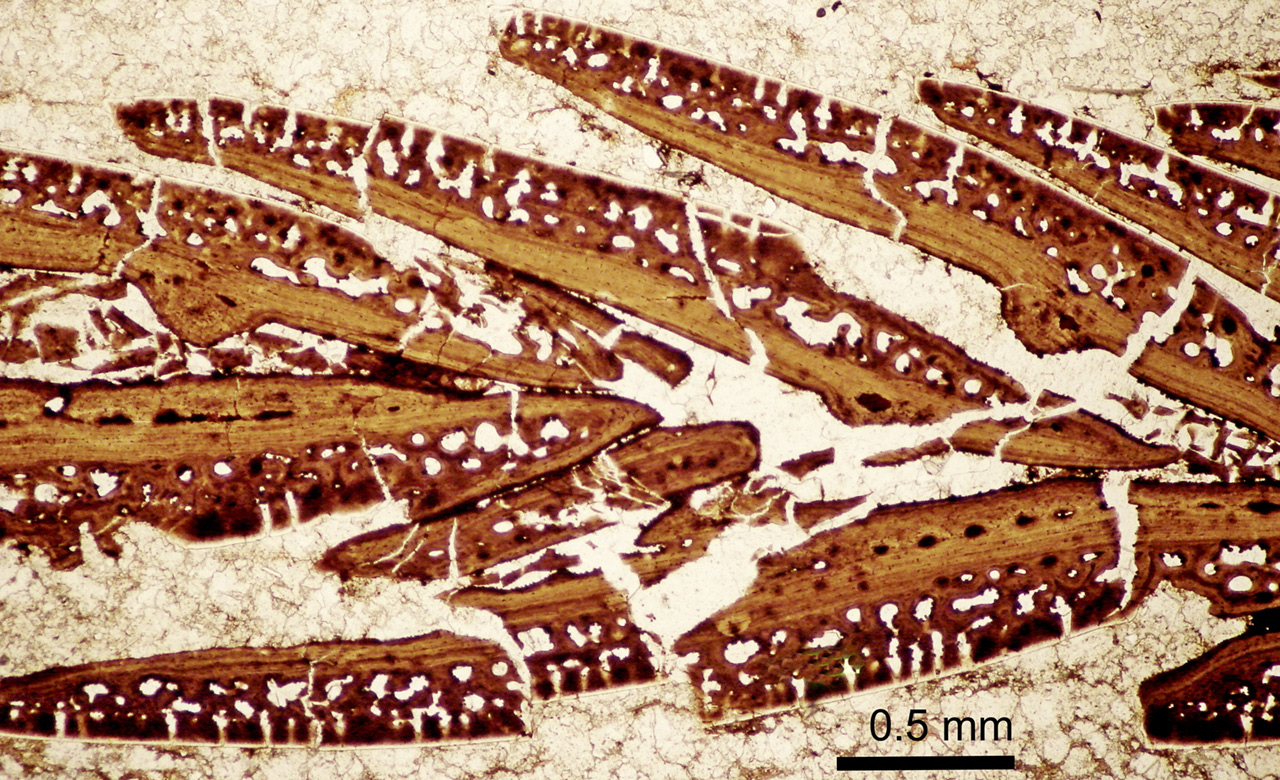 Scales in a fish and in section 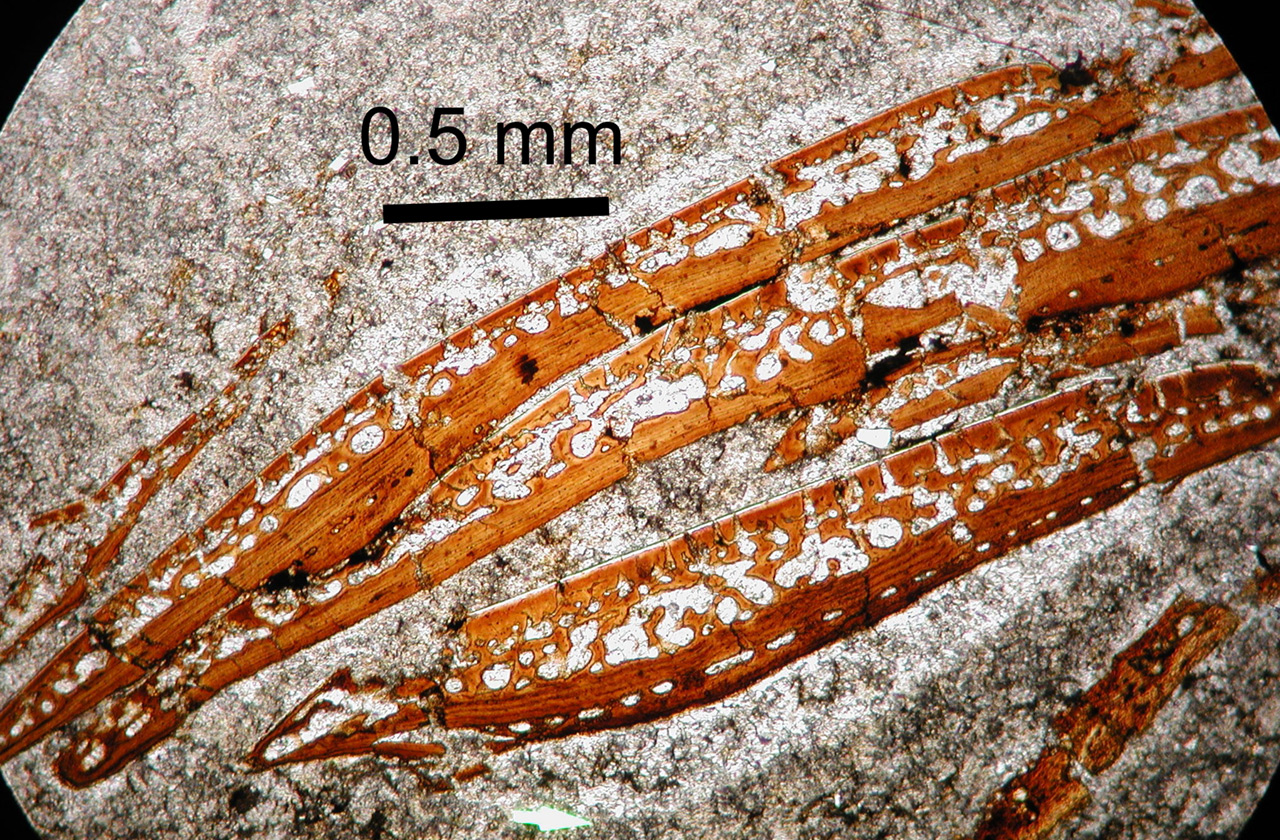 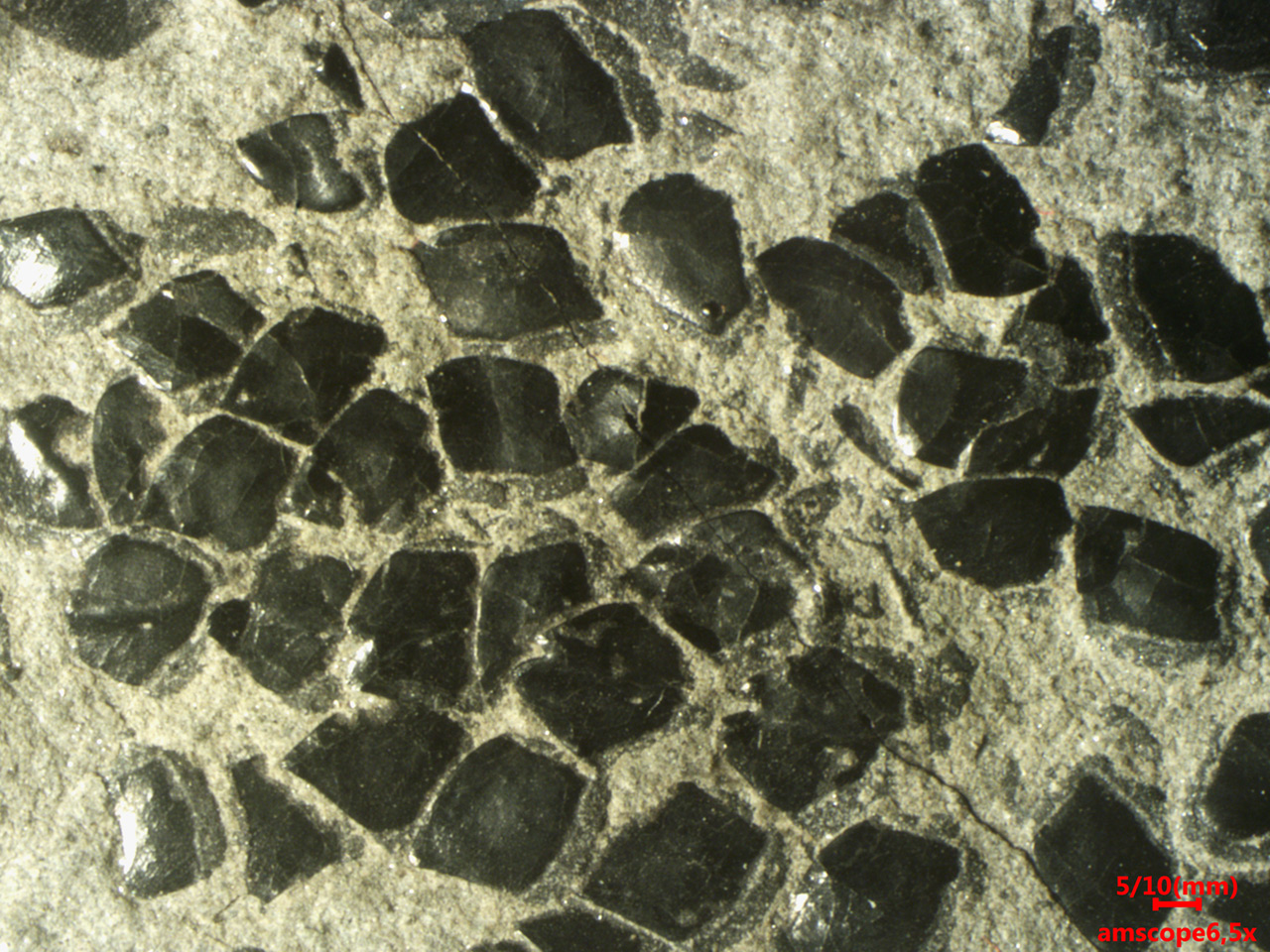 Scales of scattered fish and scales in thin section 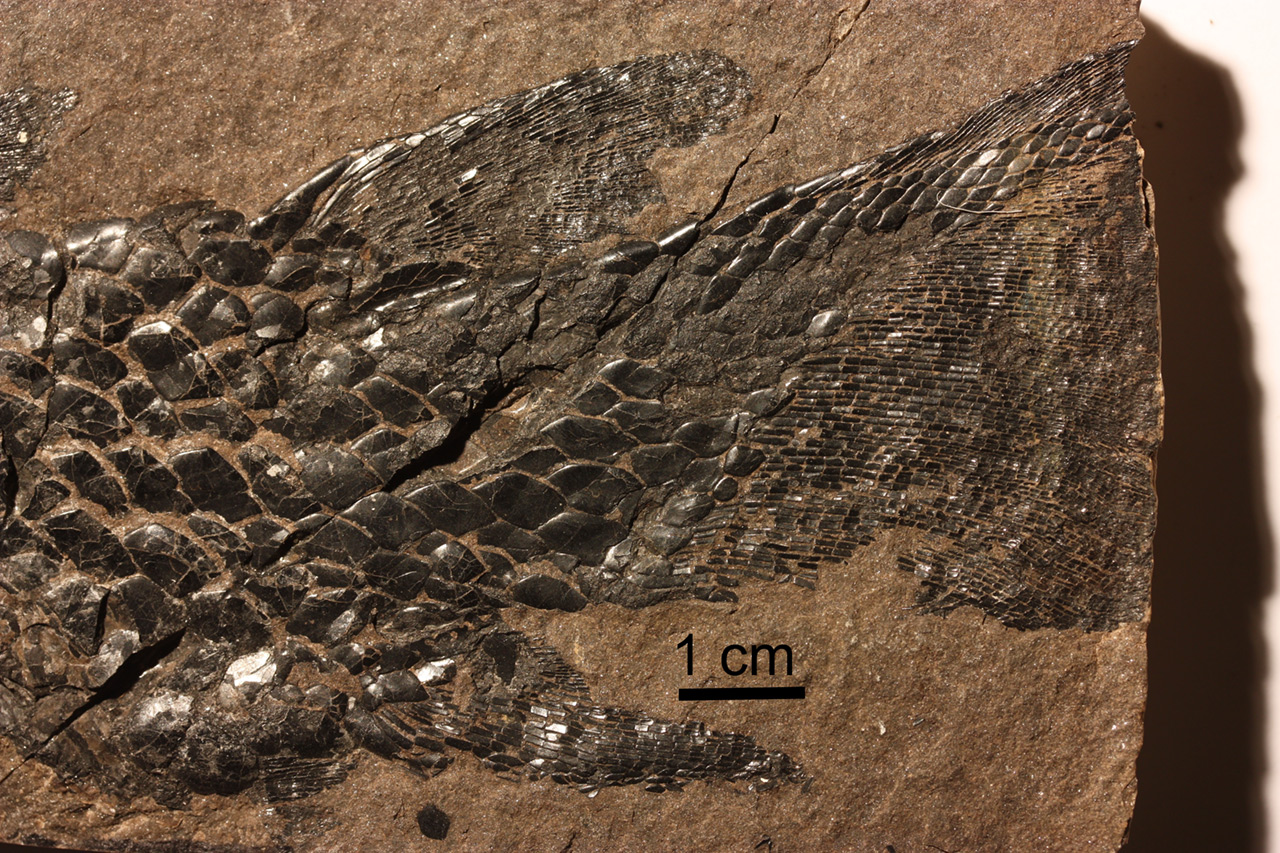 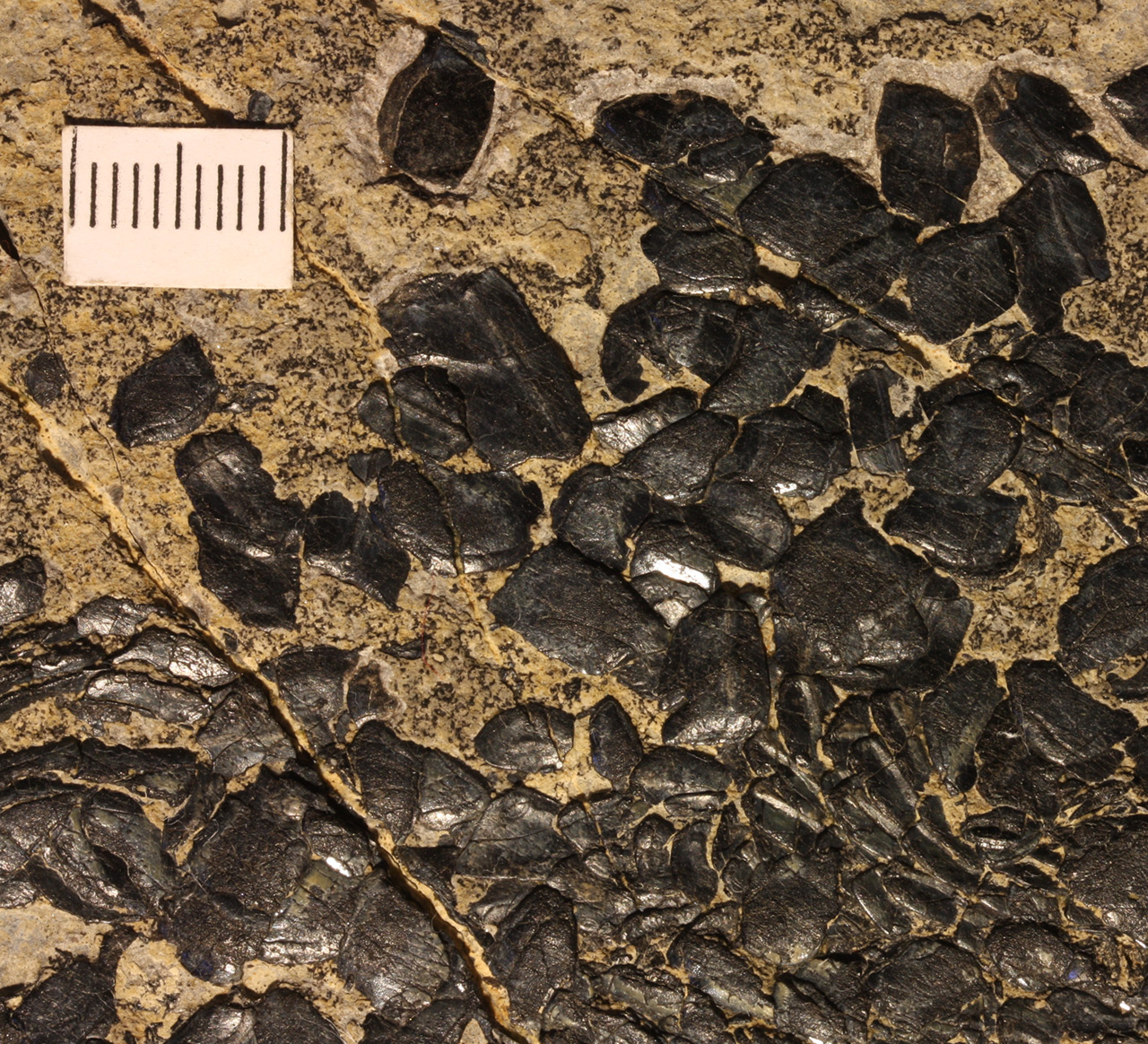 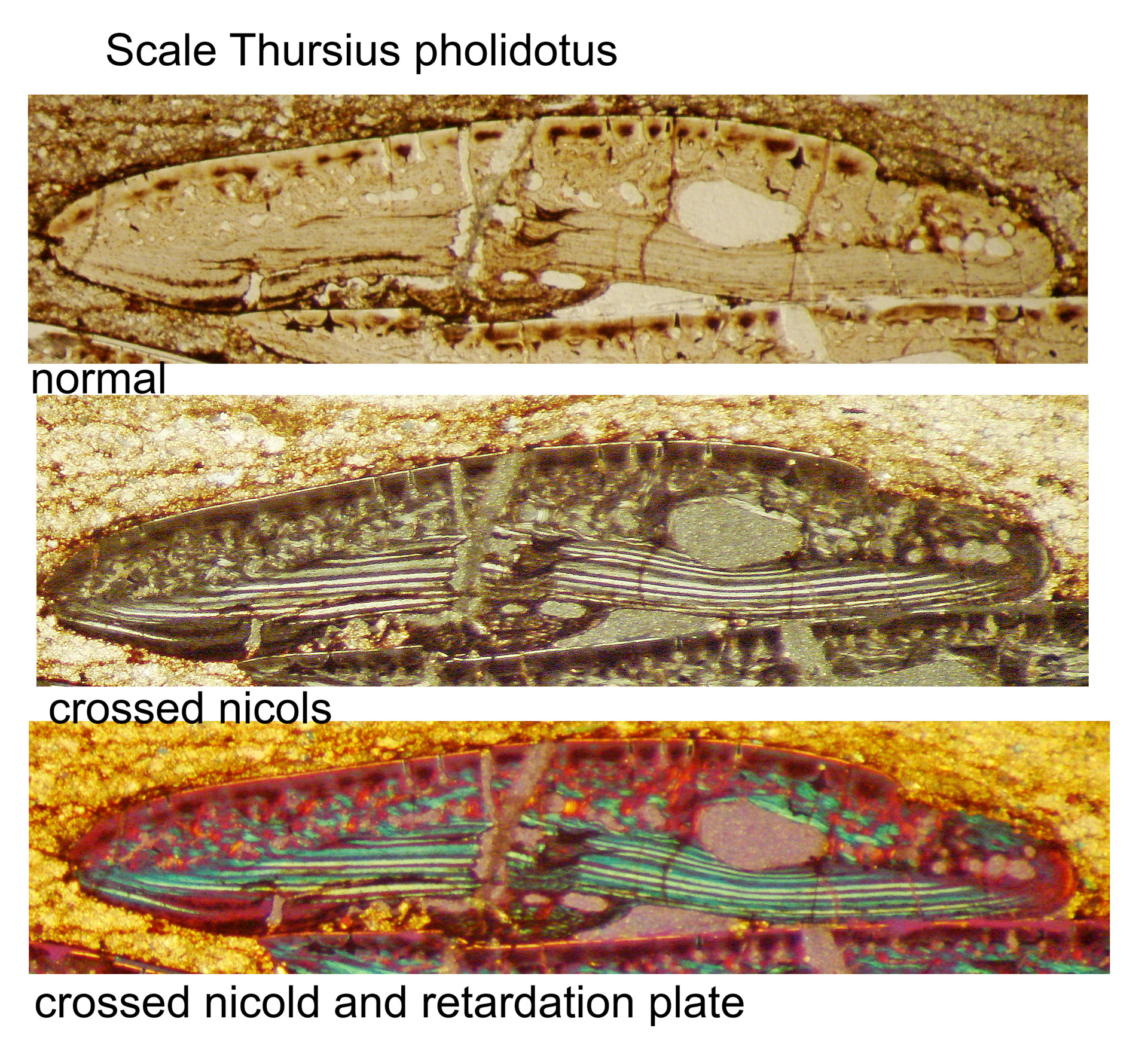 Here the enamel shows in the above picture as a thin orange line or in the one with crossed nicols only as a white line. 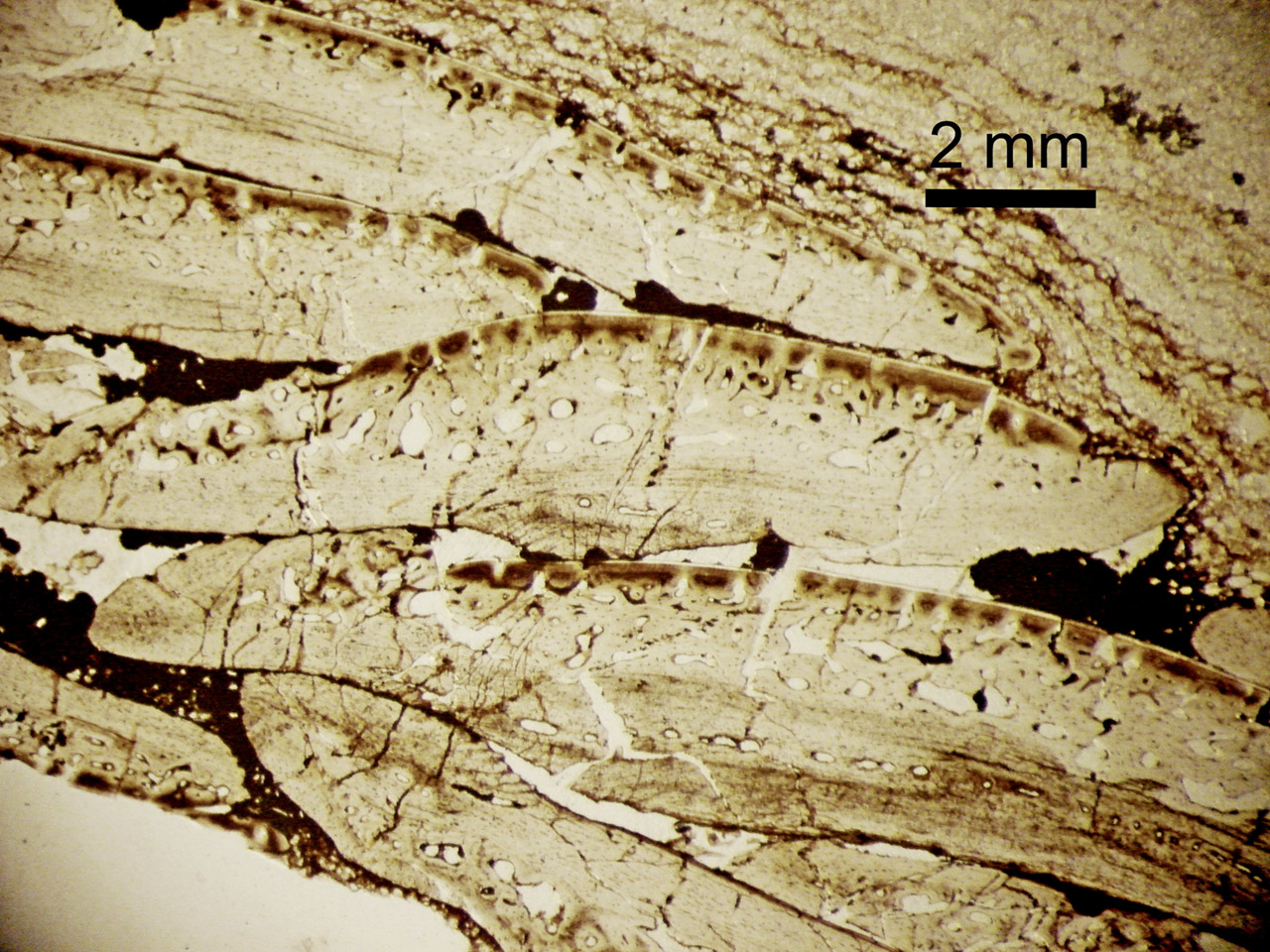 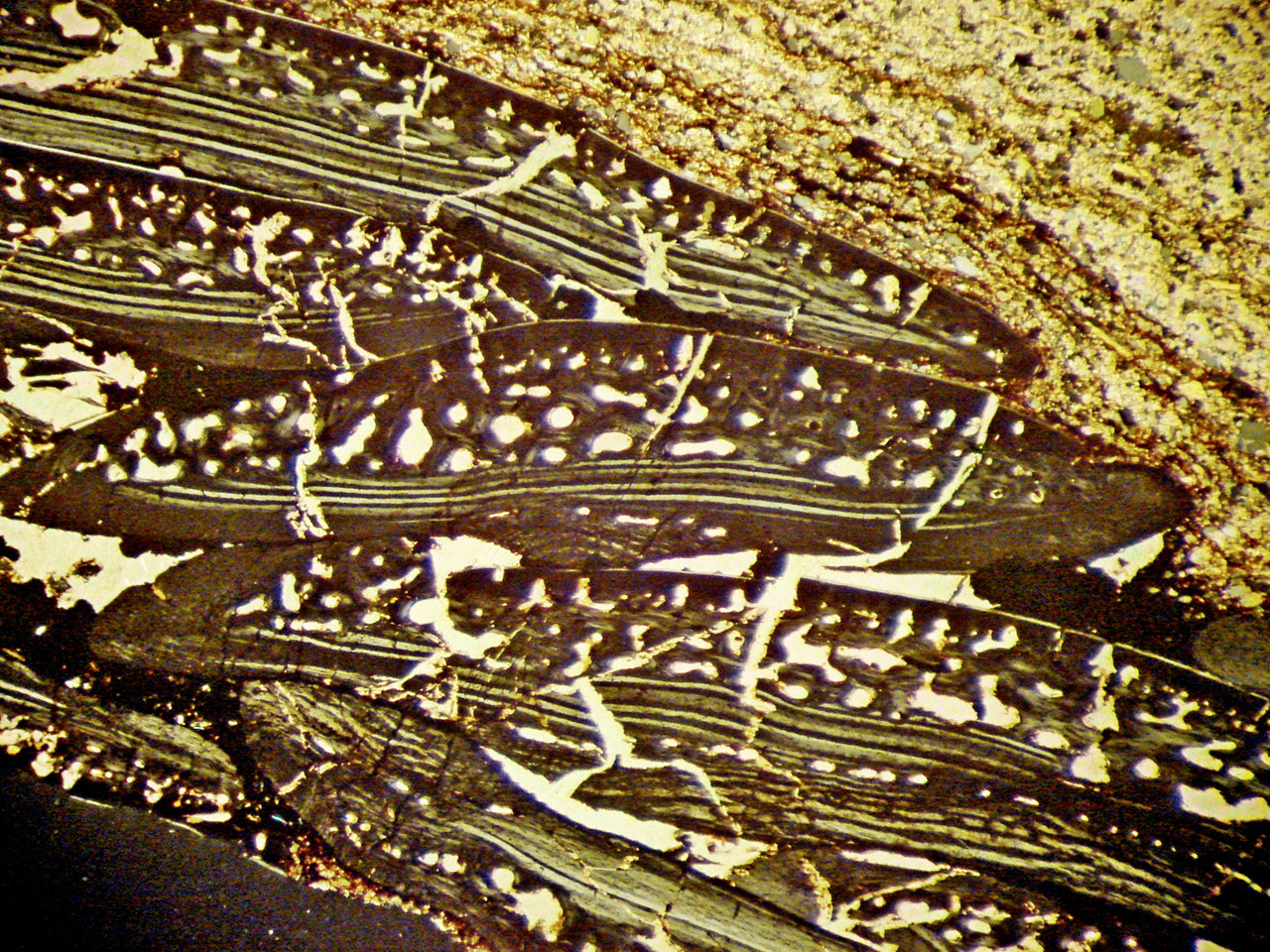 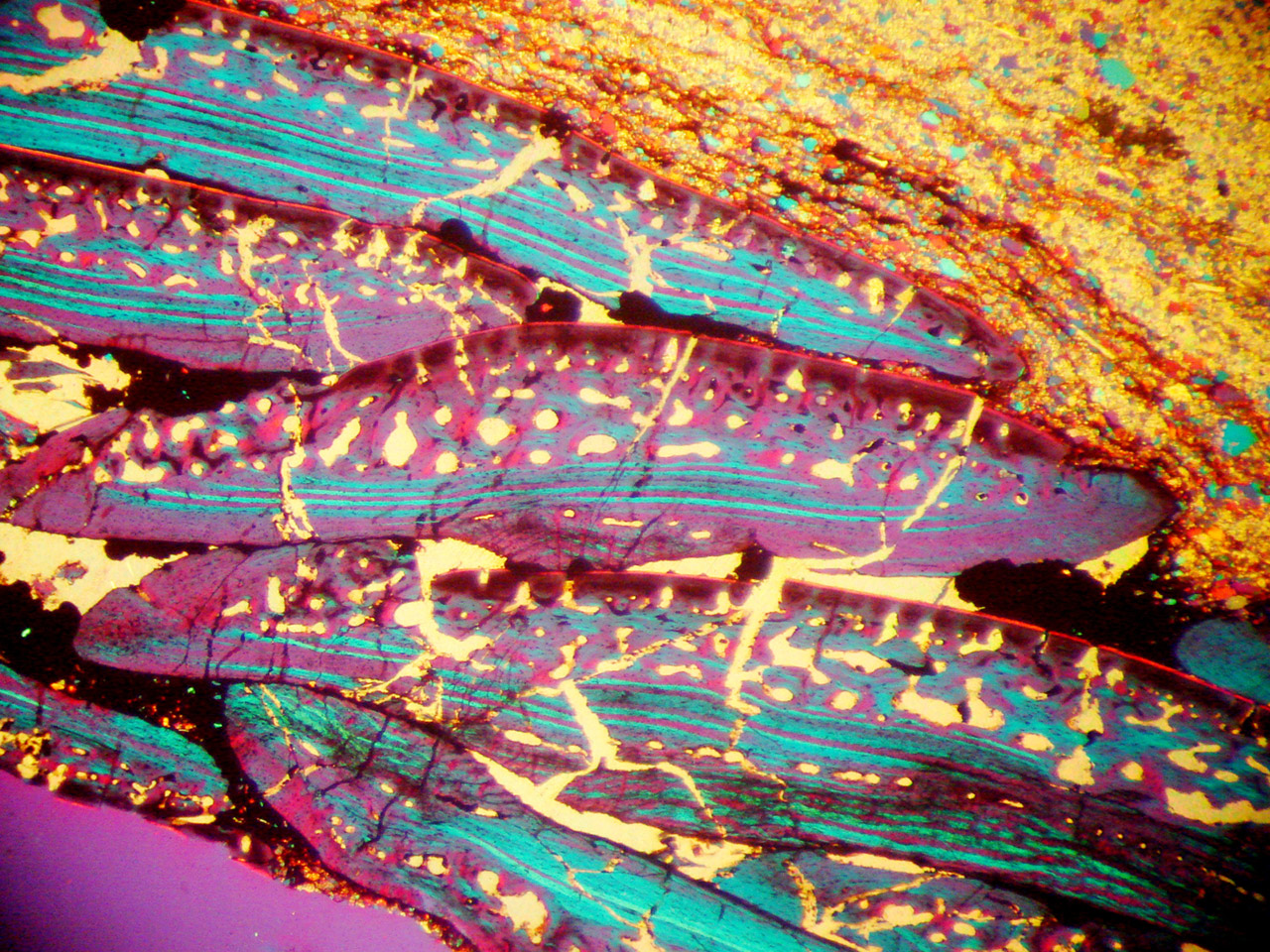 Again three pictures of scales in a thin section with the polarizing microscope.

This species does not have a cosmine cover on the scales. The teeth have a fine linging with enamel but the scales are naked! Below some pictures of a scale on the surface and several in sections. 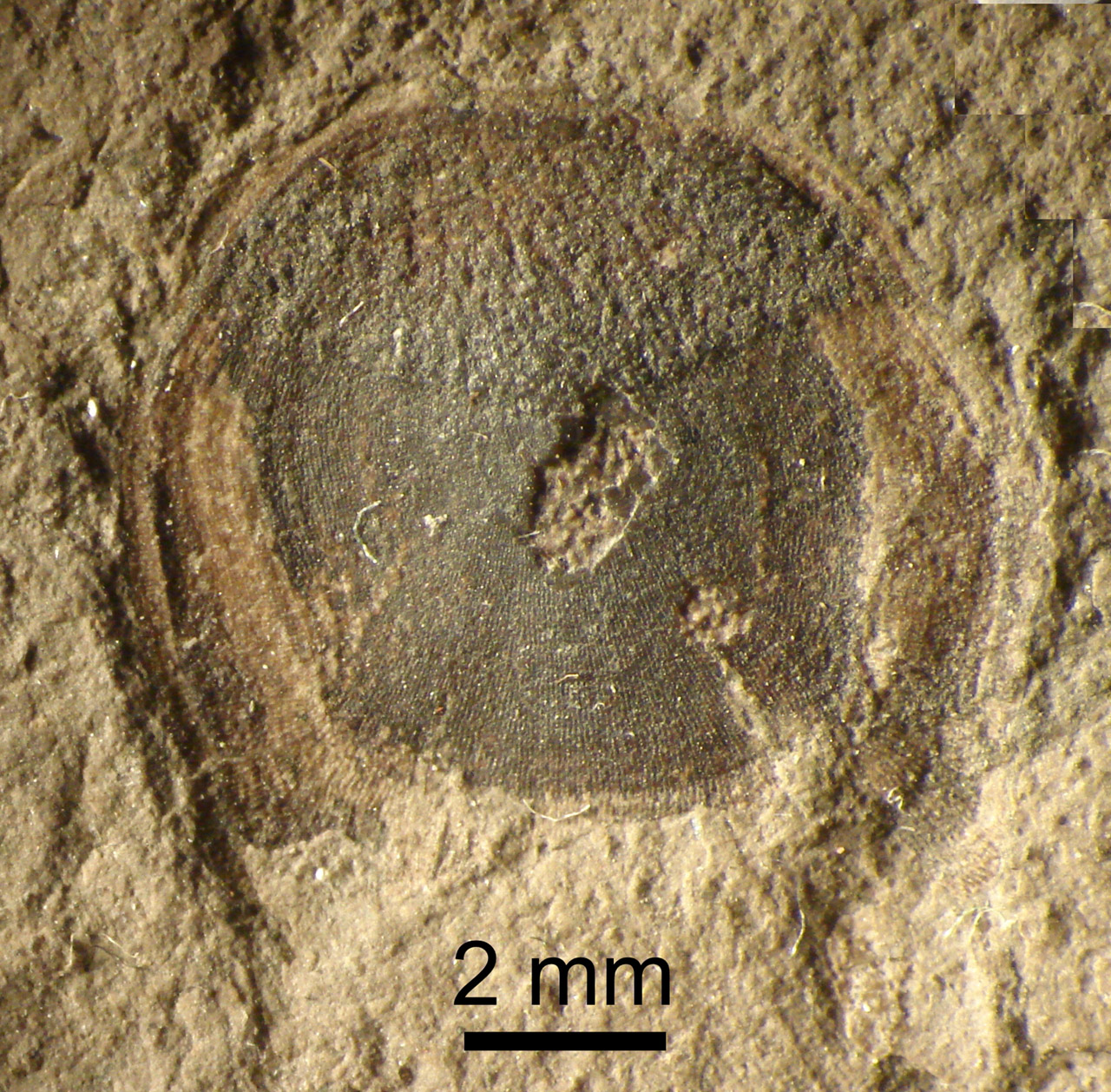 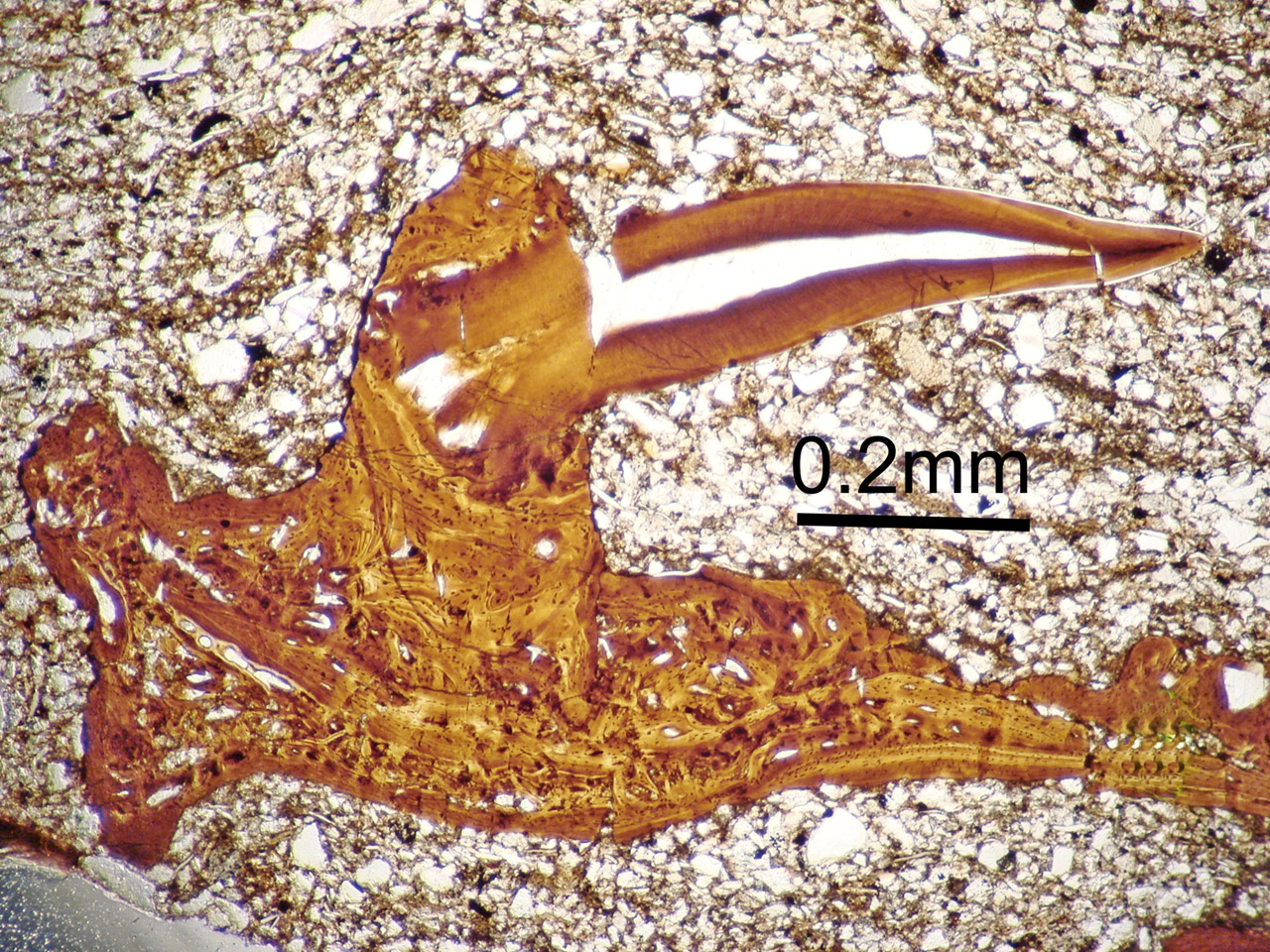 Tooth in the lower jaw with an enamel lining at the tip.