The generalised pattern of flow of the last ice sheet to cross Orkney has been known for over a century. The orientation of striae, distribution of erratics and the presence of shelly till leave no doubt that ice has moved from the bed of the North Sea across Orkney and out towards the Atlantic continental shelf. Many questions remain however concerning this final phase of glaciation, including its timing and extent, the possibility of significant fluctuation in patterns of ice flow through time and the reasons for the divergent flow of Scottish ice across the islands (Sutherland and Gordon 1993). 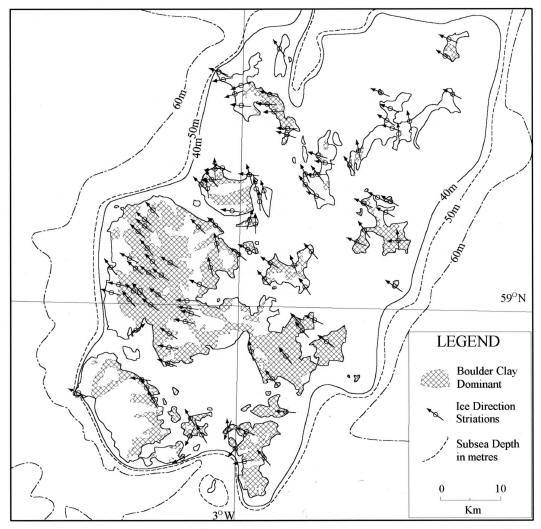 In Caithness and Orkney, a key question for the extent of the last (Late Devensian) ice sheet is the age of the shelly till or tills in these areas. Amino acid ratios suggest that many included shells are of Oxygen Isotope Stage 5 age or older and it has been inferred that the tills are of Early Devensian age (Bowen and Sykes 1988; Bowen 1989; Bowen 1991). It is clear however that at some sites, notably Dunbeath, Caithness, and Suckquoy, Mainland, the included shells are younger, probably Stage 4 or 3 in age (Bowen and Sykes 1988; Sutherland 1991). At least some shelly tills therefore date from Stage 2. Even tills which incorporate only Stage 5 or older shells may be of Stage 2 age if the source material for the till was marine mud of Stage 5 or older age. Published data is too sparse to conclude that all shelly tills in northern Caithness and Orkney are of Early Devensian age (Bowen 1991), although some may be of this age. Instead, the regionally consistent patterns of ice movement in Caithness and Orkney, the interdigitation with inland tills and the relatively minor periglacial disturbance suggest that the shelly tills belong mainly to the Late Devensian cold stage (Hall and Whittington 1989).

The last Scottish ice sheet built up or advanced after 30 ka and there was contemporaneous growth of the much larger Scandinavian ice sheet. Both ice sheets advanced into the North Sea basin. The apparent absence of glacial deposits from the axial zone of the northern North Sea has been taken as evidence that the two ice sheets did not meet. However the interpretation of linear deeps on the bed of the northern North Sea as subglacial valleys or meltwater channels has led to the suggestion that the two ice sheets did meet (Wingfield 1989) and that the absence of till is a result of subsequent erosion (Ehlers and Wingfield 1991). More recently radiocarbon dates on shells and foraminifera from the outer Moray Firth have suggested that the maximum of the Late Weichselian glaciation was reached much earlier than previously supposed at around 24 ka and that the Scandinavian and Scottish ice sheets were probably confluent at this time (Sejrup, Haflidason et al. 1994; Ekman 1995). After a retreat from the maximal position, the ice sheets readvanced around 18 ka. The Scottish ice sheet was previously widely held (Hall and Bent 1990; Boulton, Peacock et al. 1991) to have terminated at its maximum at moraines off the east coast of Scotland at this time (Figure 2.4). In the central North Sea, till of the Wee Bankie Formation (Stoker, Long et al. 1985) has been mapped on the sea bed only for only a few tens of kilometres offshore from Stonehaven and terminates eastward in a zone of sea-bed ridges interpreted as end moraines. This Wee Bankie Moraine marks an eastern limit of grounded ice in the Late Devensian (Thomson and Eden 1977; Stewart 1991). Seismostratigraphy indicates that the Wee Bankie Formation passes eastward into the arctic and glaciomarine deposits of the Marr Bank Formation (Stoker, Long et al. 1985; Stewart 1991). Dates from borehole 74/7 of 17.7 and 21.7 ka for shells from the Marr Bank Formation indicate a Late Devensian age (Holmes 1977). These Formations can be traced northward into the outer Moray Firth, where tills extend east to the Bosies Bank Moraine, beyond which apparently only glaciomarine glaciomarine deposits occur (Hall and Bent 1990). In the latest model of Late Devensian glaciation (Sejrup, Haflidason et al. 1994), the Wee Bankie and Bosies Bank Moraines are regarded as readvance moraines.

Extensive glaciation of the North Sea, and perhaps even a complete ice cover, is consistent with evidence from the West Shetland shelf. Here a series of submarine morainal banks occur some 100-125 km NE of Orkney and mark the phased retreat of an ice sheet from a maximal position close to the shelf edge. The associated tills and glaciomarine deposits belong to the Otter Bank sequence but are not closely dated (Stoker, Hitchen et al. 1993). Radiocarbon dates on shells from glaciomarine sediments near to St Kilda show however that the Hebridean ice sheet extended close to the shelf edge at 22 ka (Peacock, Austin et al. 1992). There appears to be a regionally consistent picture of ice from the Hebrides, the Scottish mainland and Shetland spreading far out on to the continental shelf in the Late Devensian.

The sequence of glaciation on Orkney may have been as follows. Orkney was overwhelmed once more by Scottish ice between 30 and 24 ka. Its peripheral location probably will have allowed the initial build up of small glaciers on Hoy and their coalescence created an ice dome that, together with the topographic barrier of the hills, was sufficiently large to divert the flow of the encroaching ice sheet around its margins. The ice was at its thickest over Orkney when it reached the shelf edge at the Otter Bank. The ice then thinned and retreated before a readvance at around 18 ka. The extent of this readvance is unknown but the drift limit mapped north of the Bosies Bank Moraine lies some 70 km E of Orkney and suggests a contemporaneous and relatively thick ice cover on the islands. The Hebridean ice sheet margin remained in the vicinity of St Kilda until as late as 15.3 ka (Peacock, Austin et al. 1992) but ice had retreated to the present Buchan coast by 14.8 ka (Hall and Jarvis 1989). This suggests rapid ice retreat around 15 ka and the first emergence of high ground on Orkney.

The pattern of ice flow across the islands is reasonably clear. Striations and roches moutonées show conclusively that ice has moved towards the NW and NNW, from the North Sea to the Atlantic. This is consistent with the presence of shell fragments in tills on the eastern isles and directions of erratic carry. Erratics include a number of rock types exotic to the islands: limestones (including chalk), igneous lithologies, and the famous Saville Boulder of possible Scandinavian origin (Wilson et al. 1935). In the northern islands, erratics have even been assigned to the Grampians and the Central Valley of Scotland (Peach and Horne 1880) but such a direct carry seem unlikely in the light of current knowledge of flow lines of the last Scottish ice sheet. Instead, these erratics, if they are of mainland origin, may have released by glacial erosion of Devonian to Cenozoic conglomerates or older Quaternary deposits in the North Sea. 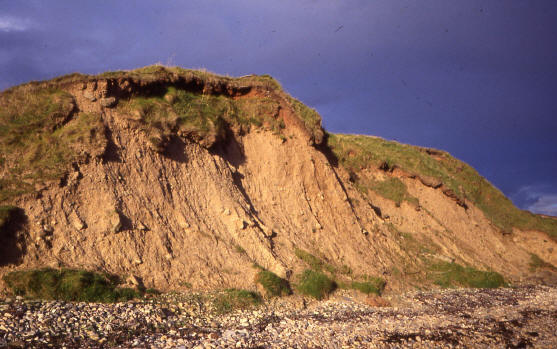 Detailed investigations by Rae (1976) established important links between directions of ice flow and the lithological characteristics of tills. By examining till lithology, till fabric and underlying striated bedrock surfaces, Rae was able to demonstrate an early ice flow from between S and SSE, a succeeding SE flow and a final flow from ESE and E. This anticlockwise rotation in flow apparently occurred during a single phase of glaciation as no interstadial sediments are known from between the three till units. Key sites for the study of superimposed tills include Den Wick and Scara Taing but a total of over twenty sites are known (Rae, 1976).

A key question for the glaciation of Orkney is what caused the flow of ice from the North Sea to the Atlantic shelf. In the last century, Peach and Horne (1880) proposed that Shetland was glaciated by ice from Scandinavia and that convergent Scottish and Scandinavian ice streams crossed Orkney. This idea was supported by the presence of erratics of apparent Scandinavian origin on Orkney [Saxton, 1919 #1190] and Shetland (Flinn 1992). The influence of Scandinavian ice is however difficult to substantiate. On Shetland the passage of Scandinavian ice, if it occurred, was prior to the last phase of glaciation, when ice moved radially outwards from an ice dome over the islands (Ross, Hall et al. 1993). On Orkney, only the Saville Boulder on Sanday appears to be undeniably of Scandinavian origin (Rae, 1976) and it is possible that this block was first carried from Norway by an ice sheet or iceberg and then later entrained by Scottish ice. There is therefore no firm evidence for the movement of Scandinavian ice across the Northern Isles. The diversion of Scottish ice by the larger Scandinavian ice sheet remains possible, especially as it now appears likely that the two ice sheets were coterminous at the Late Devensian/Weichselian maximum around 24 ka (Sejrup, Haflidason et al. 1994). Alternative or contributory suggestions are that the curving difluence of Scottish ice out of the Moray Firth reflects the movement of the last ice sheet from a rigid to a deformable bed (Hall and Bent, 1990) or the development of an ice dome over the Halibut Horst in the outer Moray Firth (Boulton, Peacock et al. 1991).

It is of interest that no reversal of ice flow is recognised on Orkney during the final stages of glaciation, when ice might be expected to have flowed towards the North Sea in eastern Orkney. Instead, the presence of hummocky moraine on west Mainland (Wilson et al. 1935) and Rousay points to ice remaining active and the continuance of E-W flow until close to the termination of the last phase of ice sheet glaciation. The valley moraines of north Hoy (Wilson et al. 1935) are of key importance in understanding the final stages of the deglaciation of Orkney but have received no detailed attention.

On Hoy there is clear evidence for a succeeding phase of local glaciation (Wilson et al. 1935; Rae, 1976). Small, arcuate end moraines occur, for example in the corries at Dwarfie Hamars and Enegars Corrie. Although not directly dated these possibly relate to the Loch Lomond Stadial and represent the last minor phase of glaciation on Orkney (Sutherland and Gordon 1993).

Orkney is dominated by Devonian sedimentary rocks deposited around 380 million years ago. These rest on basement granites and gneisses around 1000 million years old.