The great storm of 1862… swept the sea over the north end of the island of Stroma… and redistributed the ruin heaps there.
The waves ran bodily up and over the vertical cliffs on the west side, 200 feet in height, loading portions of wrecked boats, stones, seaweeds etc. on the top.
They rushed in torrents across the island, tearing up the ground and rocks in their course…..

1966. Italian steamship Michelangelo is hit by a 21-metre wave en route to New York. The water smashes through the bridge and into the first class compartments, killing two passengers and a crew member.

1995. The QE2 encounters a hurricane on a crossing to New York. She takes a 29-metre wave over her bow. “It looked as if we were going into the White Cliffs of Dover,” says Captain Ronald Warwick.

1998. Schiehallion, a BP Amoco floating production platform, is struck by a wave which smashes the fo’c’sle 18m above the waterline.

1995, North Sea. Statoil floating rig Veslefrikk B is severely damaged by a rogue wave. One crew member describes a “wall of water” visible for several minutes before it strikes.

Orkney experiences one of the highest wave energy environments in the world. The west coast is exposed to the full force of the Atlantic waves, with hundreds of kilometres of fetch, hurricane-force wind speeds and deep water close inshore allowing huge waves to arrive at the cliffs unbroken. The outer parts of the east coast must also experience some very large waves, as oil rigs in the northern North Sea has recorded some monsters over the two decades. 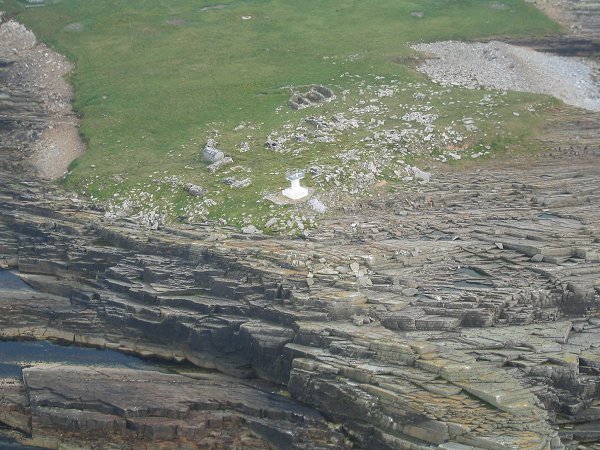 There is an increasing amount of evidence to suggest an increase over recent decades of wave heights in the North Atlantic. The Waves and Storms in the North Atlantic (WASA) project used a combination of modelling and observational data to report increases in wave height of 2.5-7.5mma-1 over the period 1955-94 (Gunther et al, 1998). This is supported by the observational data of Gulev and Hasse (1999), who indicate a 1-3mma-1 increase in North Atlantic wave height in the last 30 years, possibly linked to intensification of the North Atlantic Oscillation (NOA). If this is the case then there appears to be little reason to suggest that the maximum heights achieved by extreme waves should not also be subject to a similar increase over time.